DEVILOOF recently confirmed their upcoming European tour which will take place in 2020, a long-awaited announcement that many fans have been excited for! As we were way too eager, we decided to head to the band’s show in Tokyo to see what the European fans can expect. And indeed, it was an incredible experience!

Not only were we able to experience a brutal show, but we were also granted the honor to speak with the band and discuss their upcoming overseas plans that have the potential to stretch beyond Europe.

Joining us were all members of the band, guitarist Ray, bassist Daiki, vocalist Keisuke, drummer Kanta, and guitarist Aisaku.

Despite changing your line-up along the way, the music has kept its great qualities. What is the secret to being able to consistently produce the sound that is unique to DEVILOOF?

Keisuke: It’s about trusting each other, I guess? We’re not individuals but one unit that produces music. [In English] One for all! We wouldn’t be able to do it without all five of us.

You recently introduced two new members, guitarist Aisaku, and drummer Kanta. Would you mind telling us how it has been since joining the band?

Aisaku: It’s been really fun! That’s about it.

Kanta: As for me, It’s also been very fun but very busy!

Before joining DEVILOOF, you both took part in other various projects. How is this compared to your experiences in the past?

Kanta: I didn’t start in a visual kei band but rather in the metalcore scene where I partook in bands for about three to four years.

Do you feel a difference between the two music scenes?

Kanta: It’s totally different. As for visual kei, your face and appearance are much more important. It isn’t just about what you’re able to generate and create with your two hands or what you do with your instruments, but your whole appearance has a more significant role to play in a visual kei band.

How about you Aisaku, how is DEVILOOF different from your past bands?

Aisaku: I played in a death metal band before joining a visual kei band. And after that experience, I thought, “If I mixed death metal and visual kei, wouldn’t that be the greatest?”.

You composed music back then, right?

Aisaku: Yes, I did in my previous death metal band.

Keisuke: Really? I didn’t know about that [laugh].

Kanta: I actually didn’t know about that either.

Was it heavier music back then compared to DEVILOOF?

Aisaku: DEVILOOF is a lot harder than my previous band. Compared to DEVILOOF, that was pop. 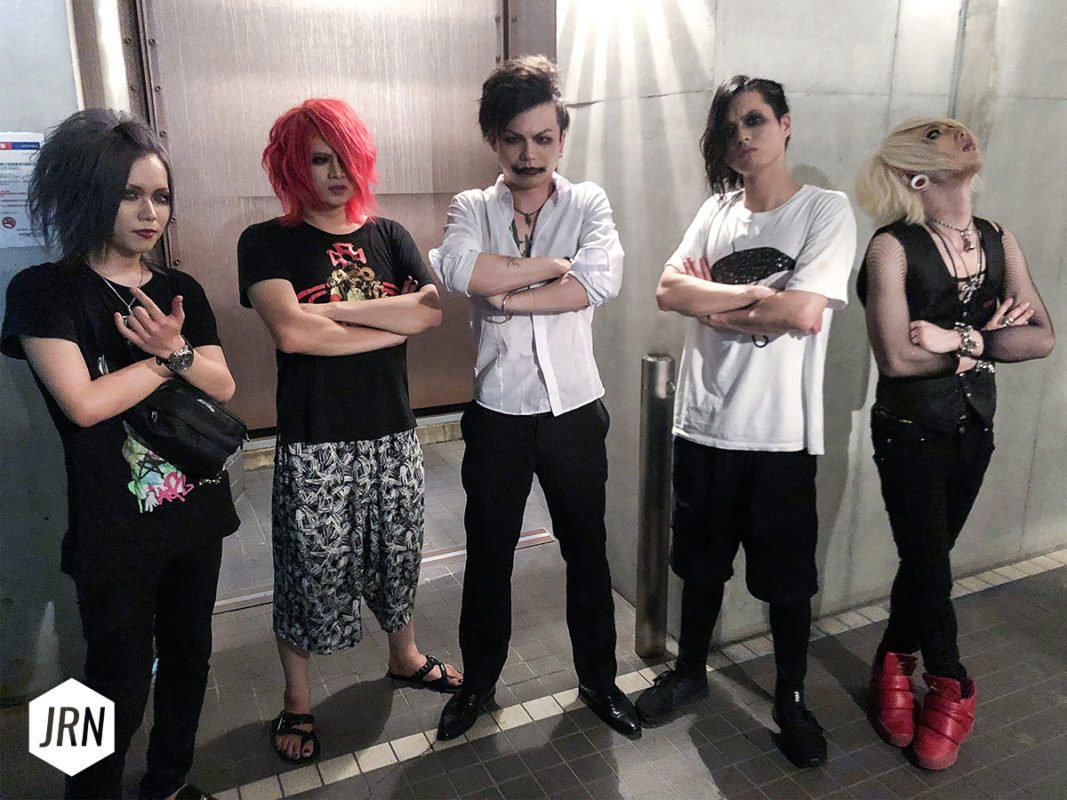 As DEVILOOF continues to grow, your spread around the globe has also increased. Have there been any results of global success that have surprised you?

Daiki: We perform in a really niche genre, the people who are into this kind of music are really into it, but the reactions and the recognition we got were more than I thought it would be.

We noticed that you watched the famous YouTuber Jared Dines’ react to your music video GOUZINZANGOKU. Ray even tweeted about it! What are your thoughts on it?

Ray: Other than happy, can’t really find any other words to describe it.

Daiki: Also, we received a lot of comments on our music video on YouTube from people who watched Jared Dines’ video, so we are very grateful.

With a heavy and brutal band like DEVILOOF, what kind of lyrics do you usually incorporate? What would be a typical theme?

Keisuke: Hm, it’s actually quite difficult to say, but the best way to describe it might be that the general theme is “splatter”.

Does it feel like music videos help to express the lyrics?

Kanta: Because it’s visual kei, it’s really important to get the image out rather than just a sound because that’s what the selling point is really, it’s much more valuable than lyrics video. 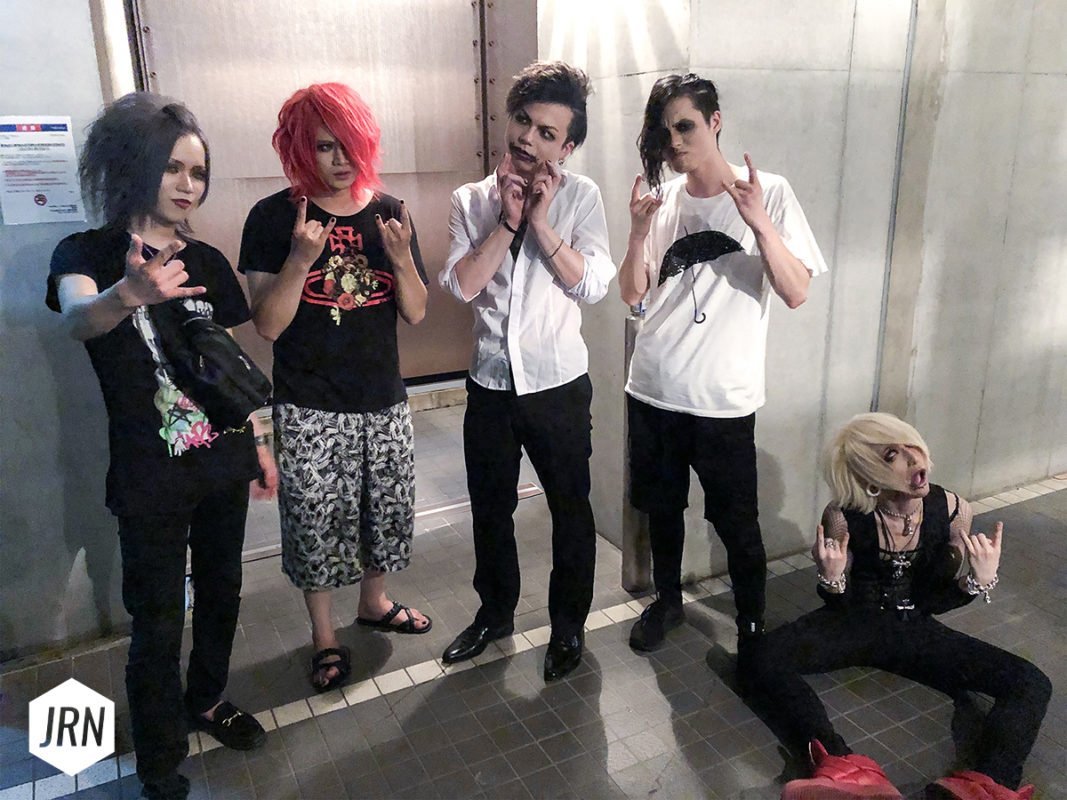 You’re planning on performing in Europe soon, this will be your first time performing overseas! Have there been any talks about performing in other continents already?

Kanta: We would like to go! [In English] I hope so!

Daiki: For example South America, and America. We want to go everywhere we could possibly go in the entire world.

Keisuke: Everyone, please help us to make this into a reality!

Was there any particular reason you wanted to start your expansion in Europe?

Daiki: As most people already know, Europe has a lot of places that are into metal, like Germany.

Have you guys been to Europe before?

Daiki, Keisuke: No, never. None of us have.

Ray: I haven’t even been outside of Japan.

What are you expecting from the crowd in Europe?

Keisuke: There are a lot of beautiful people in Europe. They have tall noses!

Daiki: Shows in Europe are pretty fucking crazy and energetic so I really can’t wait to perform there!

Ray: There were some foreigners who attended our shows in Tokyo and they always had a drink in hand and will mosh with a drink.

Kanta: I think that the people who go to shows in Europe are a lot more crazy and have a lot more energy than the people in Japan. I want to experience that in Europe. If we go and the crowd is just kind of dead, I’d be really sad.

That’s different from the typical visual kei show in Japan where furitsuke (choreographed movements) would otherwise guide the audience.

Ray: We don’t need that, furitsuke that is.

Kanta: More than being a Japanese thing, furitsuke doesn’t really exist in the metal scene but almost exclusively in visual kei, so it would be fine if there wasn’t any. As we’re going to put on a metal concert overseas, we want to experience a metal concert in return.

What’s your thought on this Aisaku?

Is there a future for DEVILOOF that you are working towards, or is the band’s progress simply a result of doing what you love?

Keisuke: [In English] Half-and-half. We really enjoy what we do but we want to become bigger.

Do you have a band that you look up to?

Any Japanese bands too perhaps?

DEVILOOF: That would be DIR EN GREY. Also, X-Japan.

Keisuke: It’s difficult to come up with them on the spot, but as for foreign bands, there are a lot!

Maybe you could join them on Knotfest Japan 2020 (a festival hosted by Slipknot)?

Has Ryo influenced your work drastically? If so, in what way?

Keisuke: Well, no, not really.

Daiki: As Keisuke mentioned, no real influence in particular. It’s not so much that Ryo influences our work but he has given us advice about being a band. For example, previously, he’s given us advice about our music, although, at this stage, not really. But from here on out regarding our future direction he may be more deeply involved.

What kind of significant advice has Ryo given?

Daiki: He simply said, “Just do what you want to”.

DEVILOOF has broadcast a few performances via Facebook, are there plans to do more in the future? Conversely, would there be plans to upload pre-recorded live sessions or even studio sessions? Fans overseas would surely appreciate it!

Kanta: We would like to do more of this, but we need to improve the quality of recordings before we put it out. For example, properly installing microphones to capture great audio.

What was your best concert experience as an audience member?

Daiki: Dream Theater, Kamelot, GALNERYUS, and Lamb of God too.

Aisaku: Jason Richardson from All That Remains, formerly in Chelsea Grin. And also Polyphia.

Ray: I don’t really go to concerts. I don’t want to go out. I prefer playing Monster Hunter.

With that, what are your hobbies?

Daiki: Watching baseball games and… Actually, for the most part, I can barely remember my hobbies as I spend most of my time working with music.

Kanta: I basically only have drums in my life. It’s thanks to drums that I’m able to stay alive.

Keisuke: Yes, he really is a drum junkie!

Do you have a message for the JROCK NEWS readers?

Daiki: Please keep listening to our music. Share it with your friends who like heavy music. We are aiming to go overseas as soon as possible, so I hope you’re looking forward to it as much as we are!

As always, we really appreciate DEVILOOF for taking their precious time to speak with us. We also want to thank V STAR PROMOTION for making this possible.