The original visual kei anime “Visual Prison” announced back in March has received its first preview, giving us a look into what can be expected from it. Produced by Aniplex and their studio A1 Pictures, Visual Prison will start airing this October and has Noriyasu Agematsu, of the unit Elements Garden, credited as the creator and music producer.

Noriyasu Agematsu is well known for his work in the multi-media franchise “BanG Dream!” and has composed music for their gothic band, Roselia. His work can also be heard in the music anime Symphogear and in the comedy vampire anime Rosario+Vampire, among many other.

The anime Visual Prison revolves around vampire visual kei musicians who gather in Harajuku, Tokyo, under the “Crimson Moon” annual event called Visual Prison. Towards the display of the vampire banquet, the vampires’ abilities are heightened, and they open the barrier for those called the Princes.

The musicians bring their most beautiful songs to the stage in order to captive the audience and use these songs as offerings to the Crimson Moon. The ones who succeed in charming the Crimson Moon are awarded ultimate power.

Ange Yuki is a young boy who doesn’t feel connected to his home environment and carries a strong feeling of loneliness within him.

Taking advantage of having no relatives left, he leaves his hometown and when he visits Harajuku where all the artists he looks up to perform, he stumbles upon a concert battle between the visual kei unit “ECLIPSE” and “LOS†EDEN”.

While he is overwhelmed with their energetic stage performances, a sudden violent pain strikes Ange…

In the first promotional video, we get to hear a snippet of the song Guilty Cross (ギルティ†クロス) by ECLIPSE—now available on iTunes—one of the three main fictional bands the story follows. The other two include LOS†EDEN and the protagonist’s band, O★Z.

You can get a feel for each band through the fantastic official illustrations created by Katagiri Ikumi. Each member also has their country of origin specified in their profile, a detail that plays well into the visual kei concept. 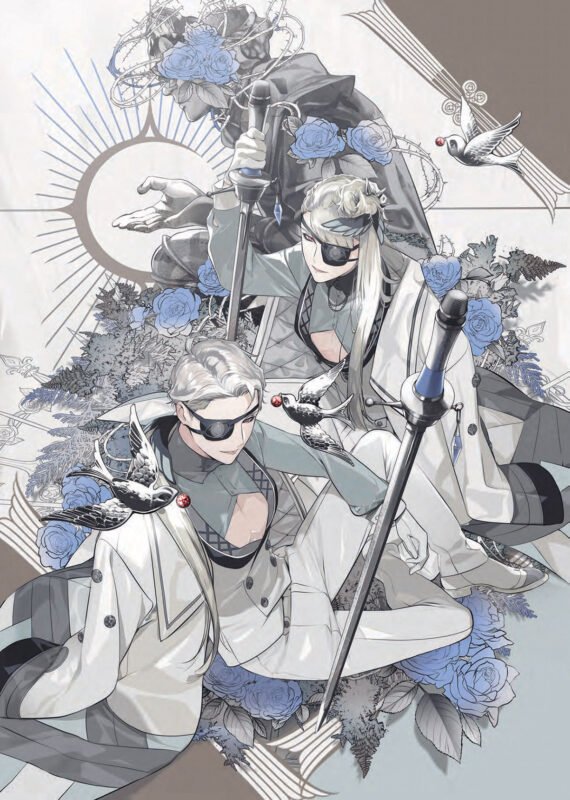 More original music will be released from the series, so make sure to come back for more as the anime progresses.