Get the year started with an electric bang on January 29, when LOVEBITES release their third full album Electric Pentagram. It delivers 12 electrifying tracks of guitar shredding, face-melting power metal. Also, it drops at a great time between their upcoming Japan tour and recently as special guests on the DragonForce UK tour. Notably, an excellent pairing as both bands similarly infuse themes of fantasy and classic heavy metal into their music. More so, what may have been most surprising to concert-goers is that LOVEBITES is an all-female Japanese band. They showcased an incredible ability to keep up with the boys and that performance and capability are present on album Electric Pentagram. 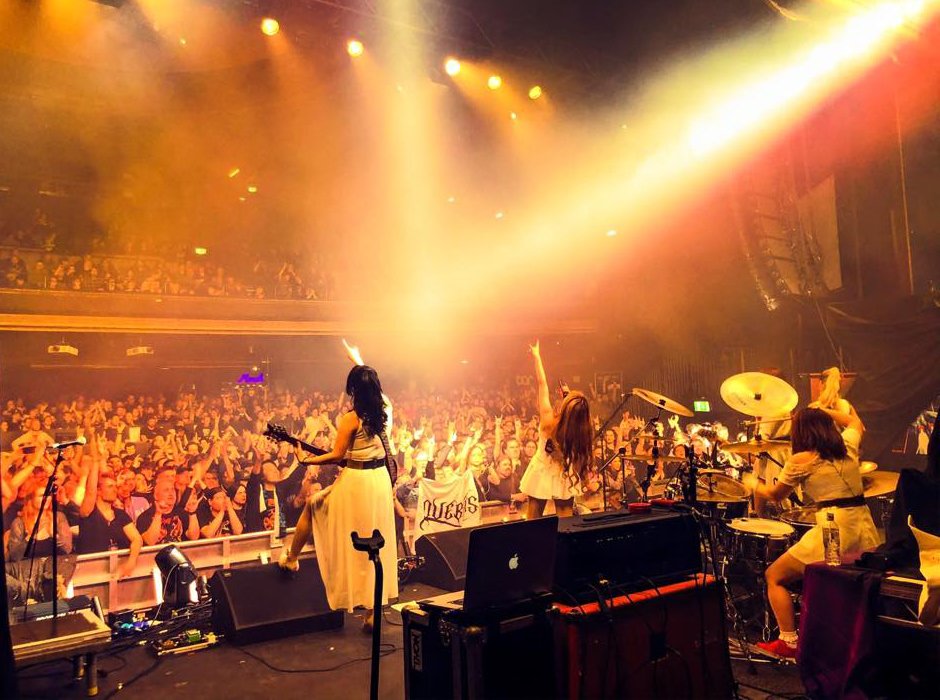 LOVEBITES performing in London as special guests for DragonForce

Moreover, they must have learned from the forefathers of metal to go on the attack and stay on the attack. Because influence from Iron Maiden, Judas Priest, and Manowar drive their hard pounding beats and fast tempo. For instance, on the opening song Thunder Vengeance its stormy intro sound effect sets the stage for a guitar showdown. While Asami, the lead vocalist, belts out the lyrics in rapid succession, a drum and guitar battle wages behind her. That energy carries into Holy War with its solid melody and symphonic backing and on to penultimate The Unbroken, a sweeping and uplifting speed ballad with gratifying harmony. Lastly, Swan Song holding considerable power until the very end with an orchestral hymn and piano outro.

To be sure, a well-produced album with every instrument turned up to 11 but there is little, if any, a hint of excessive compression in the mix; whereon all songs one can hear every hit of the crash cymbal, every hum of the bass notes, and each crescendo of the orchestral synth. In particular, the epic When Destinies Align delivers fast and heavy riffs that could be inspired by some epic historical war. Likewise seen in the video below (currently unavailable in some regions) where the ladies are armored up like samurai warriors. As if to charge forth with the battle cry, “Carry on!”.

At one point during the review, a fitting headline could have been borrowed from the 1980’s NES slogan, “Now your playing with power”. From start to end, each song is an exemplary variant of “power” metal. While that may be exactly what a power metal fan wants, it does not leave much room for anything else. With the amount of talent these musicians possess, they seem to have a comfort zone that they stick to. There is some lack of experimentation or an attempt to utilize different styles.

Even the very beautiful ballad that comes close to slowing down the tempo, A Frozen Serenade, is quite the hard charger. Unlike on prior albums where Epilogue, and Edge of the World brought in some breathing room for a slower pace. At times, it is difficult to find the emotion in all the sound and fury.

Despite that, there is stellar professionalism from very talented musicians. As the bandleader, Miho provides a steady hand of guidance and holds down bass lines throughout with tenacity. Haruna on drums is superb and provides well-timed fills. While guitarists Midori and Miyako complement and challenge each other to bend those guitar strings and amp up the power chords. Also, Miyako performing on the backing keyboard for much of the album.

All things considered, something for classic rock fans and even metalcore enthusiasts can be appreciated here. Just one search of “LOVEBITES reaction” on YouTube returns an increasing array of influencers blown away by their musicality. But when every song sounds like an encore, there is not much separation from the highs and lows. Yet this is a small complaint about LOVEBITES as they build on their legacy after Awakening from Abyss and Clockwork Immortality. By all means, get a jolt of metal goodness as now they are playing with power.