Before NEMOPHILA took the stage at Whisky a Go Go on July 1, we had a sit-down chat with them. In person, their candidness and sweet personalities were charming and disarming. So, we had to find out how these innocent ladies transform into rock queens from hell on stage!

Join us for an exclusive interview in this final part of our coverage of NEMOPHILA at Whisky a Go Go.

Thank you so much for giving us the time to interview you. We are very excited that you are here in Hollywood. For the members who are visiting for the first time, what do you think of America so far?

Hazuki: In Japan, we still have to wear face masks, almost 100%. When we came here, it was so open and free, that I was relieved.

And yet, SAKI has been to America before, do you notice any difference since the last time you were here?

SAKI: The last time I was in the United States was in Texas. I noticed this time that California has a different inspiration and impression.

Well, here is some impressive news for your arrival in America. We have been informed that you have sold-out Whisky a Go Go. Congratulations on having a sold-out show for tomorrow night.

Having a sold-out show here in America is following up on your success from touring in Japan. And that was the ZEPP tour where you performed with bands like Loudness, PassCode, and ROTTENGRAFTY. What was that experience like after performing with those bands and now coming to America?

mayu: During and after the ZEPP tour we felt we got more groove and also we learned staging and eye contact with audiences, as well as between us. After we learned those things, we felt more confident. And then, while we were traveling to the United States, we got to spend time together. I felt like we were getting much closer and we can perform as one. So, it’s going to be much, much more energetic and more of us to the audience.

Wonderful to have time together as a band, but what do your friends and family think about you coming to America? What did they say?

Tamu: My mother is a big music fan. When she heard the name of the place, Whisky a Go Go, she was so excited for us.

Haraguchisan: My father told me, to go and get it! Destroy the US! 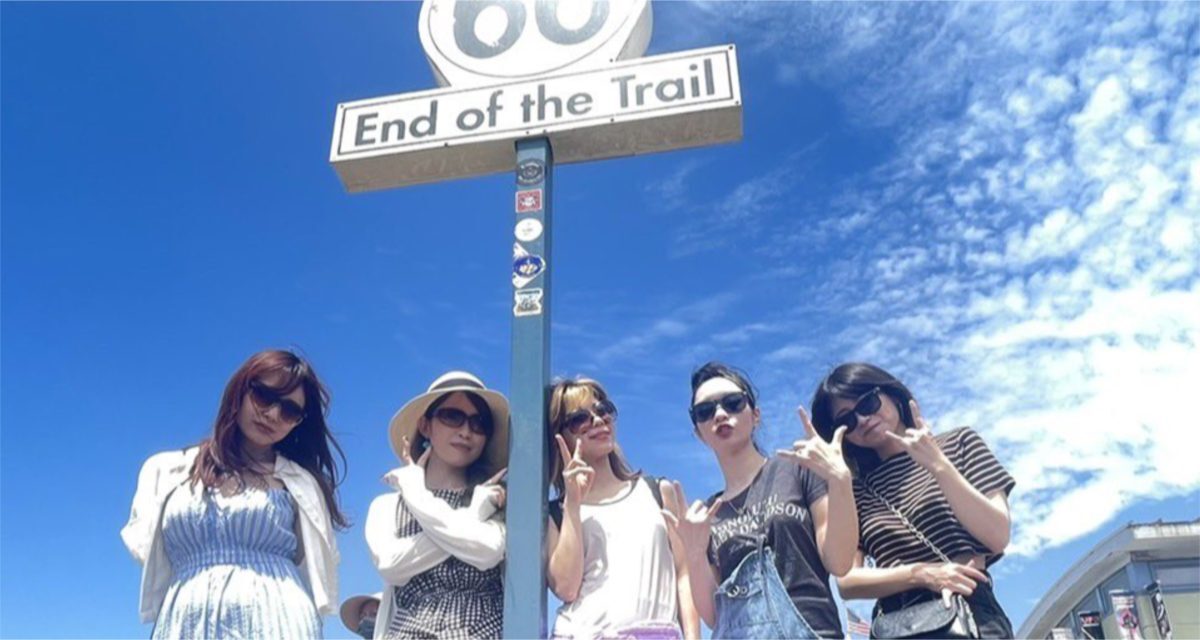 The end of Route 66, is the beginning for NEMOPHILA in America!

Before you left Japan, we noticed you were recently on NHK World’s Songs of Tokyo. They spotlighted your band as a powerhouse of a girls group in Japan. What does that honor feel like?

mayu: We are very glad that we came to this position and we are excited. But at the same time, I’m still kind of surprised myself.

Obviously, the power is in your music, like in the song ADABANA. As we understand the translation, it is about a flower and yet the name of your band is also a reference to a flower. Is there more going on here with the use of flowers?

SAKI: As a band, we have a thing for sharing with people through lyrics. When I was writing the lyrics of ADABANA, I thought of writing a lyric with a metaphor of a flower, because we have our name based on a flower.

Even more, when we started NEMOPHILA, we were thinking about the name of our band, and we searched for topics that could evoke our feelings. Because we are girls, and flowers are a very girly image, we picked out the nemophila flower. And when we wrote the word “nemophila” in the uppercase English alphabet it looked so metal!

It gave us metal feelings, so we went with that flower name as the band name, NEMOPHILA. But we don’t always think of it so seriously [laughs]. Sometimes we pick something like a flower and other things like we did for ADABANA.

Makes sense, it’s a good combination of imagery. That imagery can be found on the new re-release of REVIVE, which has eleven remastered songs. It also has six songs with new English vocals. Any reason you chose those for English vocals?

mayu: This time, for those remixes, we choose those six songs where we changed the lyrics into English so that the lyrics can feel and sound better.

It’s amazing! And in the past, you had to work hard to be able to sing English lyrics. Now that you have been doing it more, do you feel better about singing songs in English?

mayu: It’s still difficult. Even though I have more opportunities to sing in English, the more I sing it, the more it becomes difficult because I want to make it better. I want to sing it better! So I will work even harder.

I understand. It’s such a big gap between Japanese and English meanings.

mayu: And also, the sound of English is different from the sound in Japanese with lyrics. It becomes different notes on different strengths and lengths. It’s even more difficult as I learn more!

Well, you are doing very well so far. Good job!

Another question regarding REVIVE. About the song HYPNOSIS, is that song inspired by a certain Disney film?

Haraguchisan: [Smiling] Yes, Aladdin. HYPNOSIS is a song I composed. I really liked the movie, the sounds in the film were very exotic and mysterious. It had characteristics that if we play this on a stage, it’s going to be so cool!

It’s very cool. And speaking of great moments on stage, from the January 9 performance at LINE CUBE SHIBUYA, mayu seemed to have a moment where she experienced powerful emotions. Would you share with us what you were feeling during the performance of Life?

mayu: That performance in Shibuya, was the first time the five of us were together after the COVID pandemic started and it was two and half years after our formation. And finally, finally, we made it to a live performance with an audience.

So that alone was already too much emotion for everybody, especially for me. But when we opened the show with big silhouettes of us projected on a curtain in front of the stage and as this screen would come down, we thought we are going to make a big impression on the audience. But, when it was down, I was so impressed by the fact that the audience was in front of me, and we were really doing this live on a big stage.

We were totally emotional in that live performance. And after all, even though there were restrictions that the crowd could not say a word due to masks and social distancing, I thought I could hear their voices from the stage.

And for us, watching that performance online, we were moved and happy for you. Yet, other members have had unique experiences too, even before the pandemic. For you, Hazuki, your experience before now, how has that prepared you for this tour?

Hazuki: Before NEMOPHILA I was in other bands, but I was very new to this. Everything was so unknown, and I learned a lot from Li-sa-X Band. Now, I can use those experiences, for example, how to perform in front of an audience and communication with them.

Very cool. And other members on their learning experience, Haraguchi-san, how did you become a bass player?

Haraguchi-san: Basically, I love the low, low frequency, and strong sounds of music. I was in the marching band in junior high school and played the baritone saxophone, which is larger compared to the alto sax. The baritone has more melodic rhythms. Then in high school, I wanted to play guitar, but when I saw the bass being played in a band, it was amazing. I wanted to do that too!

Every time we see you in videos and on stage, you look like you are having so much fun! And another member having fun: Tamu, everyone who sees you play is so impressed, they say, “she’s ferocious, amazing”. How did you get that level of experience?

Good way of taking out aggression! And finally, you’ll be coming back to America later this year for the Aftershock Festival. What messages do you have for your fans until October?

Hazuki: To all the fans who like NEMOPHILA in America: let’s scream, drink, get loud, and have a blast! We’ll do our best to put on a great show!

mayu: We are here to kick your ass!

Haraguchi-san: Hey LA! We came here just to tear it up and then go home! Let’s do it!

Tamu: Hi! I hope to meet you all someday. I’ll give it all I’ve got!

SAKI: Hi guys, thank you for supporting us. Your support brought us here to the US. Thank you so much and we would like to do a US tour, of course. So, see you all someday soon.

After the performance at Whisky a Go Go, NEMOPHILA continues to deliver new music. Check out this funky metal fusion as mayu raps for STYLE!

JROCK NEWS thanks JPU Records for making this interview possible. 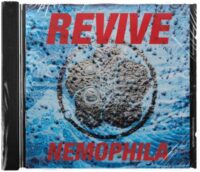