One of the hotly anticipated releases this year is BABYMETAL’s METAL GALAXY. An album standing on familiar ground while doubling down on their brand of “kawaii metal” that also finds inspiration from around the world. Subsequently, ever since the departure of Yuimetal, fans have been wondering—how do they move on without Yui? No doubt a challenge to replace a shining star in the leading trio. So far on the world tour, her position is handled by a rotation of backup dancers, known as the Avengers. And with this new album, BABYMETAL is calling for an assist from renowned global musicians. That is to say, this album features Tak Matsumoto from the B’z, Joakim Brodén from Sabaton, Thai rap star F.HERO, Tim Henson and Scott LePage of Polyphia, and Alissa White-Gluz from Arch Enemy. Apparently, Yui left a big pair of shoes that need to be filled.

As always, Su-metal and Moametal push themselves incredibly on vocals. They deliver a gravitas performance that demonstrates the confidence needed to lead a rock band. Taking guidance from producer Key Kobayashi (aka “Kobametal”) and the songwriters. In the same vein, the virtuoso talents of the Kami Band set the foundation of this powerhouse. Adding their abilities and immense range in bringing the music to life. A talent very familiar for the veteran guitar hero Tak Matsumoto, as he jams with the band in DA DA DANCE. Taking inspiration from Lady Gaga, this modernized Eurobeat injects a dose of metal into uptempo dance-pop. Though the end result may be an aerobic exercise song, it is still BABYMETAL ear candy.

Most importantly, METAL GALAXY keeps what has worked for them and solidifies the catchy hooks with driving beats. For example, Distortion kicks off a heavy metal opera. The rhythm rapidly marches across an audio landscape accompanied by machine-gun percussion. In addition, Alissa White-Gluz amps up the intensity with harsh vocals added for the album mix. Likewise, the majestic Starlight provides punch and crunch on a power ballad. It slowly builds up to an explosive mix of harmonic vocals and heavy guitar presence. As reviewed before, a subtropical fruit is all the more tasty in PA PA YA!! and Elevator Girl strikes hard adding dance beats with shredding guitar riffs. 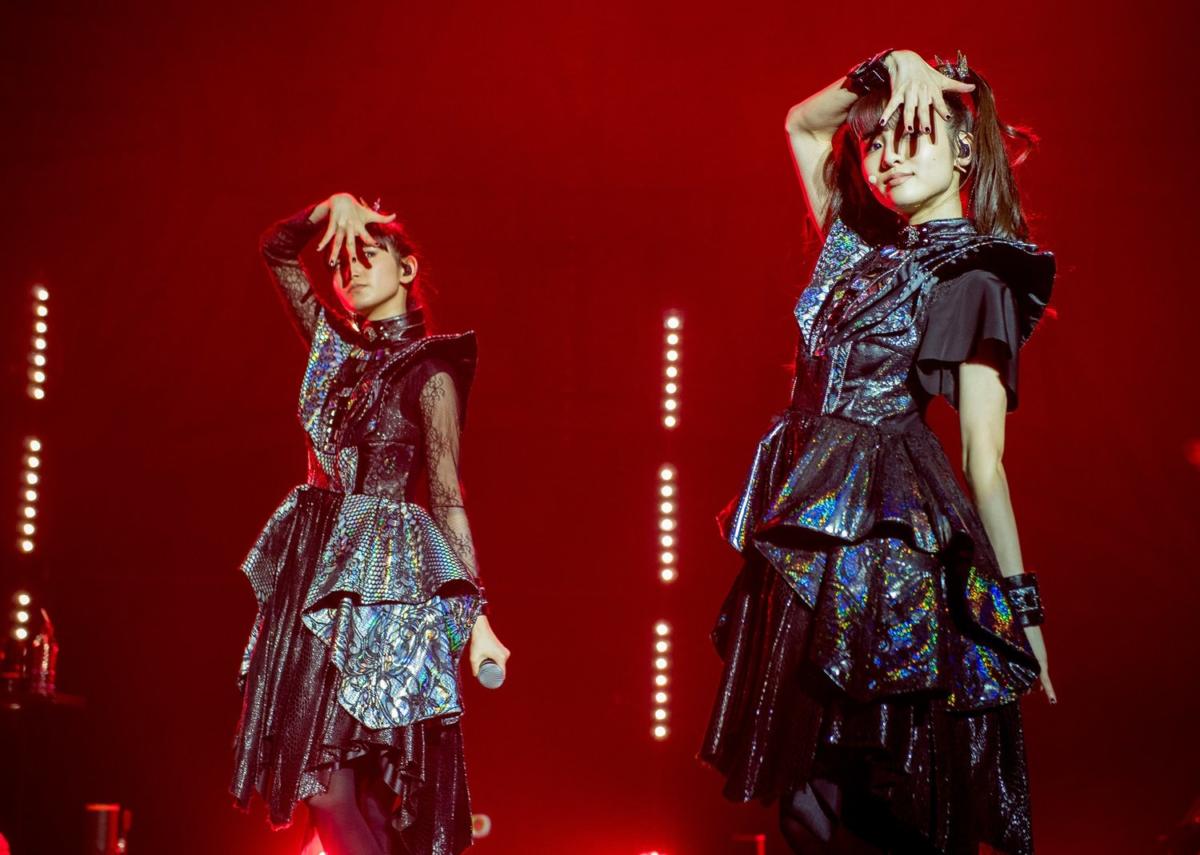 Then there is the worldly influence that weaves through the album. Interestingly, the traditional music of India serves as inspiration for Shanti Shanti Shanti, a word which means “peace”. It may not win over metal purists, but the blend of genres is core to their style while also being experimental. And then they seem to celebrate a great victory with Joakim in the polka inspired Oh! MAJINAI. If the Fox god and Norse gods threw a grand ball, then this would play in the dance hall! In contrast, Brand New Day veers into the progressive rock arena with Tim and Scott involved. In a number that strips away the heavy metal, but is still enjoyable for those who accept a softer touch. On the other hand, Night Night Burn! adds Spanish guitar and bongos in search of a salsa sound, but comes up short in merging mambo with metal.

Ultimately, the album closes with Su’s mighty vocals on the hard rock ballad Shine. It may draw comparisons to The One from the self-titled first album, but stands on its own as a symphonic lullaby. In essence, Starlight, Shine, and Arkadia form a meta song concept as a theme for some dreamy galactic journey. While Arkadia reaches for the same show finale that Road of Resistance achieved previously. Above all, this release exceeds beyond their previous album, Metal Resistance, with more officially released singles and less formula. In the end, with a diverse sound and worldly inspiration, it invites anyone to their universe.

However, the problem with BABYMETAL is they demand to be seen as well as heard. Which may be possible while they are on a world tour as North America wraps up and then Europe in 2020. Better still, listeners can take this album as one half of that equation. And while it is in vogue to have intro songs—FUTURE METAL and IN THE NAME OF try to, but fall short for setting expectations. Yet do properly lead-in for a unique track order. Almost retro these days with the randomness of streaming music. Speaking of retro, there are also vinyl editions available. And about the editions, the international version has two fewer songs. Whichever one though, put this on play and take a journey across a METAL GALAXY.