Update 2022-4-3: Due to the vast majority of shows selling out, BAND-MAID has added two more.

Original Report: The BAND-MAID US TOUR 2022 is conquering American box offices, selling out in five out of eleven cities across the country.

According to Live Nation, ticket sales starting on March 3 sold out on the very same day in Boston, New York, and San Francisco. Indeed due to that overwhelming demand, organizers quickly moved the Boston show from Brighton Music Hall to the Paradise Rock Club which has room for 900 plus attendees. As of this report, Phoenix and Seattle have now also sold out. Some tickets are becoming available again, but as “verified resale” at higher prices.

While the maid-clad rock band from Tokyo has entertained audiences worldwide since 2015, their popularity was noteworthy on their last overseas tour in 2019. That tour was a total sellout at venues in New York, Dallas, and two shows in Los Angeles.

Even now, their star power grows from an appearance in the Netflix film Kate and having chats with famous rock stars such as Yoshiki of X Japan. Looking ahead this year, their US tour kicks off on October 9 at the Aftershock Festival in Sacramento, CA where BAND-MAID will perform along with Japanese bands Crossfaith and NEMOPHILA. 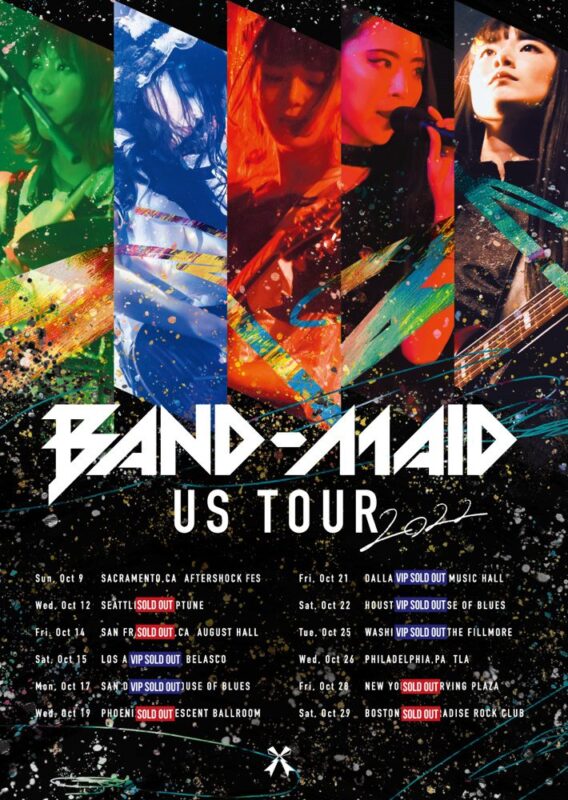 Fast sales could be a sign that a pandemic-weary public is ready to get out again. Lately, cities and states are relaxing on lockdowns and mandates while many venues institute safe attendance standards with a “health check” policy.

Additionally, other artists are leading the way in a return to normalcy for Jrock, like “guitar samurai” MIYAVI who stormed across North America in his 2021 tour. Previously too, we reported on new tour dates from SCANDAL on their “MIRROR” WORLD TOUR 2022. Check our tour pages for North America and Europe while we eagerly await Jrock artists to venture out of Japan and visit us soon!