LiSA released her new song Yuke through digital platforms on October 15 with an accompanying music video. The music is composed by producer Ayase from the duo YOASOBI while the lyrics are written by LiSA. The song is featured as the main theme in the upcoming anime film “Sword Art Online Progressive: Aria of a Starless Night“.

See LiSA in the music video Yuke where she is placed in a dark facility while exhibiting a wistful yet strong emotional performance.

Theme song Yuke marks LiSA’s return to the Sword Art Online franchise since 2019, where her single Unlasting was featured in its third season “Alicization – War of Underworld”. LiSA had previously performed several songs for all three seasons of the series and its first animated film.

The upcoming anime “Sword Art Online Progressive: Aria of a Starless Night” is the franchise’s second movie and premieres in Japan on October 30. It is based on the first volume from the spin-off light novels titled “Sword Art Online: Progressive”. This is an expanded retelling of the original storyline which focuses on the clearing of each of the 100 floors in the world of Aincrad. The film covers the events that take place on Aincrad‘s first floor and Asuna’s initial struggles inside the virtual reality world. 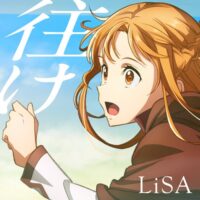