DEVILOOF just put out their single NEWSPEAK on April 23 paired with its war-themed music video. The band’s newest creation introduces a fusion between traditional Japanese sounds and subtle electronic effects into their violent metal.

The intense three-minute piece starts with fast-paced instrumentals and a showcase of vocalist Keisuke’s extensive vocal range and techniques, going from low gutturals to high-pitched squeals. The frenzy makes a quick stop with a surprising intermission delivered by Japanese percussion instruments and a shinobue (Japanese traditional transverse flute made of bamboo). The band finishes the track with a final breakdown and more gutturals from Keisuke’s blood-covered mouth.

We can also appreciate a mix of tradition and contemporary themes in the imagery of the video. Most notably, in the intermission, where a woman with a Noh mask appears in front of the traditional musicians to then being executed. This leads into a portion of the video where various nuclear warfare clips are shown, those that took place during World War II in Japan. 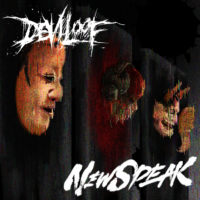