If you were a regular attendee of live music events, following streamed concerts may have become your new routine in this lockdown world. The live music industry finds itself at the forefront of embracing online technologies as it tries to navigate its way back into a regular routine. Streaming performances in pre-recorded or live as-it-happens form has been popping up everywhere these past few months and is growing rapidly. Considering this was already a topic of discussion pre-pandemic, the narrative of the conversation is no longer “when and if” this change will happen, but “is this the new normal, and is it here to stay?”. Well, JROCK NEWS has already discussed the world of livestreamed events, so the only thing left for us to do was to experience this growing trend for ourselves.

With an electronic ticket ready at a click of a finger, we entered the virtual world of Zepp Tokyo venue for tonight’s MAN WITH A MISSON 10th-anniversary celebration performance. The pre-recorded event MAN WITH A “REBOOT LIVE & STREAMING” MISSION commenced on August 24—25 but tonight’s calendar shows August 29. This meant the livestream was ready and waiting for us as soon as the starting time came around. So let’s go! 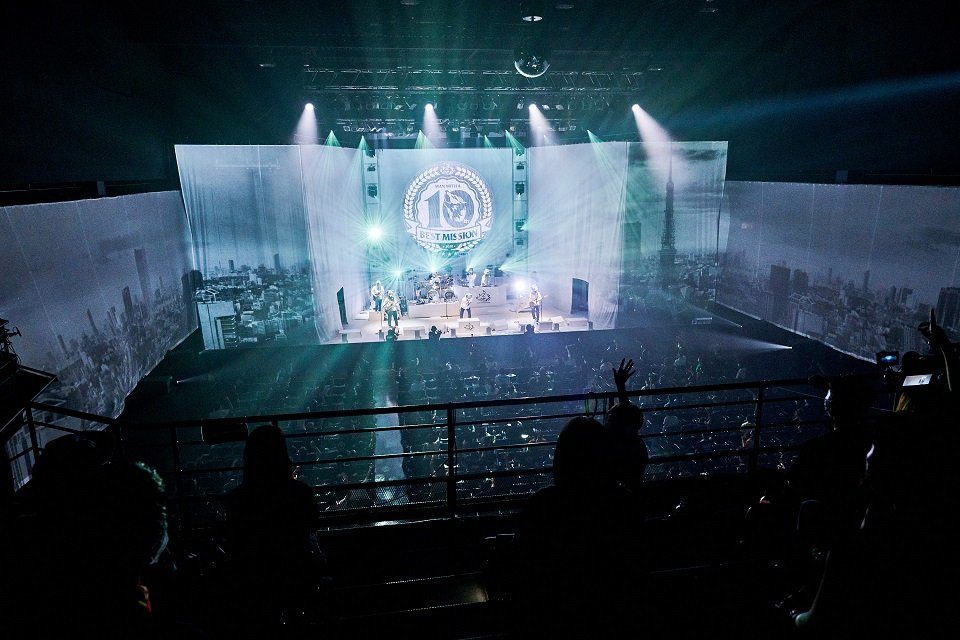 The scene is set with a 180-degree screen that stretches from floor to ceiling, across the full stage, and encompassing the crowd around the sides— filling our screens from side to side. The audience is presented with a taste of what tonight’s staging and light show has in store for them with the opening song, Change the World, taken from the MAN WITH A “BEST” MISSION album released in July. We are offered an array of colors emanating from the LED displays, of horizons and night skies, as the band sings a song of “freedom” and “finding the key to your life”—and if you were to be overcome by the pandemic dysphoria, this would be the moment it would take hold. This song’s impact might have been heightened seeing as this show was our first livestream. We found ourselves floating in the realization that we were finally experiencing live music once again, but not how we imagined it. 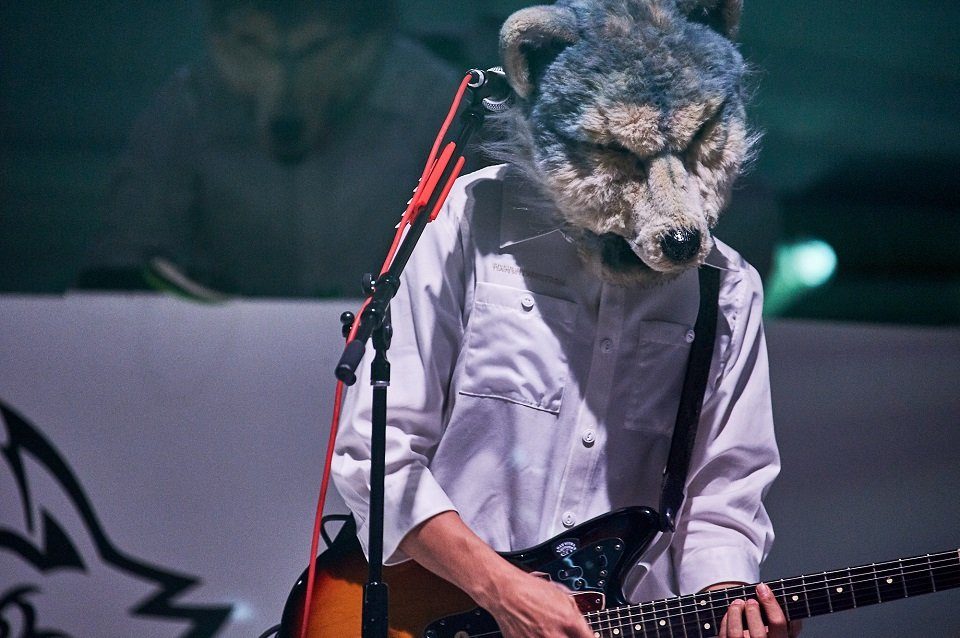 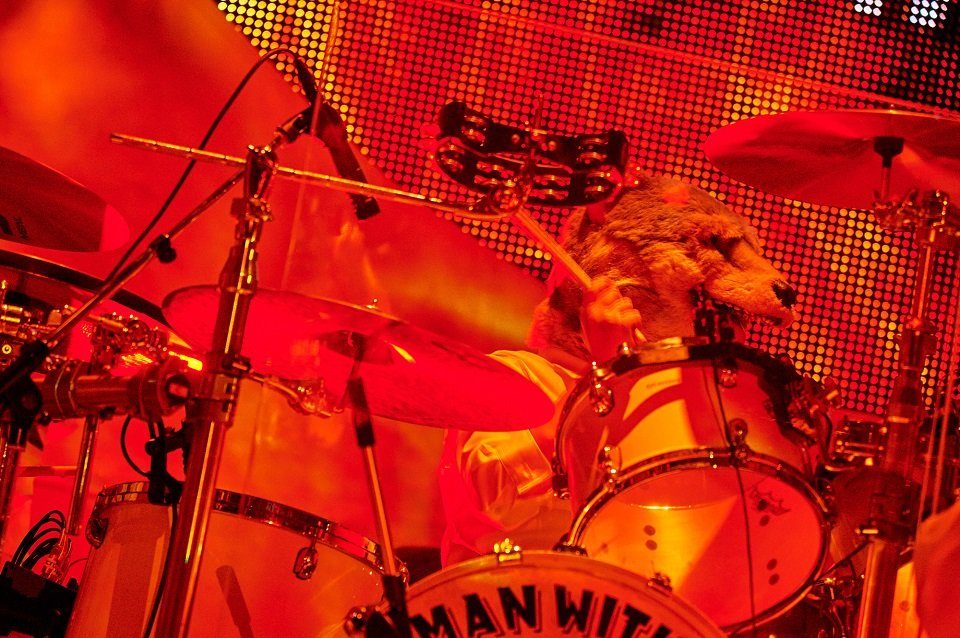 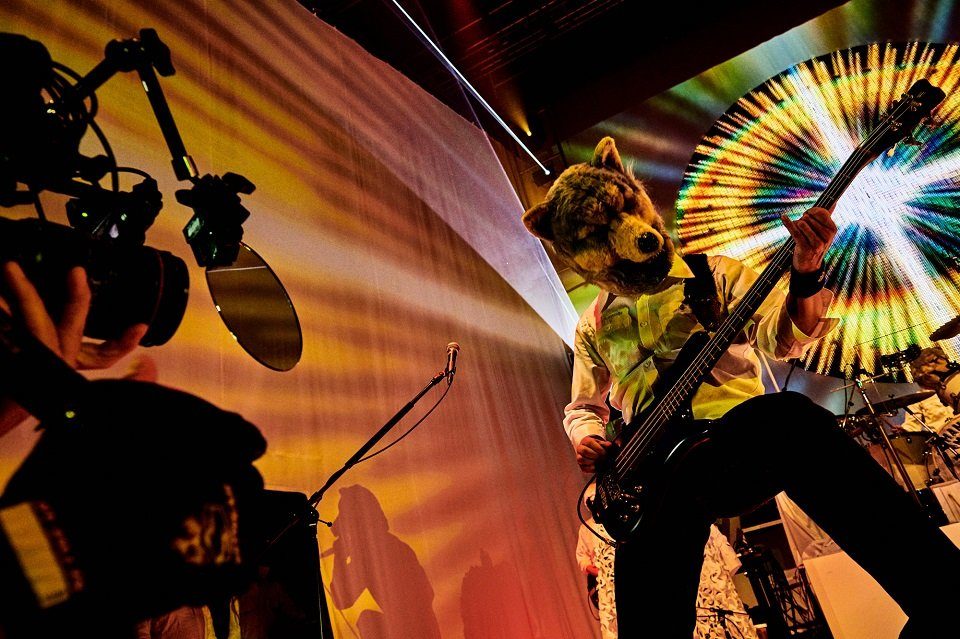 As the light show continues, a heavenly glow across the venue gives us full venue shots of the crowd. Tonight’s lucky crowd of 300 selected attendees filled only 15% of Zepp Tokyo’s usual capacity, and masks were mandatory to facilitate social distancing. Vocal cheering was also off-limits, but that didn’t stop the crowd’s enthusiastic fist-pumping and jumping in response to the band.

Only the third song in with Raise your flag and viewers have already experienced half of the color wheel as we are greeted by a burning inferno as the stage is engulfed in a vicious crimson flame light show. This song heats up the atmosphere and we experience the high quality of camera workmanship as they capture the heat of the song with quick cuts between views and fast-paced pans across stage and crowd. In an effort to give the livestream audience an impactful show, cameras are utilized to the max. Capturing every angle; front, behind, on top, inside, and besides, you’re amongst the members one moment and then floating above the crowd. The on-stage camera views so up-close to the band as they perform that you feel like the sixth member of the band. There’s no holding back and this performance is going above-and-beyond any other live performance editing we’ve experienced on screen.

This fast-paced high-energy follows them through the next few songs, TAKE ME HOME, super stomper— a cover song taken from the April release of MAN WITH A “B-SIDES & COVERS” MISSION— and Dark Crow. It’s in these songs that you start fully embracing the atmosphere of the performance and reflecting the same energy as the attending crowd. To give us all a quick breather, a drum and DJ solo took center stage before the whole venue became shrouded in darkness. Appearing across the stage screen, hundreds of fan videos formed a montage giving words of encouragement and thanks to the band. A couple of weeks prior to the performance, MAN WITH A MISSON called upon fans worldwide to submit their comment videos for a chance to be shown at this very live and join them in spirit even if physical presence wasn’t possible. 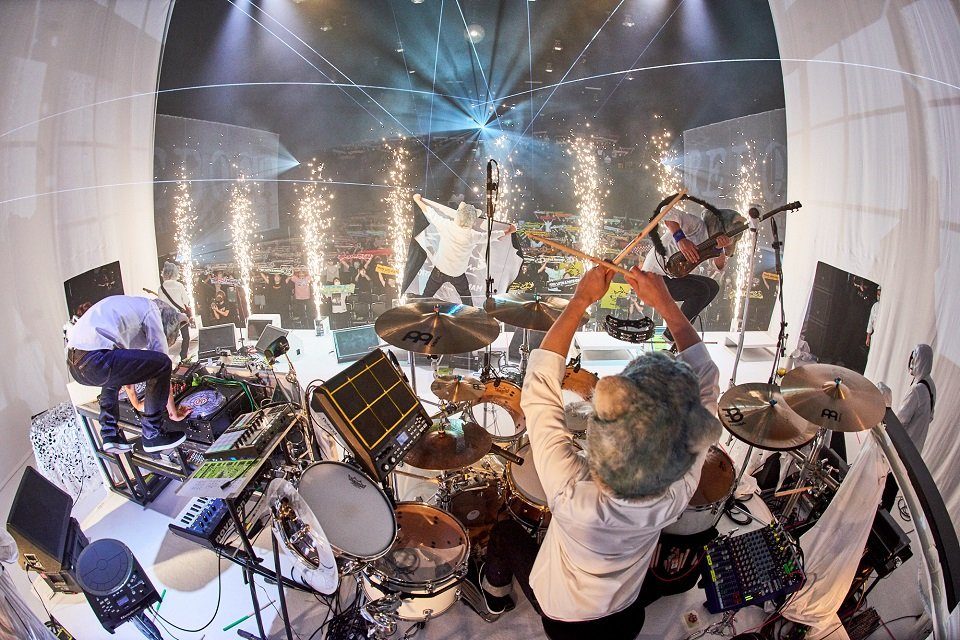 After the slower-paced and beautiful acoustic performance of Akatsuki, the full band joined on the stage once again to bring back some static energy with the next few songs of the set— one of which had not been performed live before, Ano kane wo narasunowa anata. The band kept us all on our toes with a ferocious, no-time-to-stop medley of the songs Emotions, Take What U Want, and Get Off of My Way. The live continued at this neck-breaking pace, with our heartbeat rate as high as if we were jumping in the crowd ourselves. The trippy graphics for Rock Kingdom was a personal highlight of the show, and a definite ‘you had to be there to understand’ moment.

The continual blitz of high-energy songs and attention-grabbing stage lights allowed no time for your focus to ponder on how different livestream feels to the real experience but instead encourages you to fixate on the new and fun experiences you are having instead. Even the camera focus gave the ethereal effect of watching wolf demigods with the view not straying below the top half of the band member’s masks. These guys surely were not human tonight.

With just about enough time to wipe our sweaty palms and refill our drinks before the encore performance, stream viewers were surprised with a new release announcement of three-month consecutive singles from October to December 2020 with further release details to come soon. Signing off tonight’s performance was an appropriate song of hope, Fly Again -Hero’s Anthem-.