As summer comes to an end, the BanG Dream! franchise celebrates with Special Live ~Summerly Tone♪~. A top-level showing of their bands with everything from water cannons and fireworks down to pyrotechnics. A spectacle to behold!

The performers for the night included: Morfonica, the latest entry to BanG Dream!; Ami Maeshima (as Aya Maruyama from Pastel＊Palettes) supported by RAISE A SUILEN; capping off the night was Poppin’Party.

Luckily, you too will have a chance to experience something similar to what we did later this month when Bang Dream! streams its concert to a worldwide audience. Find out more about that here, but in the meantime, here’s our report from “DAY3” of the BanG Dream! 8th☆LIVE.

Let’s kick this off with the venue, Fuji-Q Highland Conifer Forest. This puts the outdoor amphitheater at walking distance from Japan’s Fuji-Q Highland amusement park. Although the day itself was a little bit overcast it was quite scenic. The stage was tucked into a forest with massively beautiful mountains surrounding the horizon. The stage however, was nothing to downplay. It included some beautiful decorations for the event along with three large monitors that were used as backdrops throughout the performances. To the sides there were cannons that would occasionally douse the audience in water. Even though it was an outdoor venue, there were still fog machines aplenty.

Because of the pandemic, proper standard operating procedures were also in place to combat the spread of the coronavirus, while also making the fans feel safer. There was no cheering and only clapping, hand sanitizer at every corner, and spaced seating. Even the merchandise area was located far off-site with ample space to promote social distancing.

Altogether, it was still a fantastic environment! With that, let’s get into the opening act, Morfonica and its live debut. 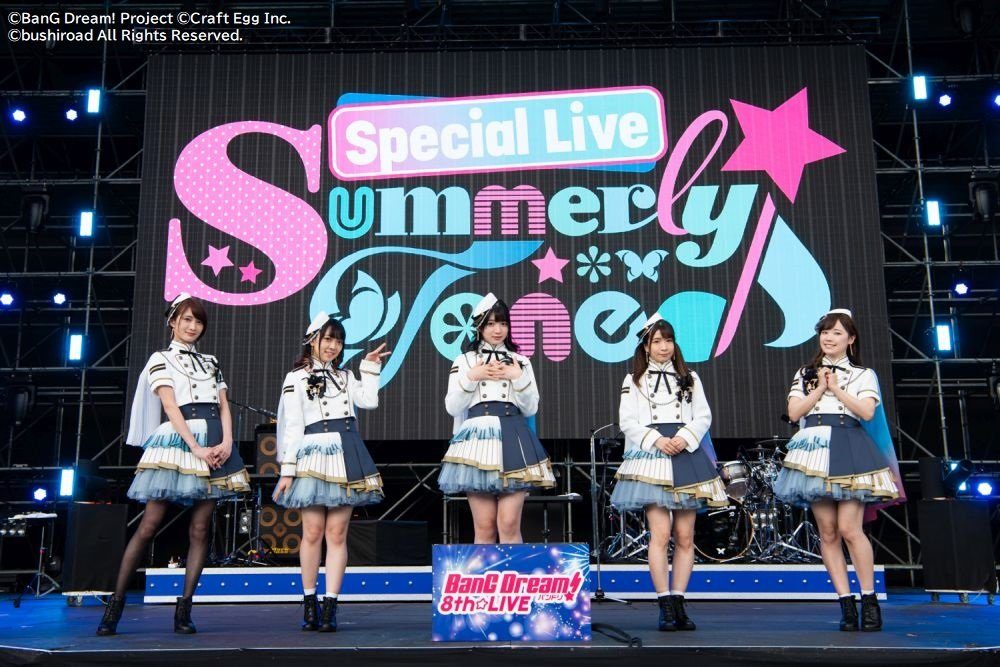 Morfonica is one of the latest additions to the BanG Dream! franchise and they are a real change of pace for the previous lineup. That much was made apparent when they opened with their original song Daylight. This was a perfect way to start out as it puts one of the key features of Morfonica on display quite well, their violinist, Ayasa. 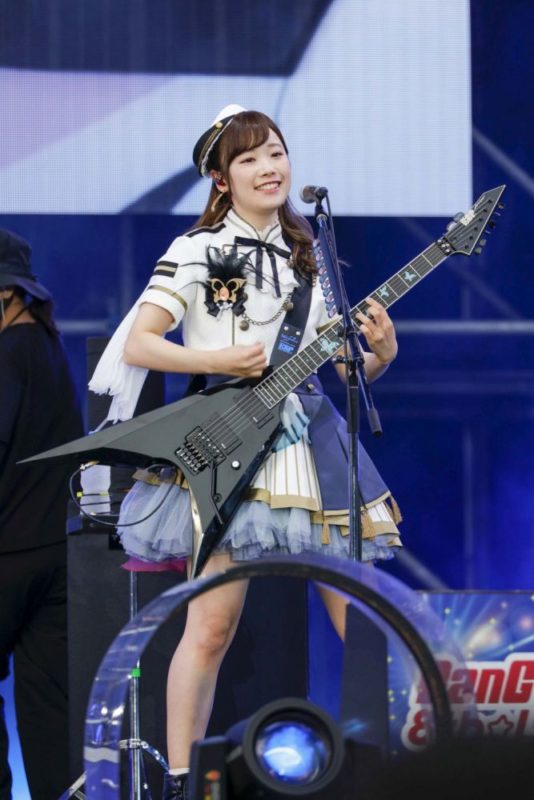 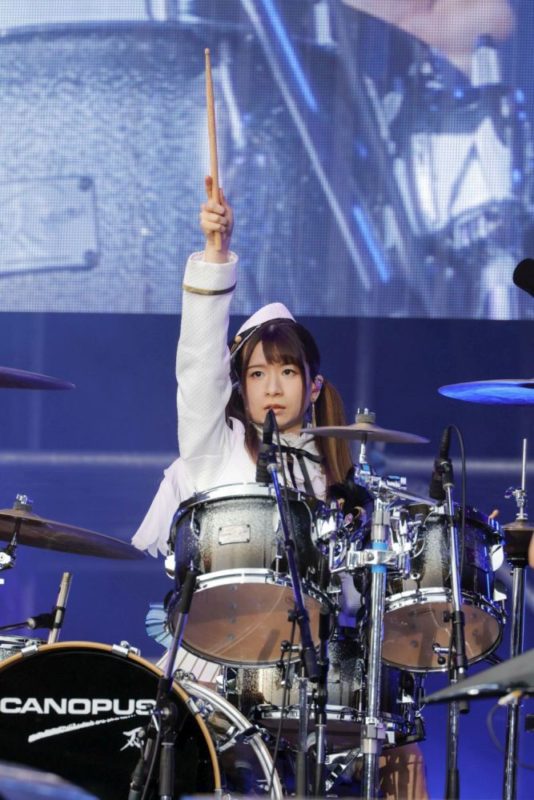 Although the violin definitely can dominate in parts of their show, it is not an unwelcome trait. However, each member of the group definitely has something to bring. Killer guitar riffs and precise drumming helped accent their performance and put them a cut above. They are tied together with the serene vocals of Amane Shindo. Her vocals shone through in their performance of ChAngE.

Morfonica peppered its set with some great MC work. There was a bit of comedy and even a few reminders to stay hydrated during the event. I never knew that drinking water could be so cute. Morfonica then capped off the set with another original song, Bloom Bloom.

As concert veterans know, in between sets there is a bit of a lull in the action. Staff members have to get all the next band’s equipment in place and soundchecks need to be performed. The list goes on with all that is needed to give a flawless performance. This event had a great way of handling this process though. Between each performance, there was a small BanG Dream! News segment. These segments kept the audience entertained by letting the band members’ personalities shine through. The effort put into keeping the audience engaged really helped create a great atmosphere.

Up next was Ami Maeshima (as Aya Maruyama), with RAISE A SUILEN as the backing band. Normally, fans don’t get to experience too much of Pastel＊Palettes live, however, with the support of RAISE A SUILEN, we were able to experience a full set of their music starting with Kyu~mai＊flower.

Ami was one of the most physically active performers of the event. She had to remain in character and master all the choreography of the idol group from the franchise. She was even able to sync up with the backdrop when it featured animated music videos.

The unique position of Pastel＊Palettes allows fans of the otherwise rock-oriented music to experience some real idol hype. Nothing really says high energy like roaring applause when the vocalist takes a drink of water and exclaims how delicious it is. Well, nothing but the absolute energy behind Unite! From A To Z☆.

Near the end of their set, Pastel＊Palettes brought out another surprise. The voice behind their bassist Chisato Shirasagi,  Sumire Uesaka, made an appearance on the massive monitors used as backdrops for the performance. This allowed for a really interesting rendition of Yura-Yura Ring-Dong-Dance. Ami and Sumire were perfectly synchronized in their dance and vocal work. Although it was a little bit sad that we couldn’t get both girls on stage, the compromise was well received and lent itself well to the venue’s set up.

As the sun began to set, the final act took the stage, Poppin’Party!

Without a doubt, Poppin’Party is the face of the BanG Dream! franchise. From the conception through present day they are the number one. As such, it only makes sense that they would be the final act of the night. To make it all better they really came out swinging with their songs Time Lapse, and Initial. Given the title, it isn’t all that surprising to think of using an actual time-lapse for the footage on the monitor during the song. However, the backdrop at this point of the show was immaculate. The slightest orange glow from the setting sun made a perfect contrast with the night sky time lapse on the monitors. Visually this was one of the best parts of the event.

After a bit of MC work, they came back swinging. Taking full advantage of the night sky, the song Boom Through Summer! greeted fans with a fireworks display. At this point, the audience was now getting sucked into an endless hype machine. 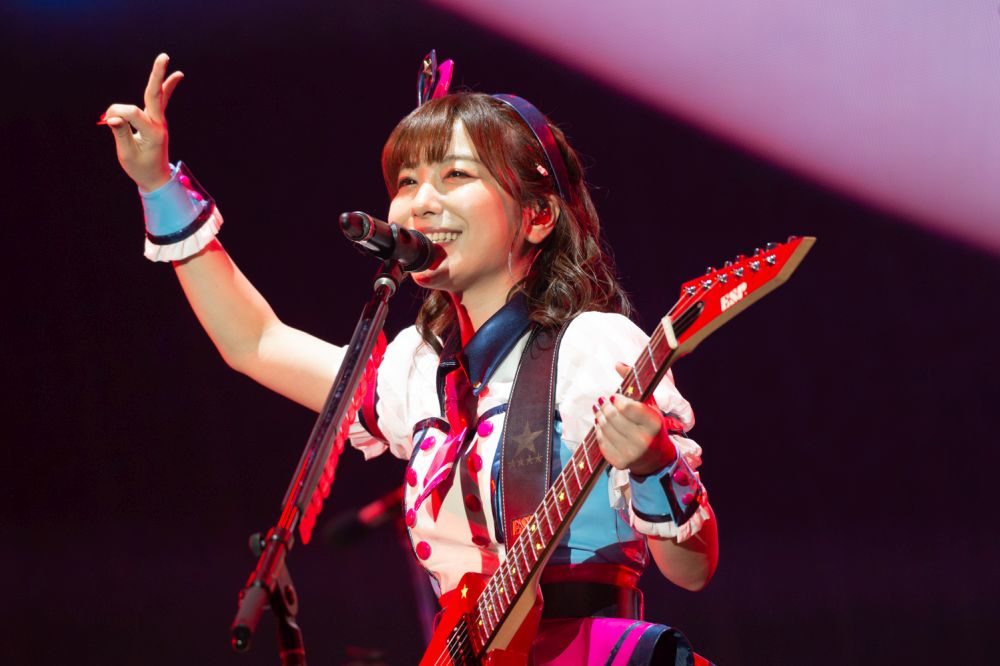 Working down their set, Poppin’Party riled fans up practicing clapping in rhythm. Once we proved out competence it was on to Summer Skies & SUN! SUN! SEVEN!. This led to another highlight of the night and a glimpse into the charm that Poppin’Party has to share. Partway through the song, the members of the band started dancing. Even drummer Ayaka Ohashi was dancing next to a snare drum she had brought down to the main part of the stage. However, there was one member who was not seen dancing, keyboardist Ayasa Ito. In fact, she was a bit upset. A bit too close to being in character she halted the entire show to scold the girls, essentially proclaiming that they are a band and they should act like it. Thus the band picked up again where they had left off.

This wasn’t the end of the antics of the night however. As the song reached the same peak the girls remained focused. Against all expectations though, Ayasa was now dancing more happily than anyone else previously. Bassist Rimi, known for her character’s calm almost meek demeanor, had snapped. Speaking like an absolute ruffian using rolled Rs, she scolded Ayasa with the same words she had preached before. Again, collecting themselves they went straight into the middle and reached the peak just as before. Now, they were all dancing. 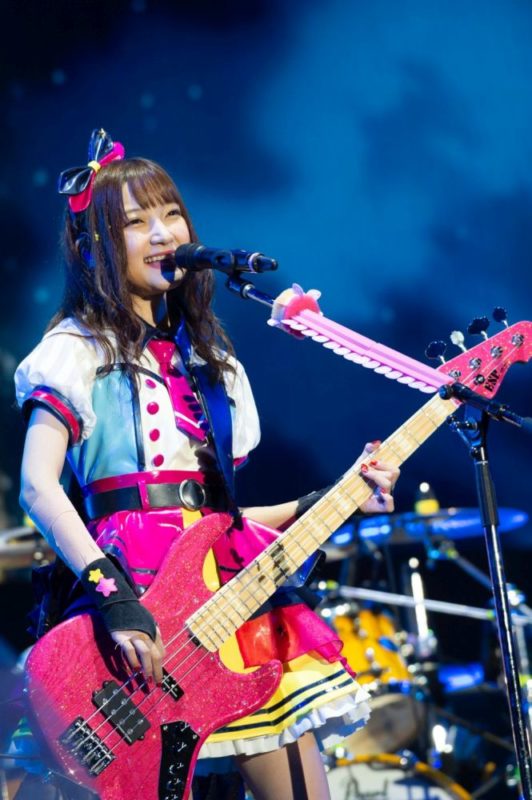 The rest of their set progressed seemingly without any mishaps, that was until Poppin’Party seemed to be attempting to cover FIRE BIRD, a track by sister band Roselia. Much to fans’ surprise, however, Poppin’Party could not finish its version of FIRE BIRD as the screen behind them began to receive some interference and cut them short. As the hissing grew, the voice of Roselia’s vocalist Aina Aiba could be heard. Her character Yukina Minato appeared briefly before Aina Aiba herself was on screen. This would be yet another scolding for the band. They were told to stick to their own “la la la” and thus opted for their own song STAR BEAT!~The Heartbeat of the Stars~.

Despite the night nearing its finale, the girls kept the fans going. During Teardrops the band even went as far as to employ pyrotechnics. The sun had completely set by now and it was truly beautiful. Although it was a bit unexpected, the fire really matched the band’s energy as the pushed on with a volley of fireworks into their final track, Mirai Train. As gracefully as they had arrived, they left with a bang and some lights to watch fade into the night.

Not yet satisfied, fans clapped in unison matching the rhythm of an encore chant. After some time had passed, Aimi, Ami, and Amane appeared on screen to assist us in our plea for an encore. It took some time and some hands were definitely tender that night but the girls came back out. This time though, they weren’t alone. All the performers of the night came to the stage to help send off the fans with a special rendition of “Straight Through Our Dreams! 8th☆LIVE ver”. Pretty much every bit that they had put on display was fair game here. This made for a true spectacle of a finale. I had thought they used a great deal of fireworks for their earlier displays but that finale really proved me wrong. With parting words, a final barrage of fireworks ended the night and signaled for fans to head home in high spirits. 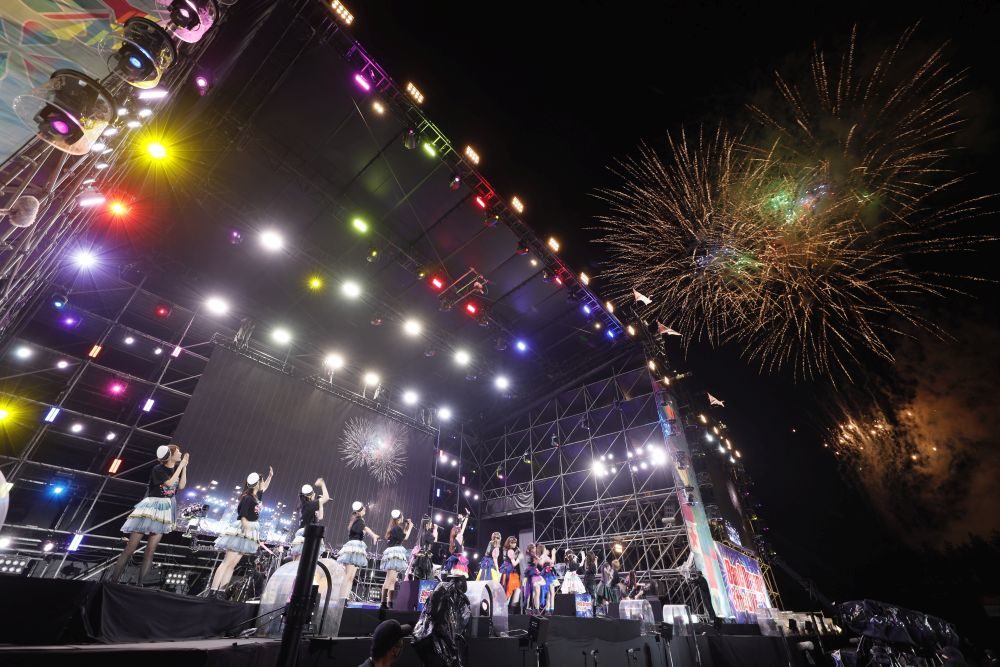 All the performers of the night saying good bye to the fans.

Thus, the BanG Dream! 8th☆LIVE Summer Outdoors 3DAYS came to a close. In a time where people are living in fear of a pandemic, Bushiroad put on one heck of a show. The measures taken to prevent the spread of the virus and the sacrifices that had to be made for the show were definitely appreciated. But most definitely, the performance of that night really shone through. Most people here in Japan didn’t have much of a summer and probably missed out on their usual fireworks shows. But, with the hard work put in by the staff and performers summer felt real again.

If you’re looking for a night of fun and some good tunes, definitely head out to BanG Dream! live.