At the beginning of the year, MIYAVI announced he will be releasing a new EP every month starting from March without any prior notice or information of the content. The wait is finally over as MIYAVI drops two new songs, entitled Long Nights featuring Sonita Alizadeh, and In The Crowd featuring Seann Bowe.

Long Nights is one of the first tracks written after MIYAVI’s visit to Lebanon’s refugee camps. The new mix includes vocals and rapping in Farsi (Persian) from Sonita who is an Afghan refugee rapper. They performed this track together back in January 2018 during the UN Peace Is event. He believes Sonita is the only one who is fit to sing the lyrics behind Long Nights.

In The Crowd featuring Seann Bowe is one of the more popular and upbeat songs played during his live performances. Seann is the producer for quite a few tracks for MIYAVI, working on songs including Fire Bird, Samurai Sessions Vol. 2, and Afraid to Be Cool/Raise Me Up, so we look forward to what he has in store for us in this collaboration. 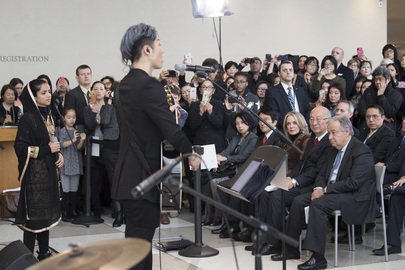 MIYAVI and Sonita performing at UN Headquarters for the “Peace Is” event.

We’ll probably continue seeing MIYAVI collaborating with other musicians and experimenting with new sounds. So, we wonder what digital EP will be next. Can you guess? Comment down below.