lynch. abruptly announced they will go on a temporary hiatus after their 17th Anniversary Premium Live ‘THE IDEAL’ performance on December 31, 2021. The band also published an accompanying interview detailing the reasoning behind the sudden decision. Since the interview is considerably long, we have broken it down for readers to get a better understanding of the situation. The initial announcement has been translated:

Thank you for always supporting lynch.

lynch. will enter into a temporary hiatus after the 17th Anniversary Premium Live “THE IDEAL” scheduled on December 31, 2021.

We sincerely apologize for such a sudden announcement.

The main takeaway from the interview is that in order to keep lynch. going, the band should stop all activities before restarting again. However, one major factor is vocalist Hazuki struggling with songwriting from around the time of working on the 2016 album AVANTGARDE. Despite this, he created albums XIII and ULTIMA but it was undeniably difficult. It should also be taken into account that Hazuki is the main composer of lynch. and has written 80% to 90% of their songs thus far. This has seemingly taken a toll on Hazuki.

In the interview members also reflect on their time in the lynch., their own abilities regarding songwriting, their thoughts on this temporary hiatus, the weight behind the word “hiatus”, their output as a whole, and everything leading up to such a decision.

lynch. began discussing the band’s future before their Hibiya Open Air Concert Hall performance in October 2020. This was the same year the coronavirus pandemic impacted their activities as a whole. This pause, in turn, gave them the opportunity to rethink their future moving forward.

At that time, Hazuki suggested that lynch. should slow down its activities. However, it wasn’t until more than a year later the band finally agreed on this temporary hiatus.

Hazuki is adamant that he wants to perform at their postponed Nippon Budokan show by the end of 2022.

In the last few years, Hazuki started performing solo, singing song covers, including lynch. songs and his own original songs to a classical accompaniment. He even released his first solo album titled Souen-FUNERAL-. Guitarist Yusuke also formed a unit called Kenko with vocalist and guitarist Akito Matsumoto of Shinku Horou. However, lynch. confirms that this temporary hiatus is not happening because their respective solo or project is interfering with the band’s activity.

The band debates on using the word “hiatus”, stating it sounds like a scary word, like the beginning of the end, but that’s not the case for them. They see it as a way to prepare for a brighter future and that’s why they insist on using the words “temporary hiatus”.

lynch. released limited collectors box set 2011-2020 COMPLETE BOX on December 27 to commemorate 10 years since their major debut on KING RECORDS. This collection contains all their albums from their major debut album starting with I BELIEVE IN ME to their recent album ULTIMA. It also includes singles from MIRRORS to ALLIVE but not their live-distributed single ANATHEMA nor their live house support single OVERCOME THE VIRUS. Finally, it also has a Blu-ray music video collection starting from I BELIEVE IN ME to ALLIVE. 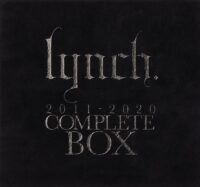