Miku Kobato of BAND-MAID fame flies solo as JPop idol, cluppo, with the release of single PEACE&LOVE. While the debut is truly her new solo project, quite obvious given the timing that it is an April Fools’ Day practical joke. Nevertheless, Miku parties up in a new genre she calls “HIPPIE-POPPO” as 70’s era feel-good vibes collide with 80’s pop-rock. Especially apparent in the music video, she is decked out in pastel colors while striking poses like a “gravure idol” or Japanese glamor model. Seriously, you have to watch this rockstar maid now turned into a Madonna material girl!

Yet with the sweet and fluffy humor of it all, the underlying messages are very positive and uplifting. Lyrics in both English and Japanese like “Let’s keep smiling” and “Happy go lucky lives” express ideals of optimism and hope. Conversely, it’s difficult to conclude if this is genuine idol flattery or outright parody. Whatever this is though, should put a smile on the face of the most stubborn grouch.

Previously in 2018 and 2019, BAND-MAID dropped April Fool’s Day music videos as their alter egos BAND-MAIKO. Now, Miku found a way to invent a new alter ego for herself as a contrast to her usual maid image. Also, calling herself “cluppo”, a name that twists her signature catchphrase “kuruppo” by adding “CLUCK” to the pigeon coo of “PO, PO, PO”. And so begins this new era where instead of world domination by a hard-rocking maid, it’s world peace with a JPop idol! 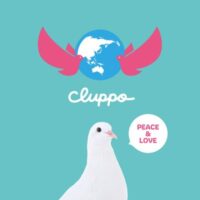