As with any multi-artist show, most artists with the most draw are saved for the later parts of the night. After clawing through the competition and rising up in the ranks, DEVILOOF has climbed towards the end of the ticket at Metal Square Volume 5, Shibuya, Tokyo. Not only this, the boys even had a member of the night’s final act join in on their set, vocalist Ryoji of GYZE. A show to be remembered indeed.

As the night approached its end, DEVILOOF finally took the stage. Admittedly, they were the sole reason I planned to attend. However, it soon became clear that there were some seriously worthy acts at Metal Square. 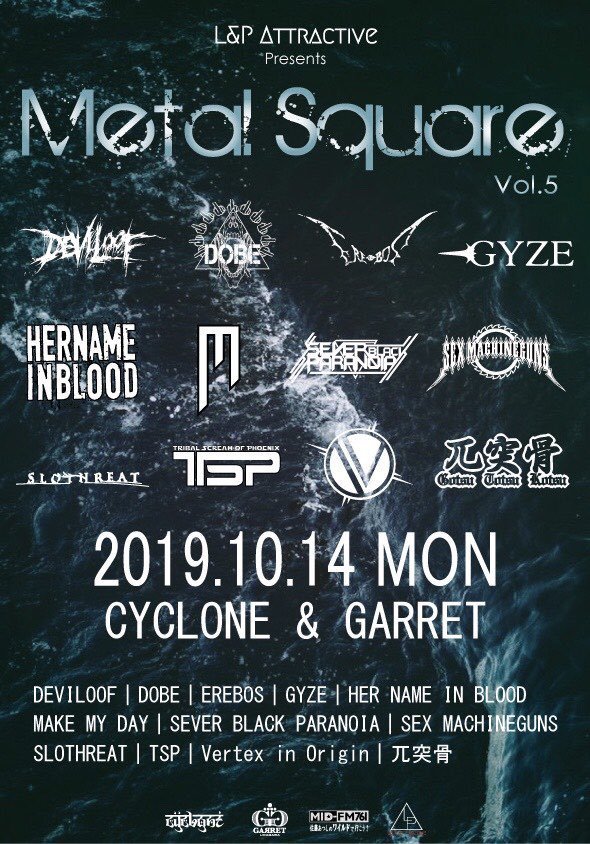 The Lineup for Metal Square Vol. 5

DEVILOOF opened up with a crowd-pleaser, LOVER. The deep distorted guitars, pounding bass, masterful drumming, and absolutely guttural vocals penetrated into the audience. DEVILOOF was immediately in control of the crowd. The small venue lent itself way to the soul penetrating bass drops of the song. It was a violent pleasure.

Following LOVER was ESCAPE, an absolutely beautiful fusion of the dual guitars of the band and the vocal command of Keisuke. One of their few songs with clean vocals. However, what stands out here is the beautiful guitar work by guitarists Ray and Aisaku. Lucky for us, Ray posted a video for you to enjoy the solo partway through the song.

After a bit of MC from Keisuke the band started playing a somewhat unfamiliar track. Not being a native Japanese speaker I didn’t pick up on what was happening until the song got underway and GYZE’s very own Ryoji took the stage with Keisuke. The shirtless duo and the band absolutely slaughtered a cover of ARCH ENEMY’s Silverwing. Straight from the opening, Aisaku and Ray completely took ownership of the song with their masterful guitar work. Just after a few lines, Ryoji took the stage running out from behind the band. At first, there was a slight confusion then absolute excitement. The audience erupted into cheers and the two singers did the song justice with their combined performance. Though Ryoji had left the stage, energy levels were still high.

Following up a collaborative act can never be easy. However, DESTINATION is a hell of a way to do it. DESTINATION is another one of DEVILOOF’s more melodic tracks and the vocal work of Ray really helps to tie the song together to stick out in any live performance. The song also had the whole audience chanting along to the chorus.

The night drew closer to an end with their second to last song, HERO=MURDERER. Absolutely hard-hitting guitars and an opening scream that could shatter bones. The crowd had broken out into a frenzy at this point. A true pleasure to watch. The endless headbanging meant that stiff necks would be aplenty the day after. To be honest I’m still sore two days after.

DEVILOOF closed out the night with Ruin, an oldie but goodie for the band. Of course, it wouldn’t be Ruin without a wall of death! We all knew it was coming and the participants were anticipating it from the start of the set. As the song dropped the walls slammed shut. Immediately after, the brave decided to start a full-on-authentic-mosh-pit. My prayers had been answered. I jumped in like a moth to a burning flame and lost it all. The violence of the pit lent itself extraordinarily well to Ruin. Keisuke even leaned into the crowd and let a rabid fan scream into the mic. It was almost a struggle to get him to let go but Keisuke wore a smile through it all.

Here’s to another unforgettable show and to DEVILOOF. You haven’t lived until you have experienced them.