Earlier this summer, the JROCK NEWS team headed over to Japan’s largest fan convention, Comiket, a biannual event focused on doujin (self-published) goods. This may include work by illustrators, authors, technicians, sculptor, cosplayers, and of course, musicians, which is what we’ll be focusing on here!

Our objective was to purchase great doujin music and greet the musicians with the limited time we got. Comiket opens at 10:00 and closes at 16:00, considering the extremely long queue during the morning, you’re most likely only able to spend four to five hours strolling the area, not to mention having to stand in line for the popular booths.

Comiket is usually a three-day event, but this year, the 96th Comiket was stretched to four days. Each day has its own theme and for Comiket 96, the fourth day was decided to focus on music, so it was a no-brainer for us to attend this day. We decided to visit the third day too just for fun, therefore, some of the photos below will be of that day. 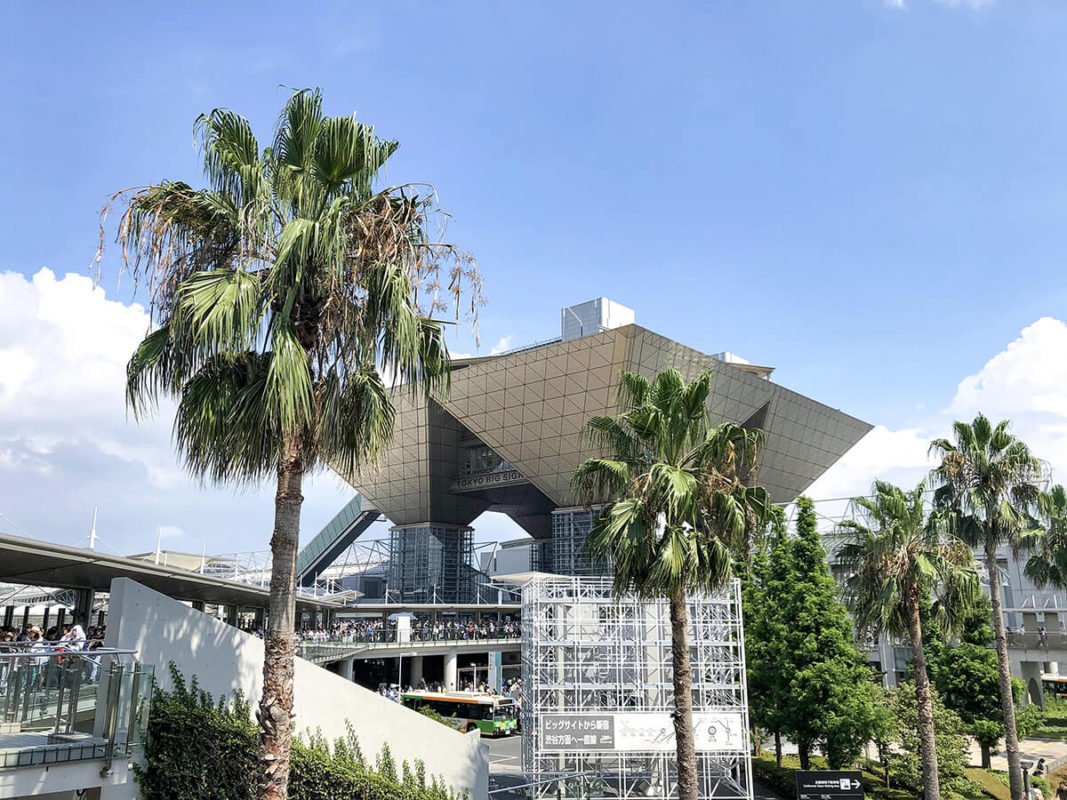 Before arriving at the four inverted pyramids, also known as Tokyo Big Sight, we had to line up in the largest queue I ever participated in. 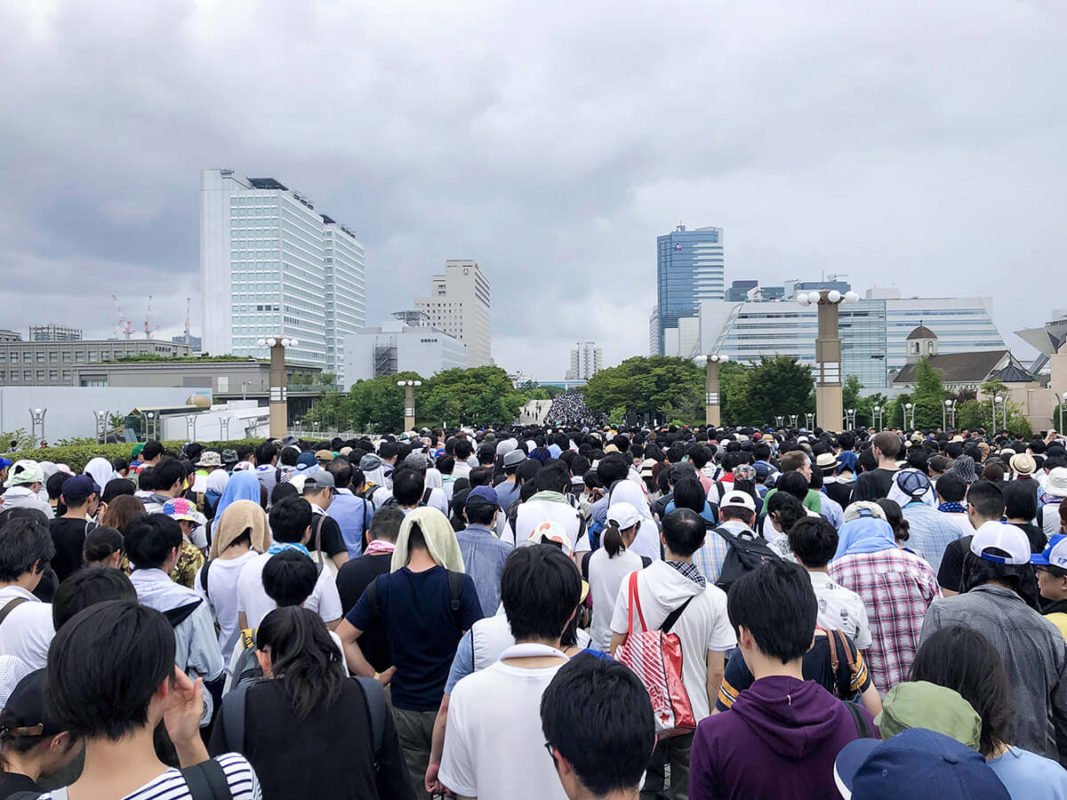 The entire bridge was filled with a sea of people, going further than what the eye can see. Yes, this is a bridge, and you can’t even tell.

On the day we went, it was estimated that 200,000 people visited. When combining all four days, a total of 730,000 people attended the record-breaking Comiket. 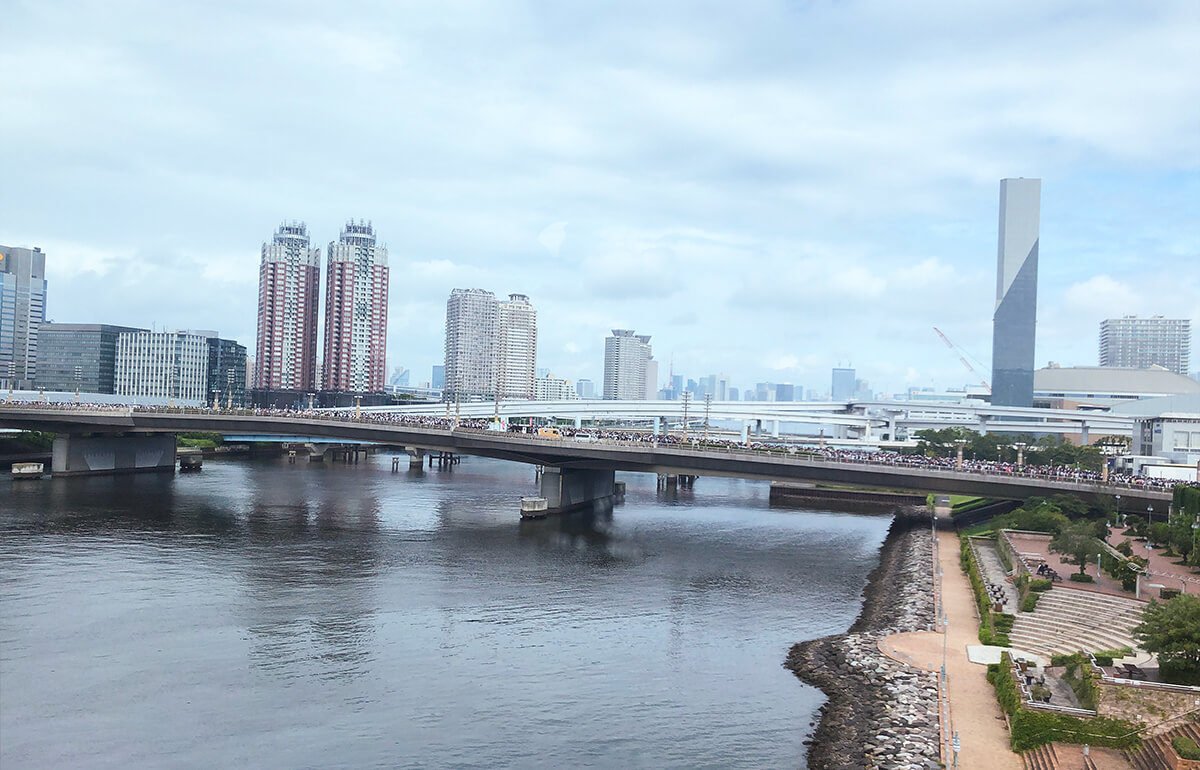 Here’s the view of the bridge before we joined ourselves. Even without the people in front of us, it takes 15 minutes to get to the venue from here, you can imagine how long the queue was. 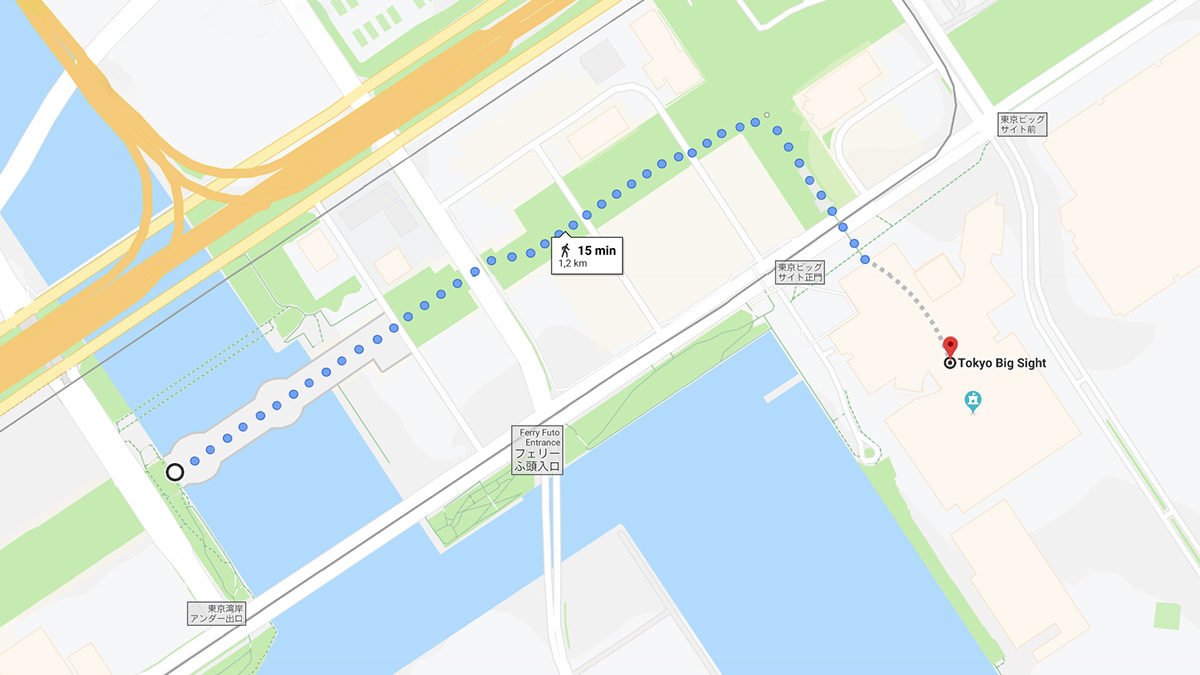 According to Google Maps, it’s 1.2 kilometers (0.74 miles) to the venue when starting by the entrance of the bridge. 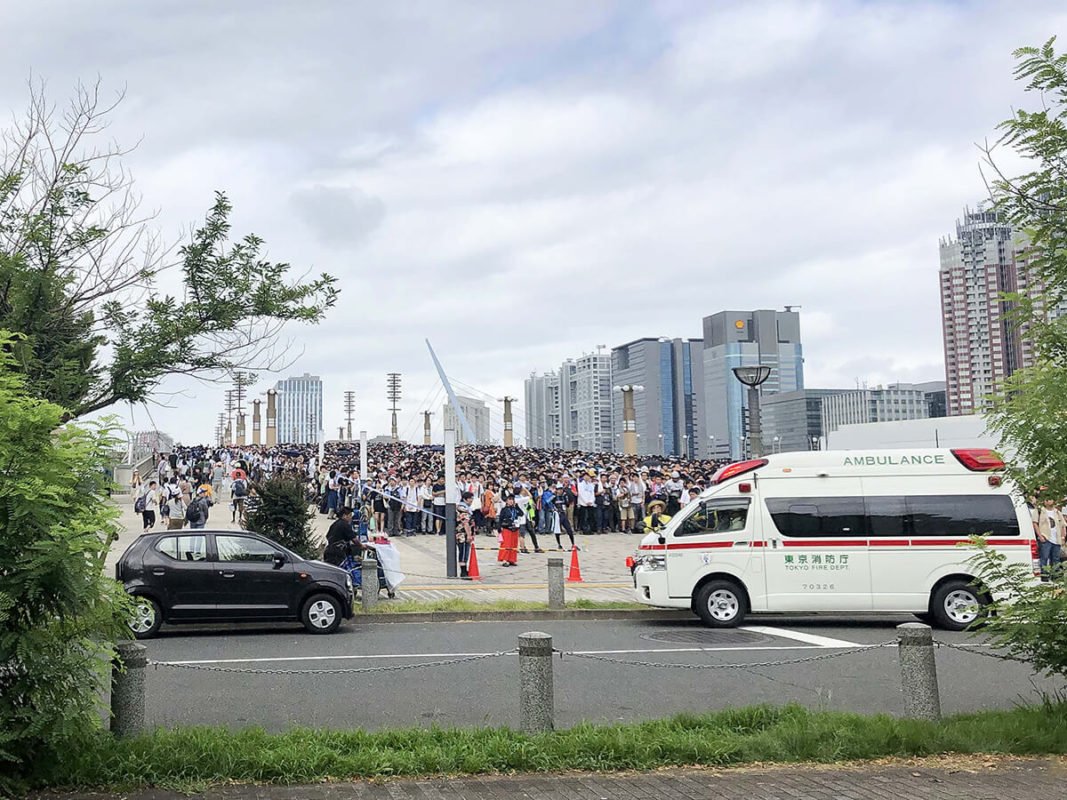 If you’re curious about why there’s an ambulance here, we believe this is where a hard-core Kantai Collection (KanColle) fan got defeated by heat. His last words before being carried away by the paramedics were “Enkan, katte kite“, which was him asking his friend to buy the KanColle doujinshi (self-published fan work) for him.

The weather that day peaked at 35 Celcius (or 95 Fahrenheit). It was quite cloudy so it wasn’t too bad—except for the KanColle fan of course—but the humidity made it somewhat uncomfortable, especially when the light shower kicked in. You’re also instructed not to use your umbrellas due to safety concerns. It might sound a bit odd, but this weather condition is considered almost ideal for queuing to the summer Comiket since the clouds block most of the direct sunlight. 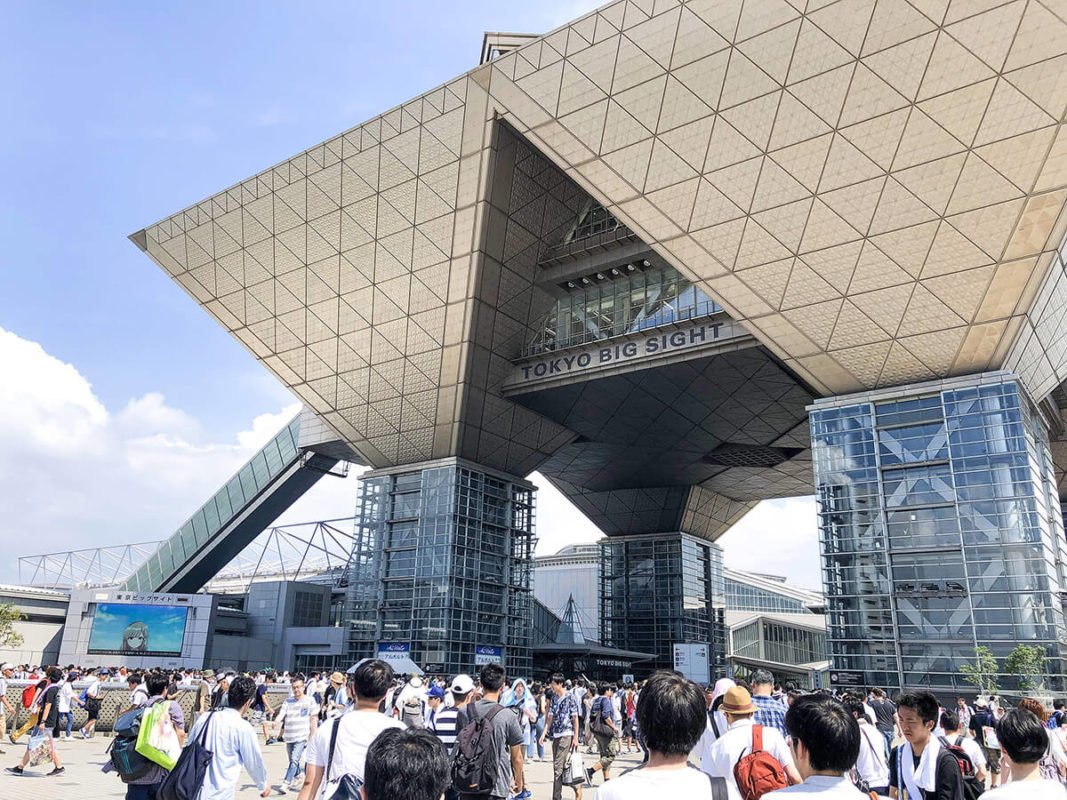 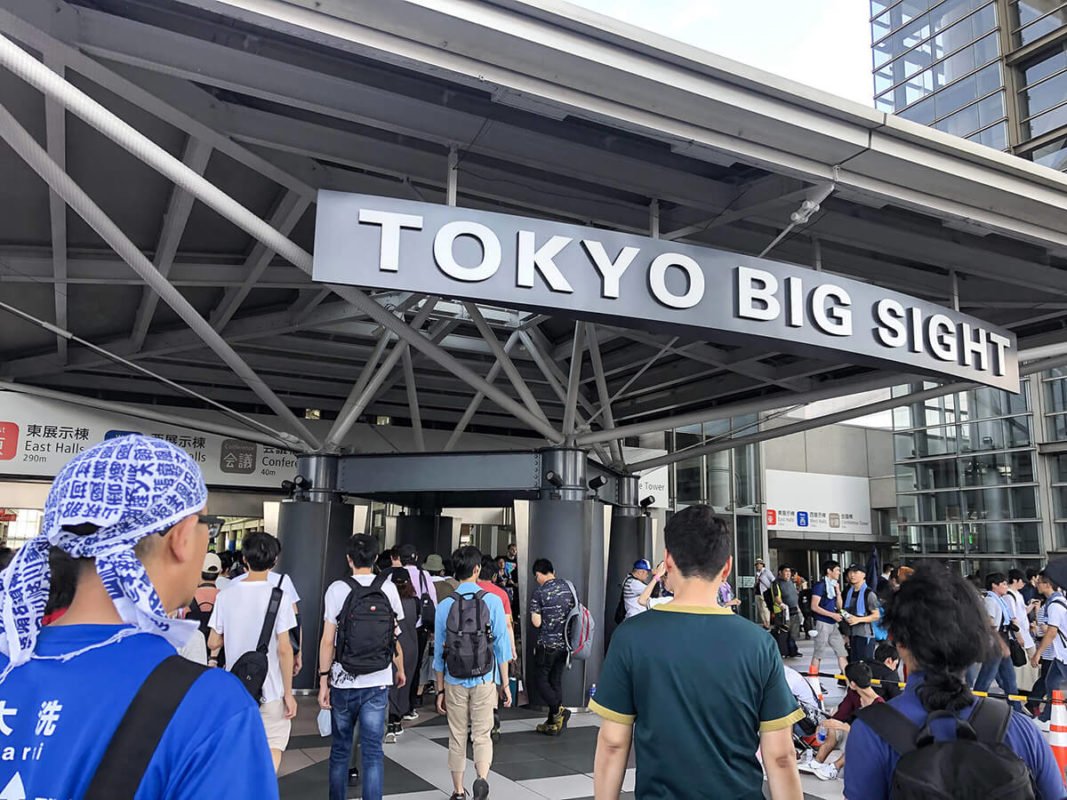 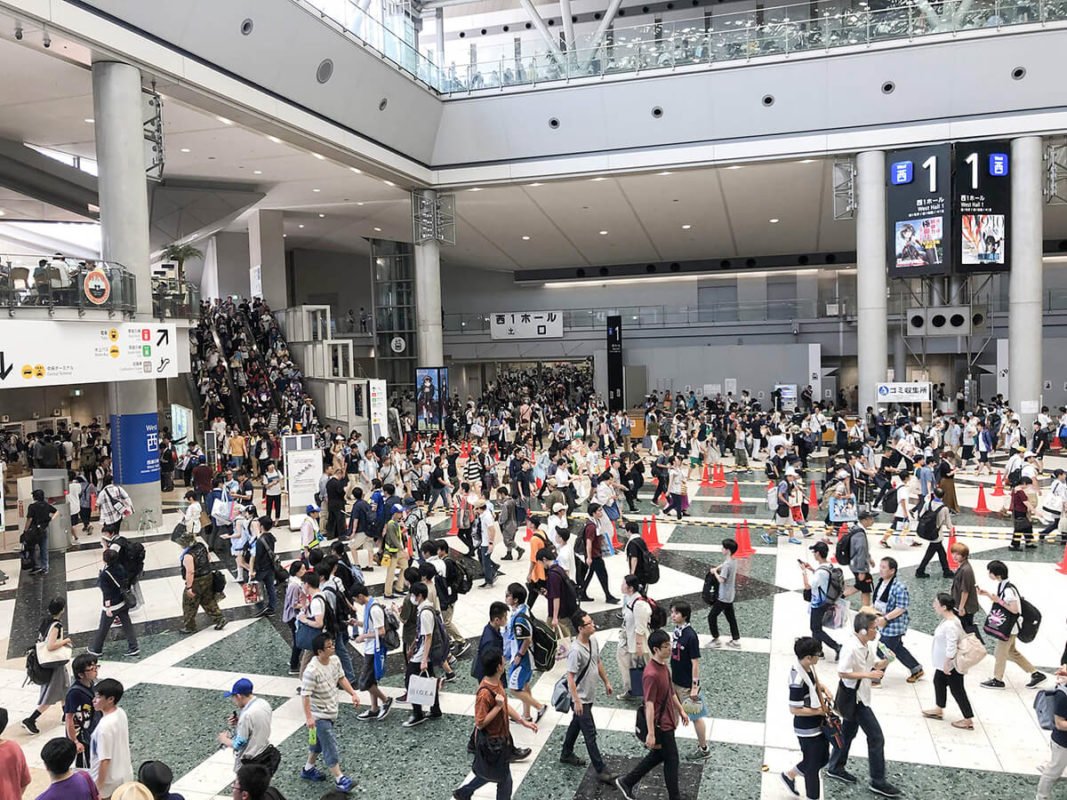 A waterfall of people making their way down the escalator. 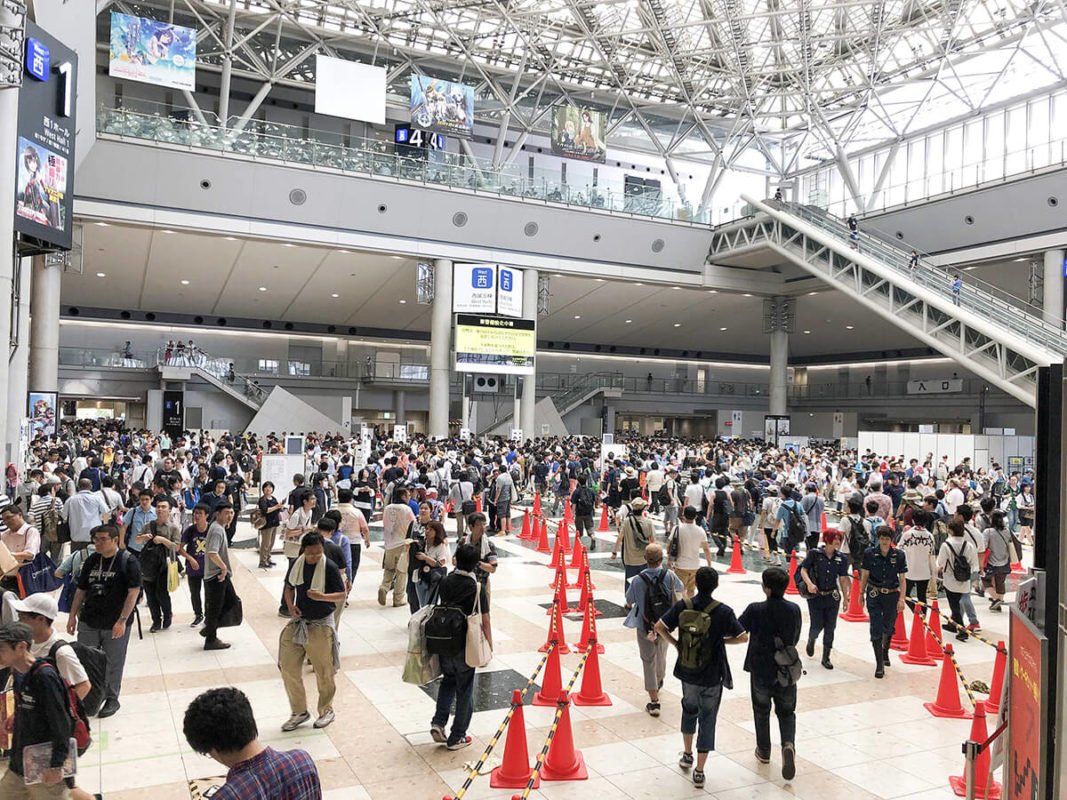 Entering the cross-section to head to our destinated hall. There are mainly four halls, the West and the South hall, both have two floors.

It’s important to know that just because you’re on the first floor of for example West hall, doesn’t mean you can easily make your way to the second floor of West hall. Designated paths have been prepared to prevent traffic jam so you might need to make a big detour, which is why it is important to plan ahead before you go. Meaning, research if your favorite doujin circle is attending, write down the locations of the booths, group the doujin circles according to their hall, plan your path, then execute! 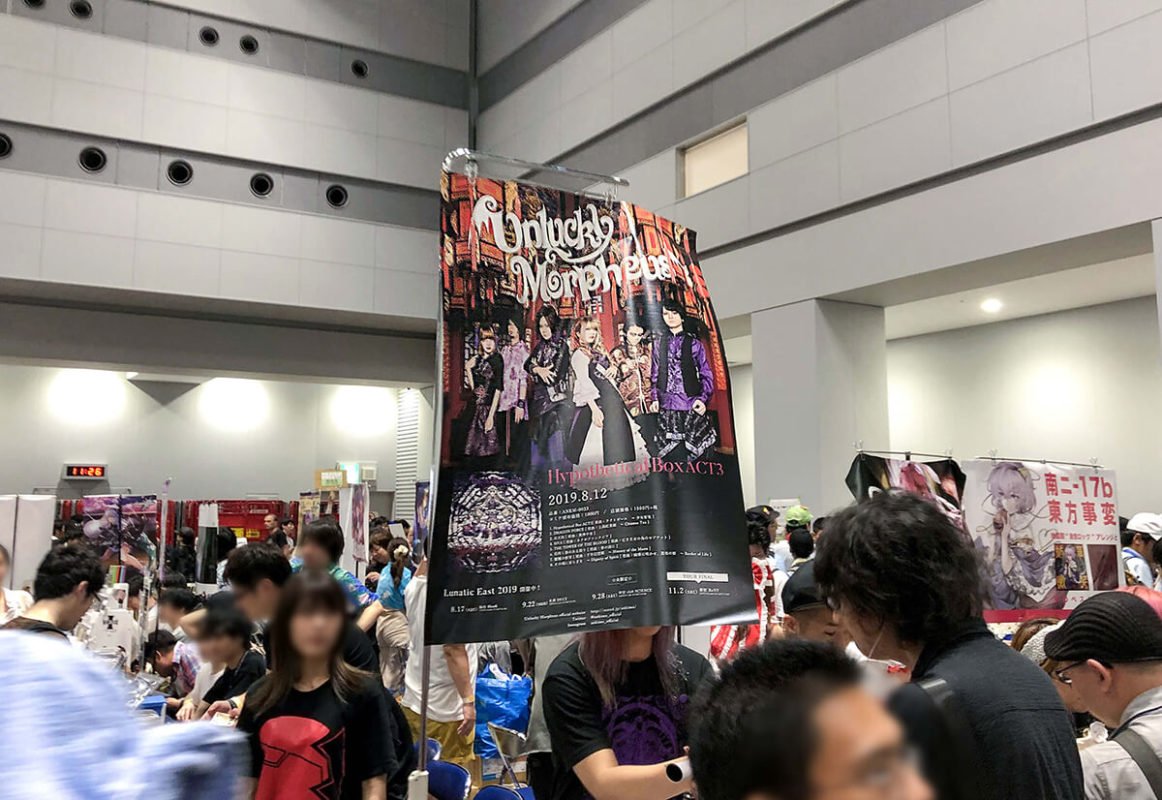 The first booth we spotted was Unlucky Morpheus. A doujin circle (self-published group) led by Shiren, previously in Yousei Teikoku. The circle has Fuki on vocals who in the past was active in the power metal band LIGHT BRINGER. Drummer Fumiya is also in the circle, from nekomanju and GALNERYUS. As well as violinist Jill from Rose Noir, bassist Ogawa from TRICK BOX, and guitarist Jinya from UNDEAD CORPORATION and Carbonic Acid. 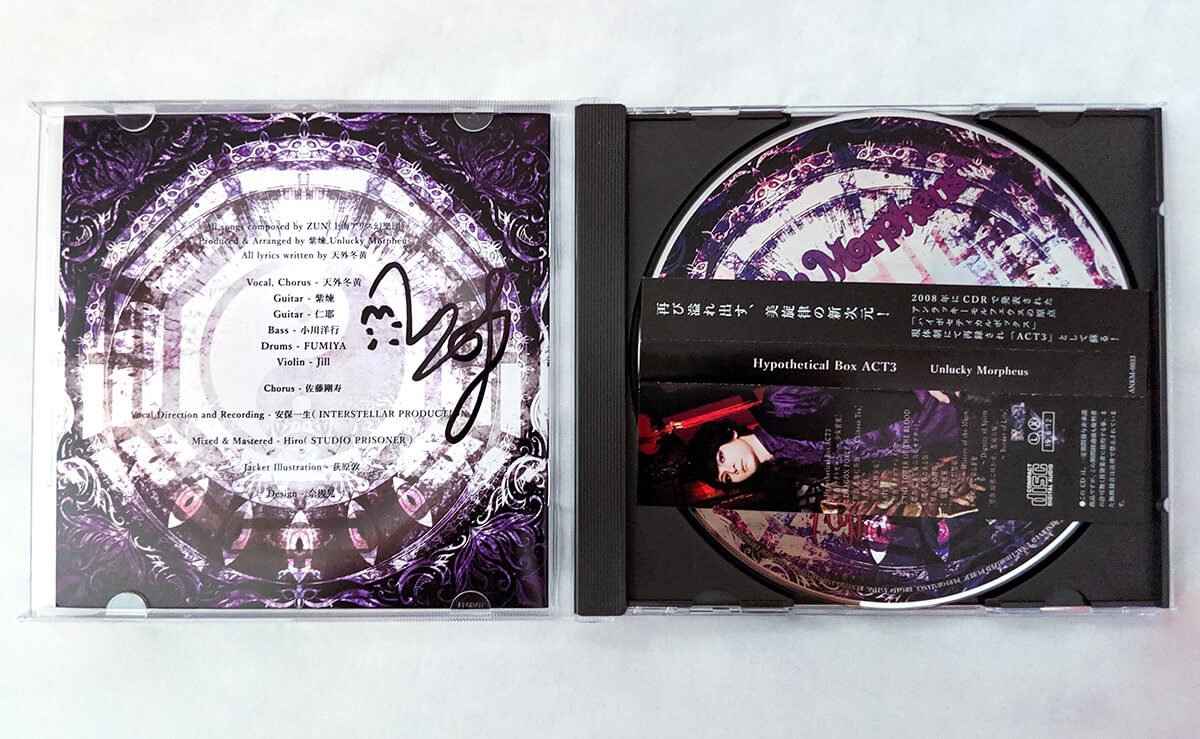 The CD edition of Hypothetical Box ACT 3, signed by Shiren. Any purchase made came with an additional poster. 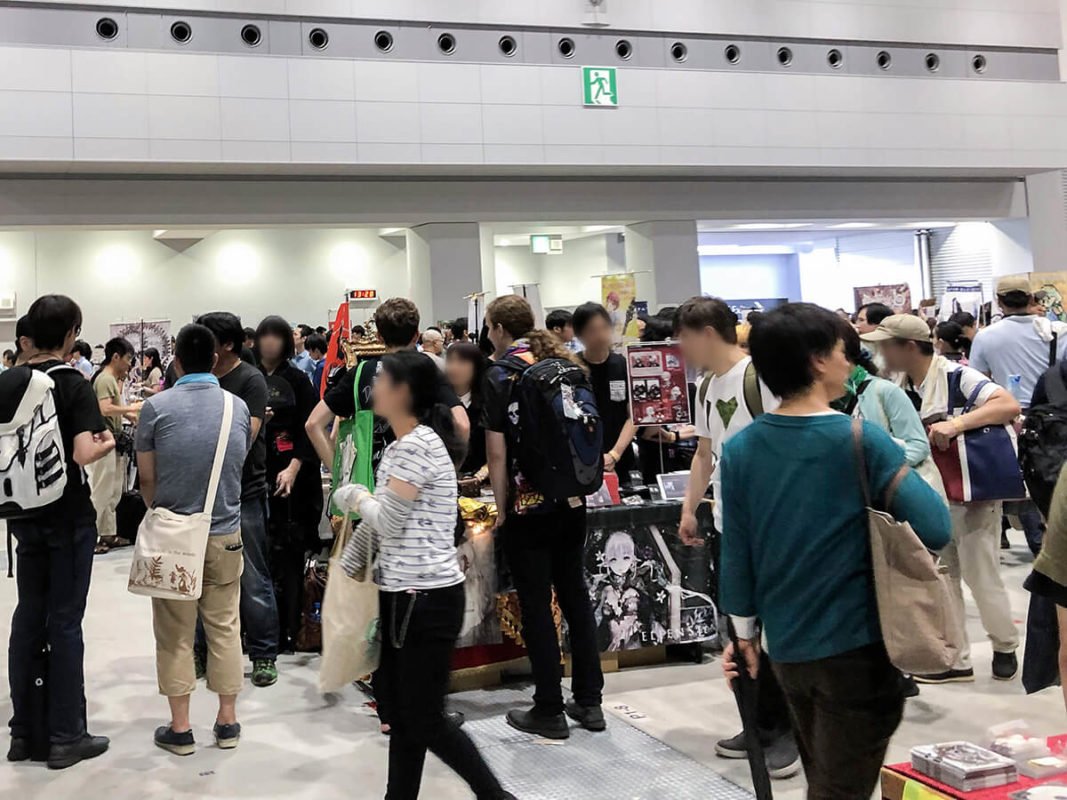 ELFENSJóN‘s booth. The circle is led by Kurose Keisuke, formerly in UROBOROS, and Asriel. 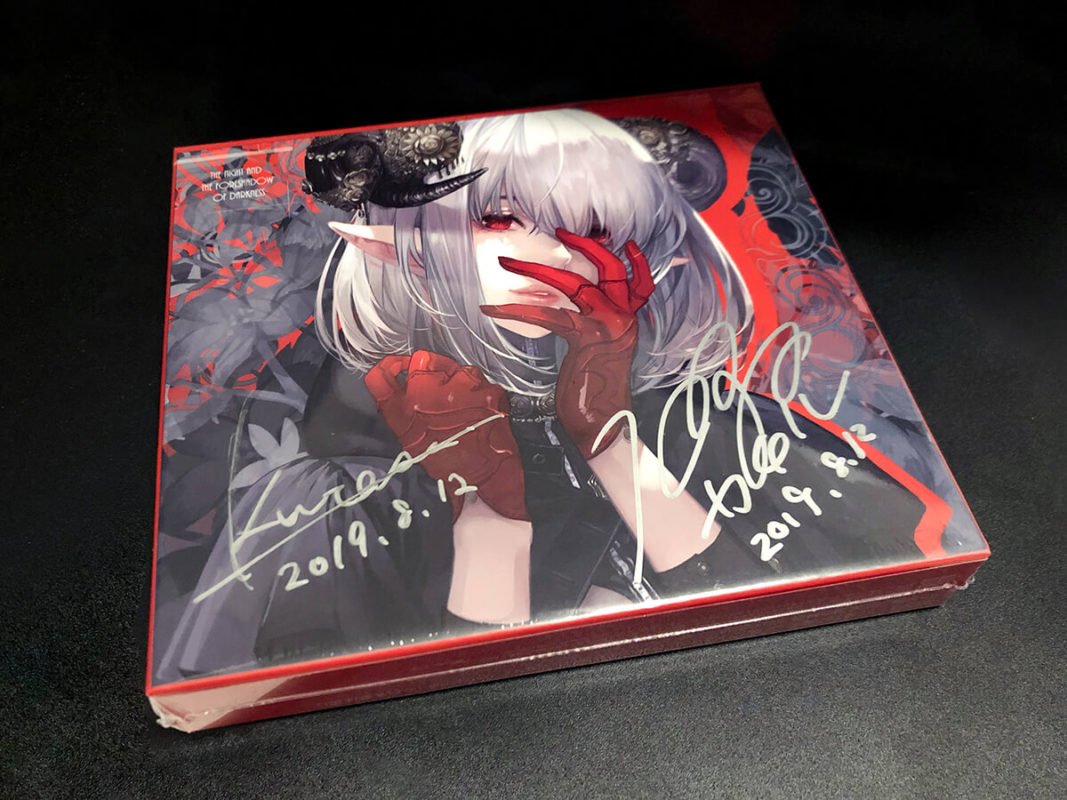 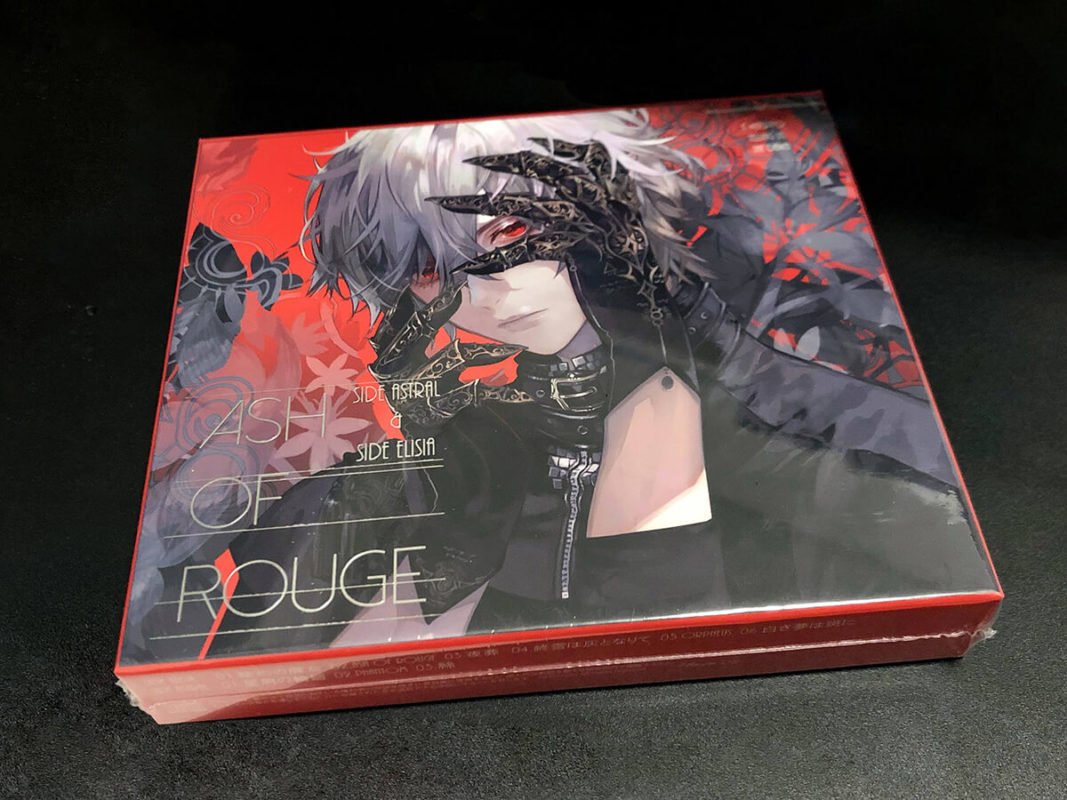 A signed copy of ELFENSJóN’s double-sided EP ASH OF ROUGE. There are two discs inside, labeled “SIDE ELISIA” and “SIDE ASTRAL”. The former offers six songs with Okogechan‘s female vocals and the latter, three songs with Kazuya‘s male vocals. The incredible artworks were illustrated by Kachiru. 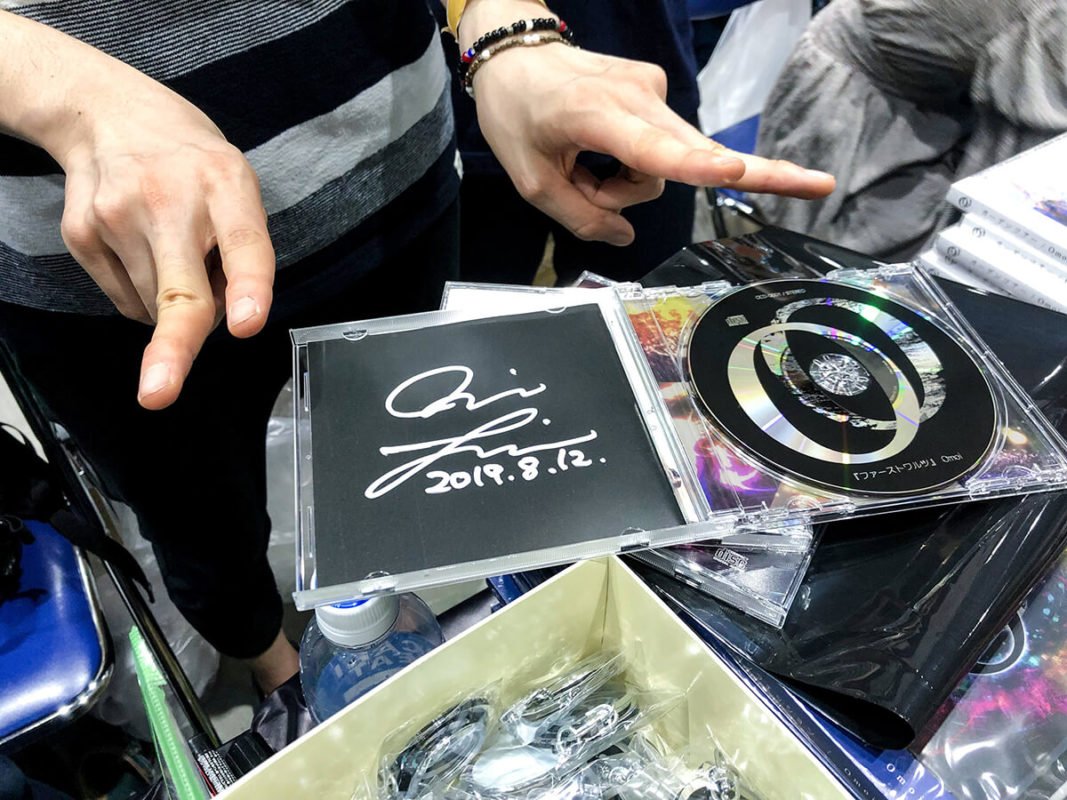 With Vocaloid producer Omoi. His song Teo was featured as the opening track in this year’s Hatsune Miku event Magical Mirai 2019. 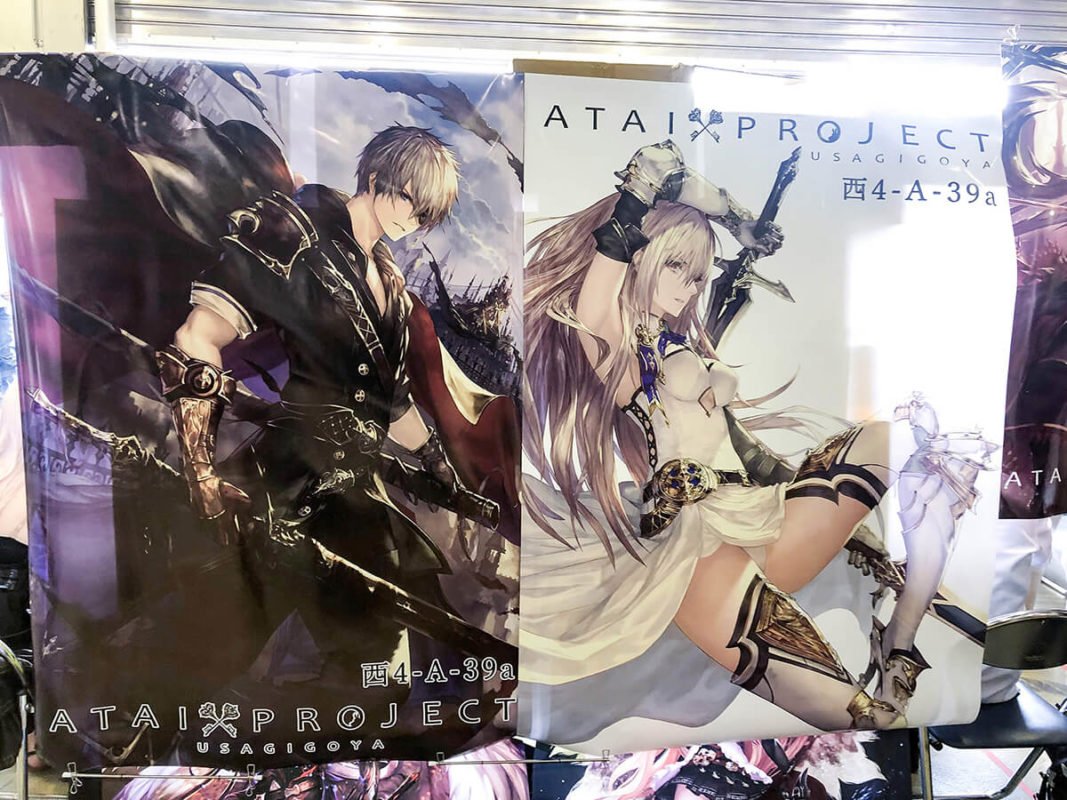 ATAI PROJECT under the circle Usagi Goya. The illustrator Mushimaro is responsible for art featured in the game Shadowverse, as well as Shingeki no Bahamut. You might also remember that the band SiM composed music for the anime adaptation of Shingeki no Bahamut a few years ago. The circle was selling music as well, although, only as a digital download code, offering no physical music products. 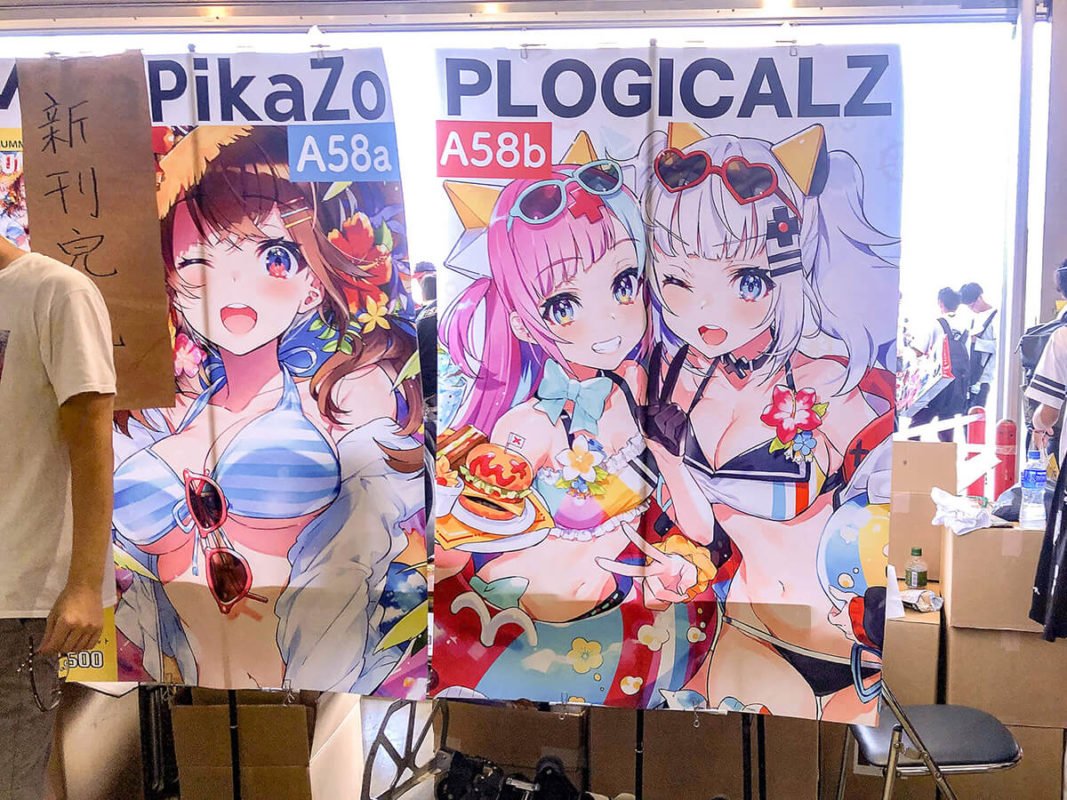 MikaPikaZo‘s two booths. She is famously known for being designer of the virtual YouTuber and singer Luna Kaguya (the character to the far right). Her Hatsune Miku character design was also featured as the main visuals for Magical Mirai 2018. 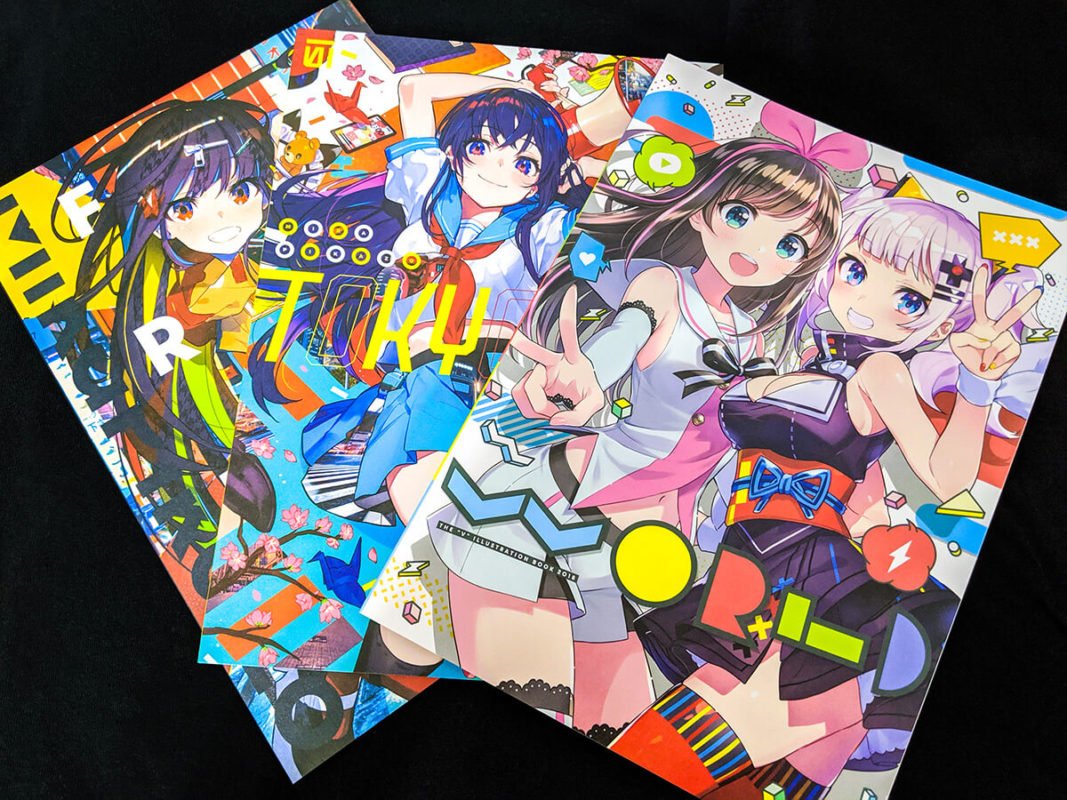 I got myself these art books MikaPikaZo was selling.

Before leaving the booth we luckily spotted redjuice (again this year) who is the illustrator of EGOIST and supercell. He is famously known for designing characters for anime such as Guilty Crown, Beatless, and the Project Itoh trilogy. 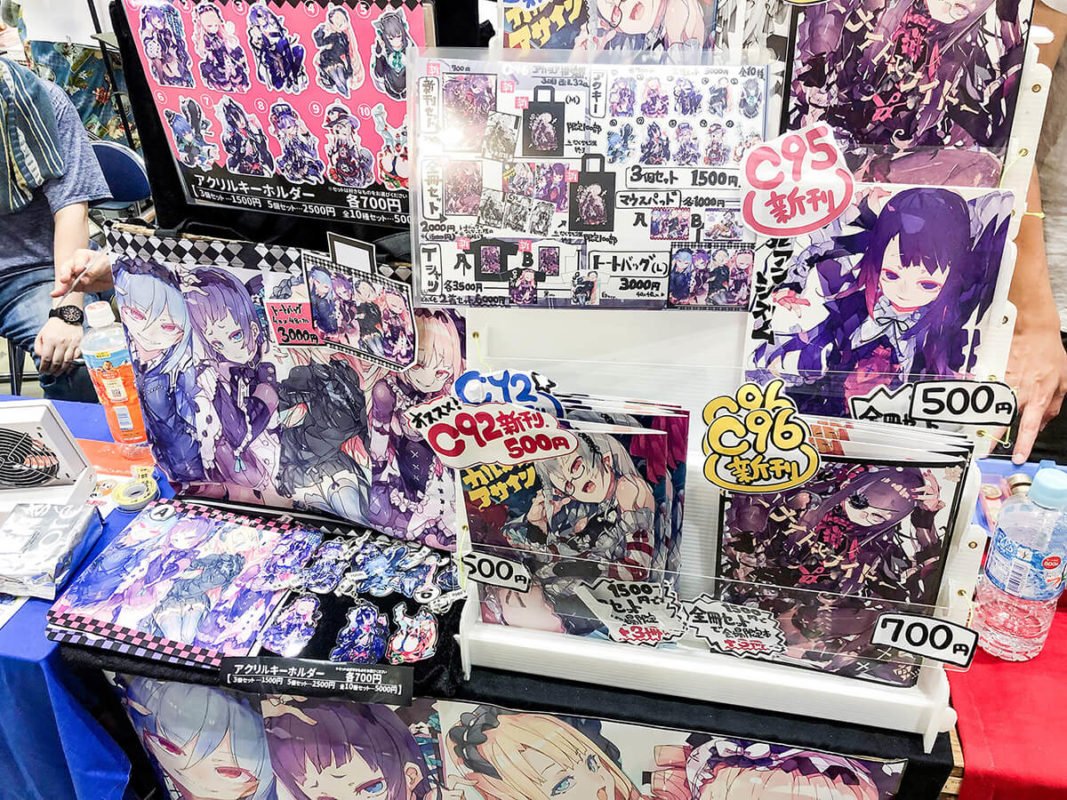 While making my way to my next booth, Kiyoichi‘s illustrations of gothic girls caught my attention. 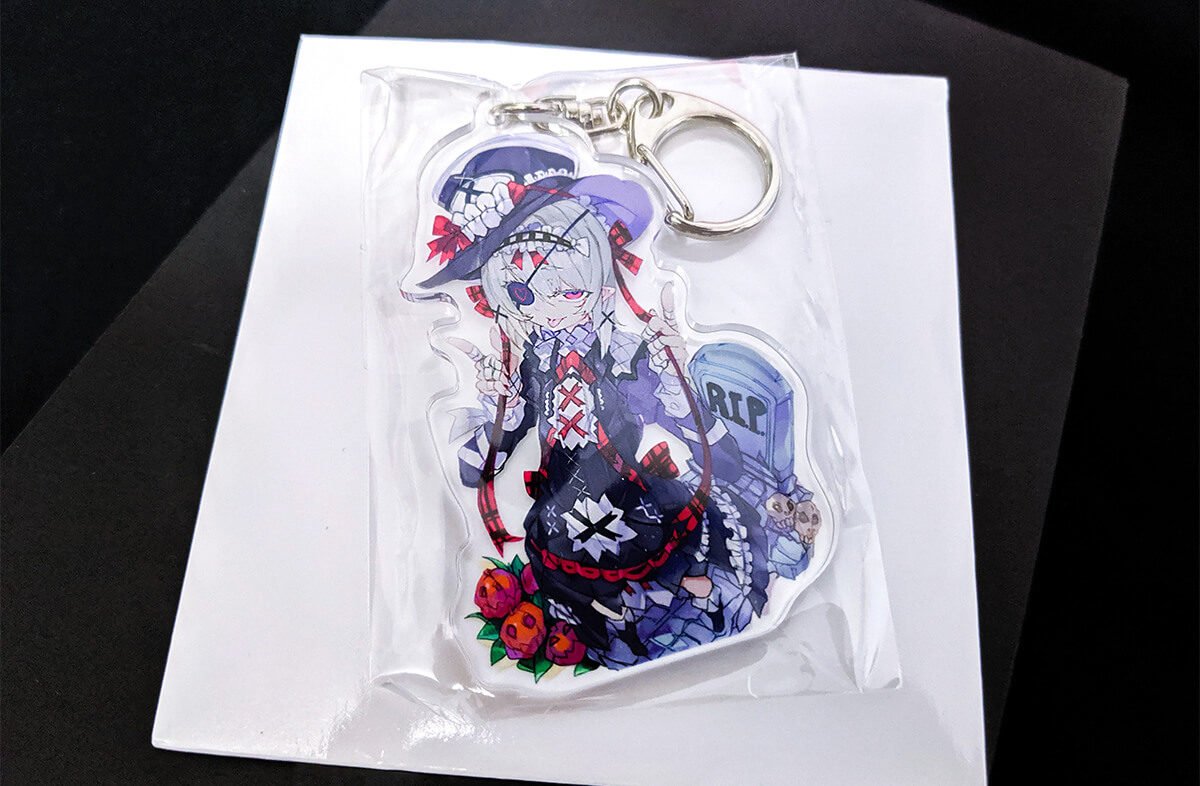 I previously never seen his work, but I really fancy the art style and decided to pick up an acrylic key chain. 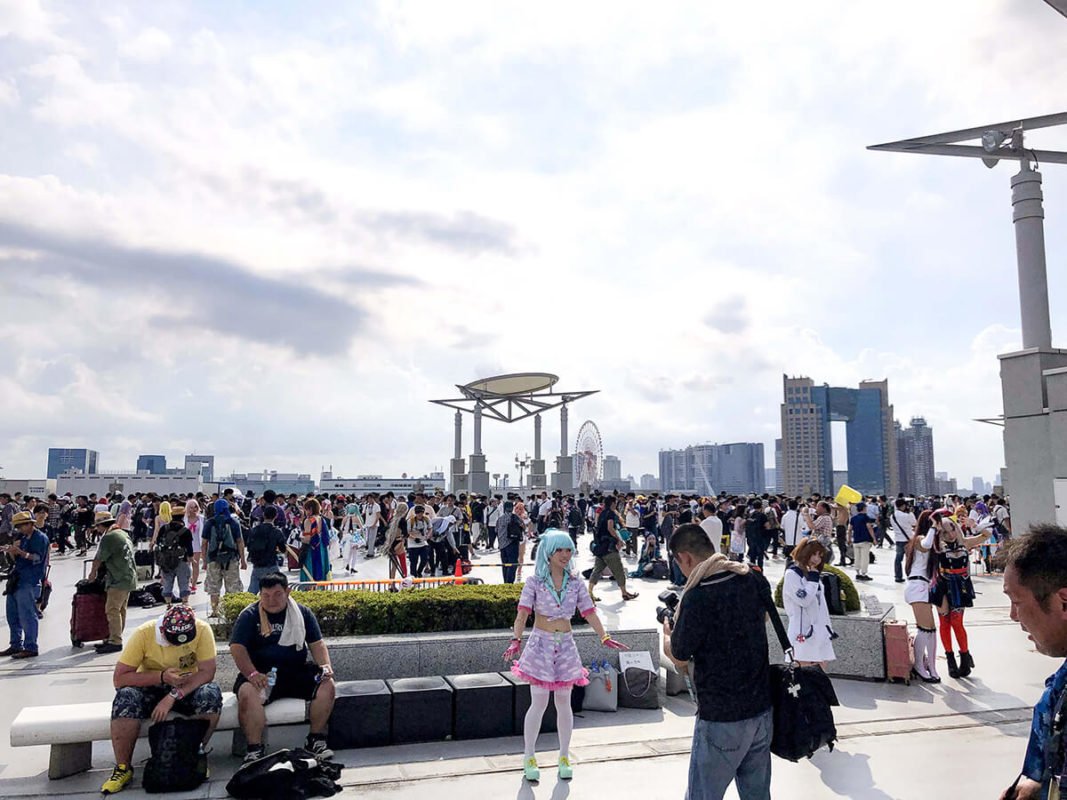 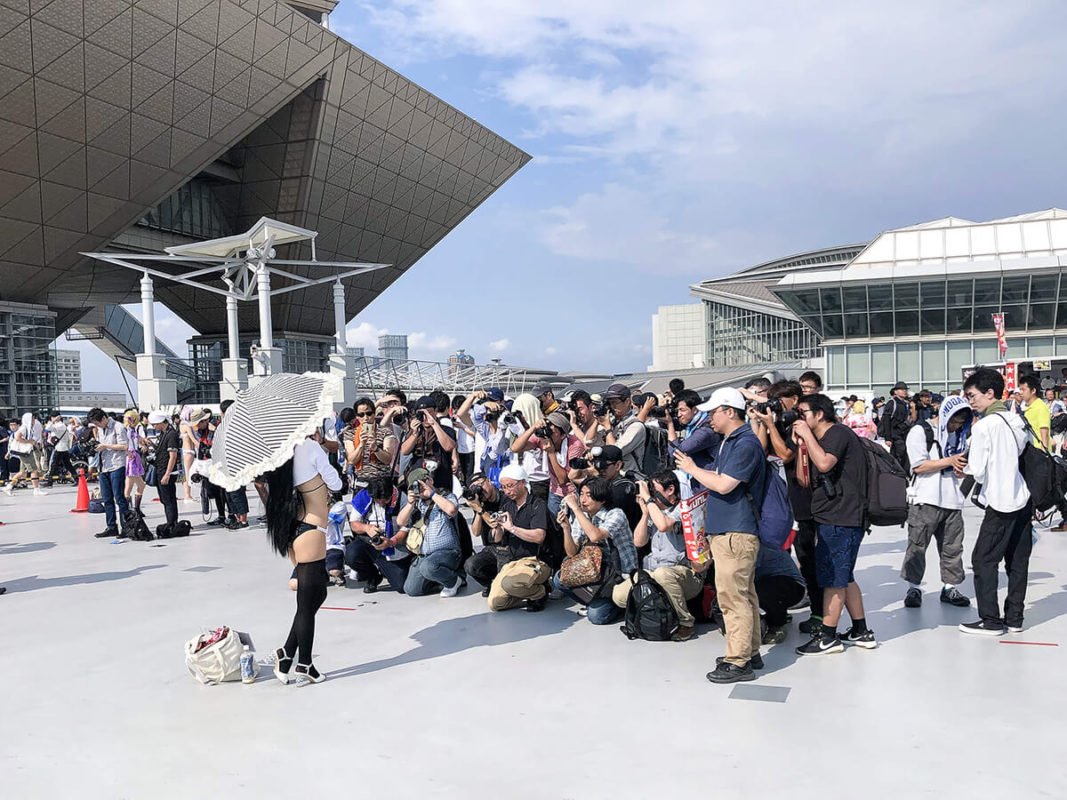 When walking up to the second floor, you will be greeted with lots of cosplayers, and even more photographers. 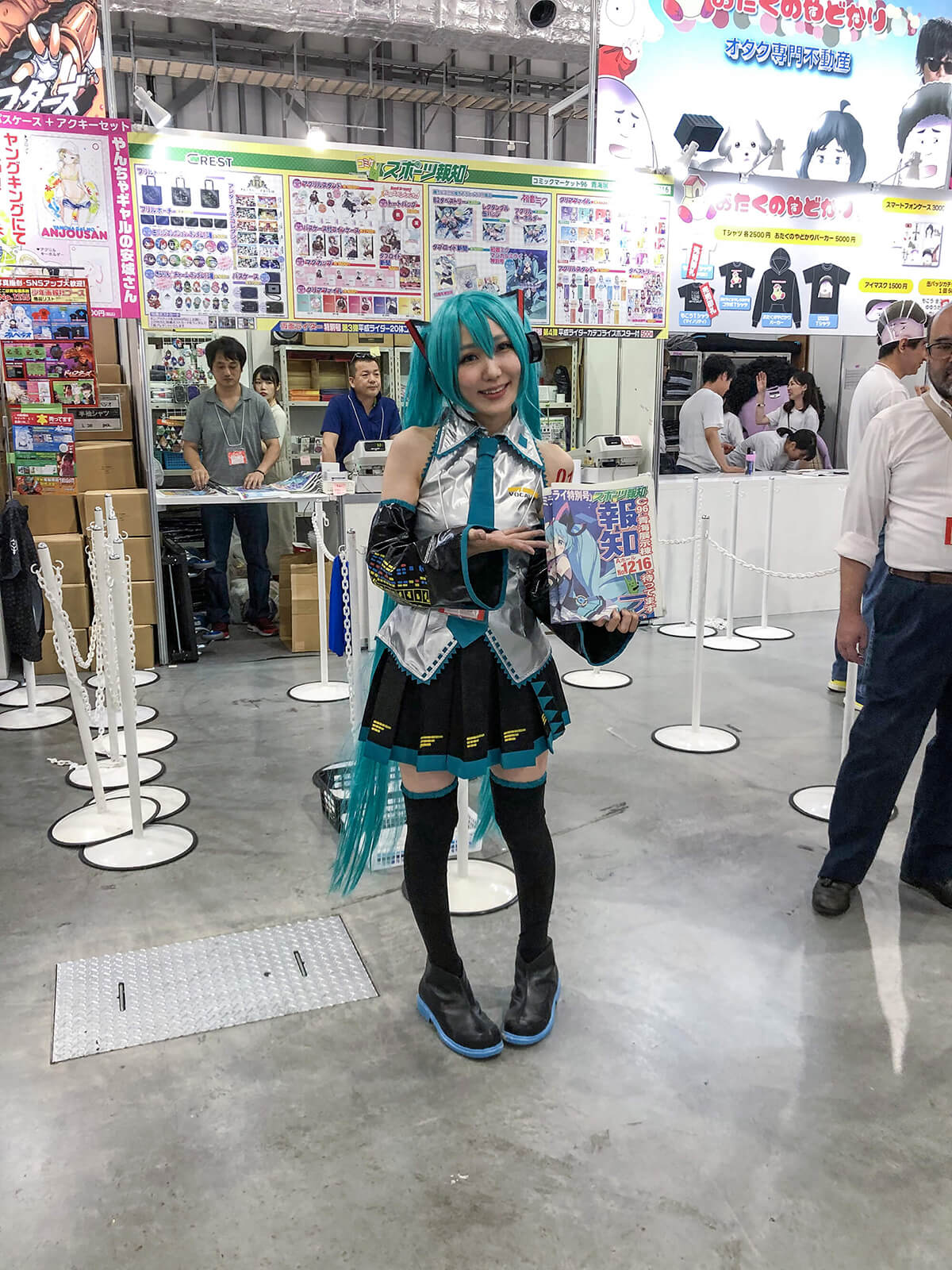 Before ending the day, we headed to the official booths (run by companies rather than individuals) which are located about 20 minutes of walk away from Tokyo Big Sight. We met this lovely Hatsune Miku cosplayer who was handing out Hatsune Miku papers to promote Magical Mirai 2019.

Usually, the official booths are not this far away from the main area, but due to constructions related to the 2020 Olympics and other safety reasons, Tokyo Big Sight was constrained in size. Resulting in fewer booth space available and causing the official booths having to relocate. To compensate, Comiket added the fourth day to their schedule for the first time in history. 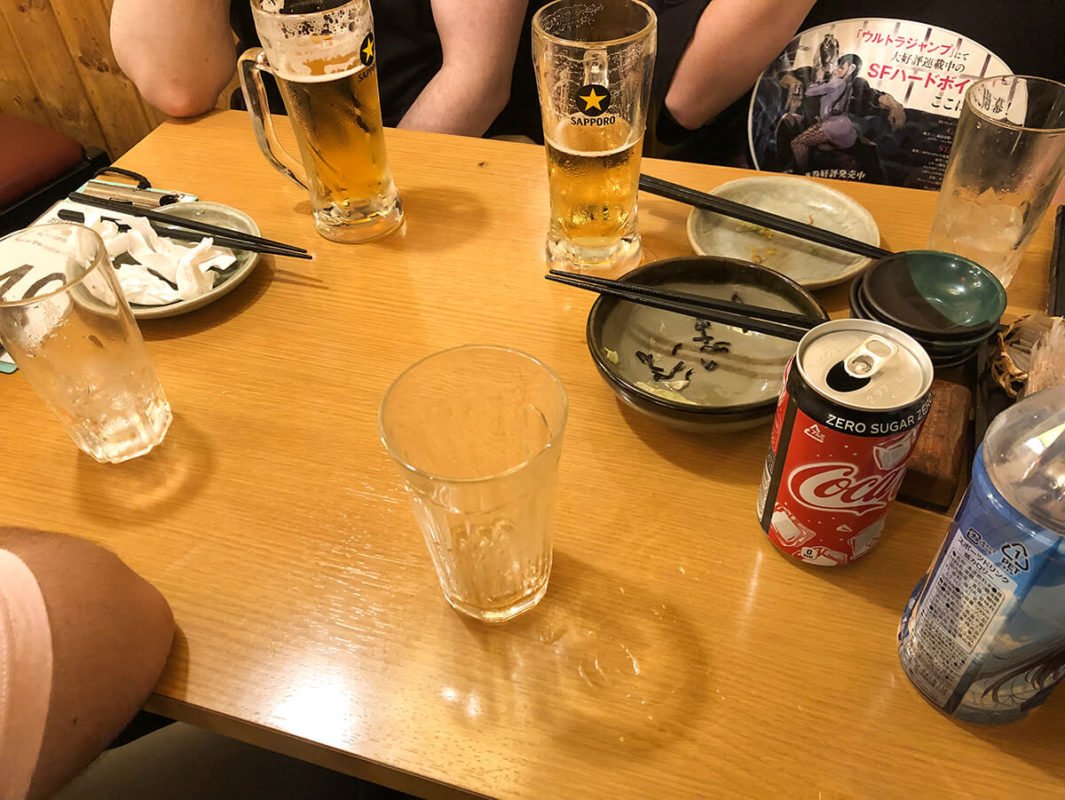 Bringing the day to the end, we, the JROCK NEWS team headed to an izakaya to officially end the joyful but exhausting journey. 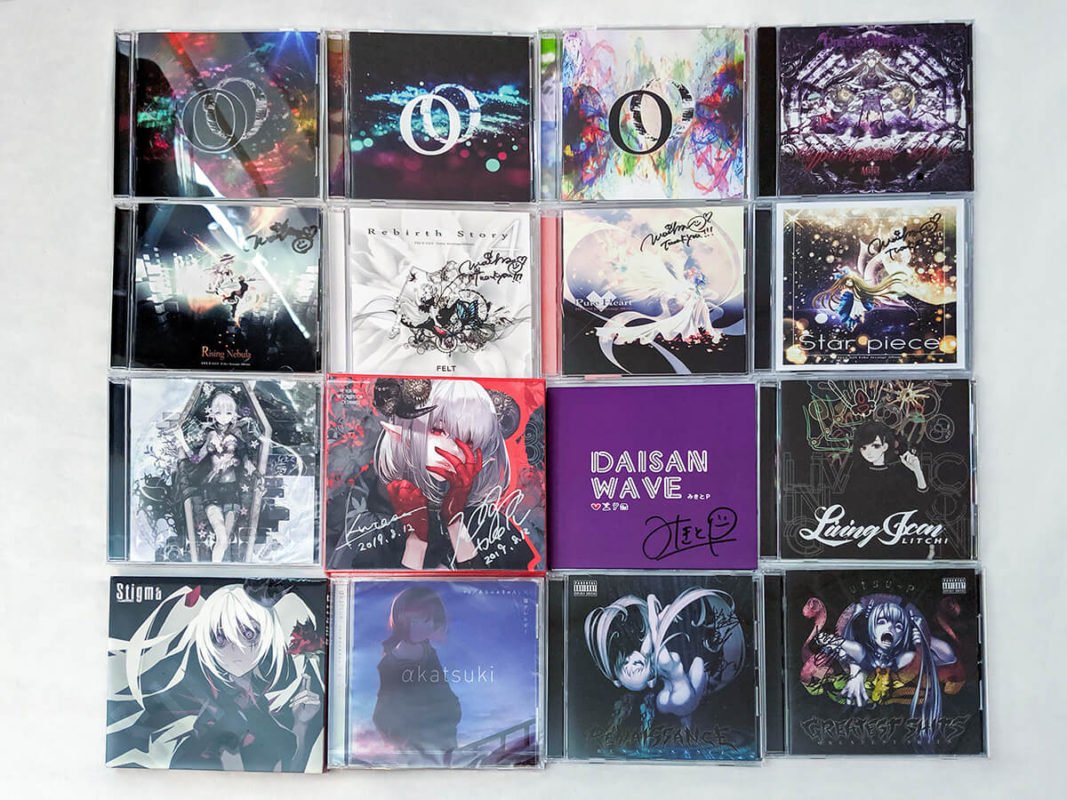 Unfortunately, I wasn’t able to buy all the albums that I wanted due to time constraint, but I did manage to get many of them!

In spite of the heat, long queues, and the sheer number of people you will have to “compete” with, Comiket is definitely an event I recommend!

Even if you’re not interested in a specific doujin circle, chances are that you will be able to find fan-creations of your favorite anime or manga. You’re also able to see your favorite characters come to life thanks to the top-notch cosplayers around the area. The whole experience in itself, being able to rendezvous with literally thousands of people with similar interest is just amazing.

If you’re interested in attending, I suggest keeping yourself informed via Comiket’s official Facebook page which is all in English.