Zin (ジン) is back with not one but three consecutive singles! The first one, Yamikare (病ミ彼レ), came out on May 18. The next one, Kakumei Shojo A (革命少女A), will be released on June 22 and the third single on July 13!

The band held their live Kaihouku (開放区) at OSAKA MUSE on May 25. Zin also scheduled three two-man lives Zin VS Kansai bands (ジン VS 関西バンド) at Osaka LIVE HOUSE D’. They started with FoLLoW on May 19 and will be on stage with SHIVA on June 23 and another Kansai band (to be announced) on July 14.

Check out the music video for Yamikare above, which was uploaded about a week ago. The kimono-insprired outfits and catchy shamisen are present again! Also, the preview of the next single Kakumei Shojo A as well as the band’s new look can be found below. 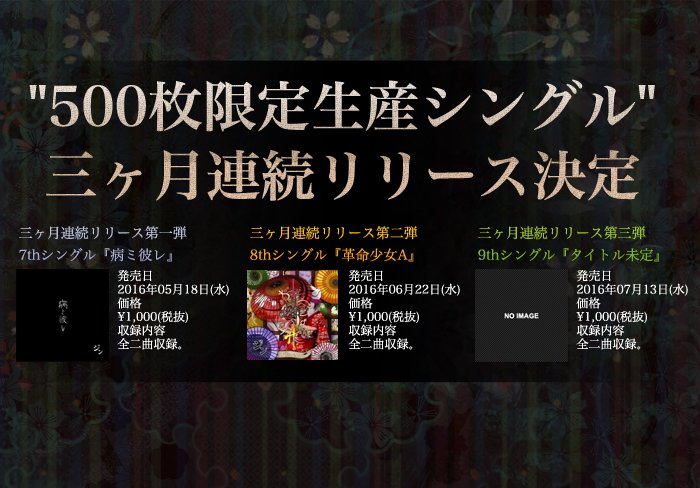 As shown on Zin’s official website, these three singles are extremely limited. There are only 500 copies available each, so make sure to pre-order the upcoming singles as long as they are still available!

Title to be announced