Messgram will be holding their very first live concert outside Korea on August 14 and 22 in Europe! And the lucky winners who are given the chance to see them perform in Europe, are the fans in Hungary, Budapest! The live concert is held in association with the “Korean Rockwave Night’ 15 ” that takes place in Dürer Kert, along with three other bands: Naty, GBSG and InCorrect as special guest.

The band encourages fans to visit their Facebook page for more information. 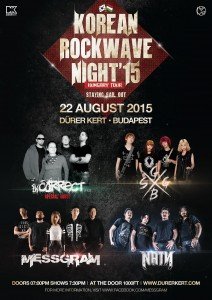