This interview was originally published by “club Zy.” in Japanese. JROCK NEWS is partnering with club Zy. with the aim to popularize Japanese visual kei globally. Learn more about our partnership here.

HIZAKI, the combination of a guitarist with outstanding potential and a beautiful appearance, brings forth his solid yet charming worldview. In addition to Versailles, and Jupiter, he is also producing his own solo work. All of these projects have built his overwhelming great reputation. Mesmerizing a large number of listeners and with a name internationally known, we approached the artist HIZAKI and asked him about his past, present, and future. 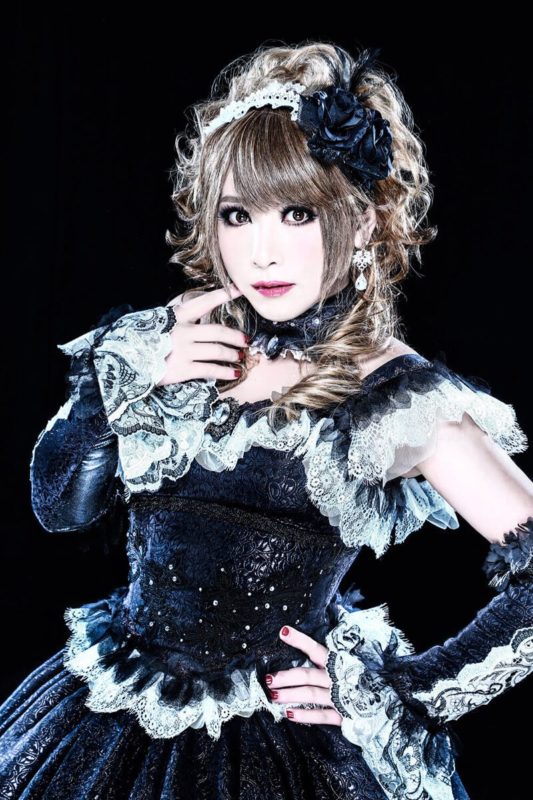 “I was all alone. When you are a sixth-grade elementary school student, no one around you listens to rock or plays guitar.” —HIZAKI

At what point in life did you discover music and rock?

HIZAKI: I already liked classical music when I was in kindergarten. We didn’t often listen to classical music at home, but I loved it whenever I came by that kind of music on TV for example. I especially loved the sound of the violin, but when I told my parents I wanted to play the violin or even the piano, they simply refused and didn’t let me learn. Later, when I was in sixth-grade in elementary school, my older brother started learning guitar. I dove into music right after having tried playing his guitar for the first time.

Sixth grade in elementary school [around the age of 11–12] is quite early, isn’t it? Although, I can definitely relate to your desire to play an instrument.

HIZAKI:  I always had the desire to learn violin or piano, and in kindergarten or elementary school you have the chance to actually try instruments in music class, right? Instruments like the organ, the recorder, those kinds of instruments. It was really fun so I started wanting to try the guitar. However, no matter which instrument I played, I hated playing someone else’s song. The moment I realized this, I began wanting to create my own songs. I don’t really know why, but I hated playing other people’s music.

HIZAKI: Yes, I did. Before playing guitar, I already liked LOUDNESS, and X Japan for example, but as a beginner, they were too difficult to cover, right? I didn’t really have an interest in playing the rhythm guitar because I really wanted to play lead guitar, so it was definitely impossible for me at that time. As such, I created my own exercises. Unlike those days, you can now easily find exercise materials like phrases on the Internet, but back then, that kind of information was harder to find. I grew up in the countryside in Shiga prefecture and there weren’t many practice books or music magazines to pick up. My only option was to come up with these things myself.

You created phrases to practice all by yourself, which was actually your first contact with composing music? Does that mean you were already thinking about guitar riffs and chord progression since the very beginning?

HIZAKI: Yes. I especially loved thinking about the melody, so I’ve been creating melodies since then.

Oh! We can easily say that you were an early bloomer, musically speaking.

HIZAKI: But on the other hand, I was all alone. When you are a sixth-grader in elementary school, no one in your environment listens to rock or plays guitar. Then, I entered middle school which is when I really got into guitar and practiced like crazy. Eventually, some people around me started playing instruments as well, but no one was at a level high enough to play with me. I was always all alone.

Even by making compromises, you didn’t have the chance to start a band with your friends?

HIZAKI: I didn’t. My friends used to come to see me playing guitar, they were like “This guy is truly amazing!” [laughs]. When I entered high school, we were in the middle of the “band boom”-era and a lot of people were playing instruments, and got the opportunity to join a band. But a band has to be composed of members having a similar level right? I had to accommodate myself—to lower my skill level—in order to fit in.

Also, punk and grunge music was very popular at that time, and more technical music was considered old fashioned—outdated. Guitar solos included. Also, I always had an interest in metal, visual kei, etc. and it never wavered. In short, I loved technical and violent music, but my friends were more into punk or grunge music. Even if I was a part of a band, I had no fun at all, so my life as a high school student was quite gloomy.

I understand that pain as well. I’m glad that these experiences didn’t kill your passion for music.

HIZAKI: To be honest, I sometimes asked myself if it wouldn’t be better to stop. But after I graduated from high school, I went to Kyoto’s live houses and approached the city’s music scene, composed of some very talented musicians. At last, I met people who had the level I was always looking for, and the visual kei scene of Kyoto had a lot of people who were into metal as well. When I realized this, my motivation returned and I had the desire to give music another chance.

I started a visual kei band in Kyoto with my senior from my hometown and the people he was playing with. It was my first time in a visual kei band, but since I was already used to wearing makeup during shows in high school, I didn’t feel uncomfortable at all, and I smoothly entered this world.

I see. So your personal style already emerged in your teens.

HIZAKI: From that time and until now, my style didn’t change the slightest [laughs]. Since high school, I am always wearing makeup and skirts during shows.

“They have their own style as performers. I liked that kind of player.” —HIZAKI

HIZAKI, you definitely have your own style and character, but because you wear skirts and makeup, have you ever worried that you wouldn’t be judged fairly as a guitarist?

HIZAKI: Never. As far as I can remember, I always loved that kind of thing. If I look back at my photos from kindergarten, I noticed my parents put me in red clothes a lot… I’m not sure what they were doing when they raised me [laughs]. But if I wore that, it means I didn’t object. In high school, I was totally not opposed to doing my makeup or wearing skirts either. I always thought about how I could stand out on stage, and eventually, my conclusion was to look like a girl.

But maybe you could say that more than the image you created through your character, it’s your skill as a guitarist that really made you stand out.

HIZAKI: Who knows. Inside me, I was simply thinking that it would be better if I looked intriguing [laughs]. It has no added value, but as a guitarist, you have to do something extra or you won’t be noticed. Ever since I started learning guitar, I thought that simply knowing how to play is not enough, you also have to be good-looking, or put on a great performance, or it won’t work.

That’s right, indeed. There are many talented guitarists in the world, but no matter how good they are, if they’re stiff as a board and only gaze downwards at their guitar, we would get bored. Guitarists who combine excellent technical skills and showmanship are called guitar heroes.

HIZAKI: Exactly. I like visual kei, but I also liked metal. If we think about it, Yngwie Malmsteen or Zakk Wylde aren’t just playing, their looks and the way they perform are amazing. They have their own style as performers. I liked that type of player, and I wanted to be like them. Since I enjoyed looking androgynous or even glamorous, I decided to turn this into a strength. Since the very beginning, I never thought about wearing T-shirts or jeans during shows. I’m not bad-mouthing people who do so of course, I simply thought that it wasn’t me.

There are many guitar players like this nowadays. Even musicians who aren’t related to visual kei have particular clothes or set their hair nicely for their shows, it motivates them. A lot of people say they enjoy it.

HIZAKI: I think so too. In my case, when I say it’s troublesome, I assure you it is [laughs]. Well, nowadays it’s easier since my makeup skills increased over time, but at first it was really difficult. At that time, I was already curling my hair you know, but you’re sweating so much during shows that I needed to literally freeze them with hair spray so my curls wouldn’t collapse. I used to go through one can of hairspray per show. My hair was so stiff that even after shows, it was still in perfect shape, so sometimes I went drinking like that [laughs]. I looked quite flamboyant… more so than any girl [laughs].

That’s amazing [laughs]. After you stood out as a guitarist in Kyoto, you created Versailles, would you tell us more about it?

HIZAKI: I joined Versailles after I came to Tokyo. It was actually pretty late since I was around 27 years old. Until then, I mostly played in Kyoto and Osaka, but I had the feeling that there was nothing more to do in that area so I decided to go to Tokyo and give it a shot. It was only a simple reason like that which got me to move to Tokyo [laughs]. After that, I suddenly received a call from KAMIJO who told me he was looking to start a band with twin guitars, and he asked me if I would join him in this.

HIZAKI: We were not so far from each other and I think we played in a session band or something together. Anyway, despite his kind offer, my reaction was something like “No, I’m afraid it won’t be possible” [laughs]. I was already playing in a band back then which KAMIJO knew, so I could only think “Why did he invite me…”.

Time passed and after a series of events, I ended up playing guitar for the breakup show of KAMIJO’s band. After the show, he asked me again to create a new band with him. By then, I wasn’t playing in a band but I had my own solo project, so I decided to join Versailles while continuing my own activities.

As expected by the “truly amazing guy” [as you’ve been called by your classmate] couldn’t stay hidden forever in this world. When did you start your solo work?

HIZAKI: Around 15 years ago, I guess? Some labels wanted to recruit me, and at first, I used a guest singer as a vocalist. All of this happened before Versailles. It’s a solo project but as a band, with members. When it comes to the recording, it is just me and the singer though. Leading my own solo work is really fun and I get a sense of fulfillment from it.

We’ll continue the interesting story of HIZAKI’s origin next week where we’ll find out more about Versailles, Jupiter, and HIZAKI grace project. What is it like working on three projects at the same time, and what makes each of them stand out on their own? Follow us on Facebook, Twitter, or Instagram to keep updated!