This interview was originally published by “club Zy.” in Japanese. JROCK NEWS is partnering with club Zy. with the aim to popularize Japanese visual kei globally. Learn more about our partnership here.

At Izakaya HAKUEI, the successful nico radio live broadcast, Aoi from the band the GazettE made a special appearance as a guest for the January 28 show. As expected, it seems alcohol flowed freely, but HAKUEI and Aoi have been summoned by “club Zy.” before the program started. Planning for some (perhaps) serious discussions. We were wondering what kind of conversation those two cool guys could have… So we broke into the izakaya, in the middle of their chat [laugh]! Let see what kind of topics popped out of it, in a relaxed and cheerful atmosphere. 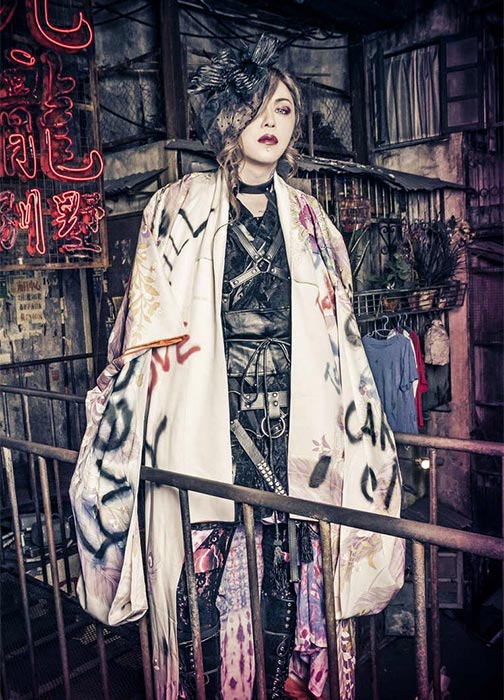 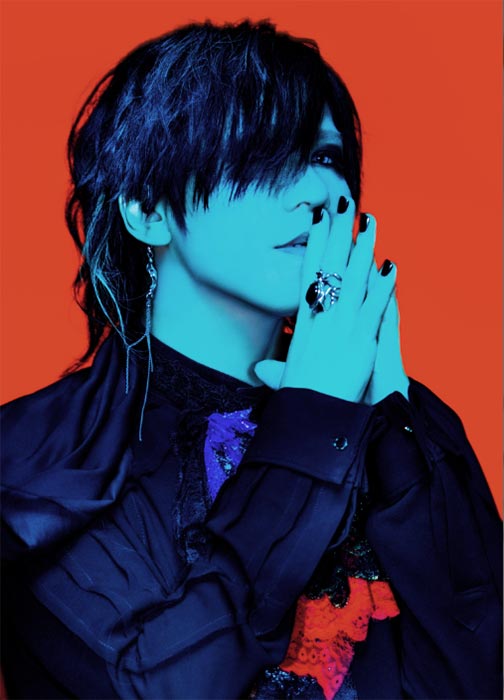 Aoi of the GazettE

“Drinking with Aoi is quite rare.” —HAKUEI

So HAKUEI, you usually broadcast “Izakaya HAKUEI” while drinking, but now we’re here, chatting before the program… What do we do now? [Laughs]

HAKUEI: That is a tough question… It’s a bit early for drinking, right? [Laughs] If we start drinking now, we’ll be fairly drunk when the program begins [laughs]. Well, that could be fun [sarcastic laughs].

I leave it to you, then!

It’s about moistening our throats a little bit, isn’t it?

HAKUEI: That’s right. A highball for you, Aoi?

Do you two usually go out drinking together?

HAKUEI: We don’t really plan when going out for drinks. We’ve only done it once, probably??

HAKUEI: Well, in the first place I’m not the kind of person who plans ahead when going for drinks. Recently, if I agree to hang out with someone, it’s more likely to be food.

That’s very mature of you!

HAKUEI: And then, if we feel like the meal ended quite early, we would move to another place for a drink or something, and then we would meet up with some people, and so on. This is my regular pattern. So I definitely think that Aoi and I planned to hang out only once in the past. In my heart, he’s like a rare character to me.

And for what occasion did you plan to meet at that time?

HAKUEI: We went to the show of an acquaintance, so we thought we could have a meal after. Kiryuin Sho (Golden Bomber) was there as well, wasn’t he? I wouldn’t say I often go drinking with him, but I feel like I’ve been drinking with Aoi more! [Laughs]

You’re talking about vocalists, but we don’t really have the image of singers going from bars to bars, you’re kind of extroverted HAKUEI!

HAKUEI: We often hear about bassists or drummers meeting up, but never about vocalists… Or maybe it’s just that people hate me so I’m never invited [bitter laughs]? Talking about vocalists, Kiryuin Sho, Shindy (Anli Pollicino), and I are in the same agency so sometimes we hang out together, but that’s maybe only a few times a year.

There’s also Ryuji Sato (the singer of The Brow Beat, a band produced by HAKUEI), we’re often in the studio together during recording, so when we’re done we usually end the day with a meal, but it’s more the natural flow of our day. So yeah, drinking with Aoi is really rare. Well, sometimes Hoshiko calls us, so we meet through him.

Aoi: Well, I respond to his invitation once every three times so… [Laughs]

What makes it enjoyable to drink with Aoi?

HAKUEI: To say it simply, I am interested in him.

HAKUEI: the GazettE leads a proudly independent existence in the music scene. This is what I have an interest in. But I don’t want to be stuck to Aoi like glue. I’m happy when we have the chance to meet or talk, but… We just don’t talk about music when we have a drink. [Laughs]

So, what do you talk about?

HAKUEI: Definitely not! But sometimes we talk about how the industry will evolve or things we would like to see in the visual kei scene.

HAKUEI: I feel that the old days were very chaotic and confusing, if I think about it now. Various scenes were born, and at this time the music environment shifted from analog to digital. In terms of recording, at first, it was on open-reel—a recorder deck where the tape on the reel was exposed. Editing was done by hand, too. Actually, the word “visual kei” didn’t even exist when we formed PENICILLIN. And before we knew it, it was like “What? So, we’re a visual kei band?”.

HAKUEI: At first I wondered, “What the hell is visual kei?” [bitter laughs]. But shortly before PENICILLIN, there were already some monster bands like LUNA SEA  or L’Arc-en-Ciel. And at the same time as us, GLAY, and SIAM SHADE came out of nowhere. There was such energy at the time; everyone was shining and there wasn’t a sense of any kind of brotherhood. Of course we weren’t fighting each other, but there was a sort of tension.

There were already shows where you played together, but indeed I feel like there wasn’t any kind of harmony.

HAKUEI: Of course, there were shows we played together during the indies era. For events, company bosses came telling us “Alright, this event has been decided”, just like that. There were also many events related to magazines at that time.

Aoi, when visual kei became famous, were you already into it?

Aoi: Absolutely not, I didn’t read magazines or such, so my only source of information was TV. I discovered visual kei by watching TV then.

HAKUEI: Hm… Indeed, there wasn’t much distribution compared to nowadays. Television, or even radio for some, were the most common sources of information.

Aoi: It was that kind of period. When I was a kid, X Japan was a shock to me. I grew up in the countryside so there wasn’t a lot of information, not many magazines either. So definitely in those days, maybe the term “visual kei” didn’t exist.

HAKUEI: When I was a high school student, I didn’t even think the magazine “SHOXX” was around. There were music magazines like “PATi・PATi” or “B-PASS”, visual kei wasn’t a thing but bands like BUCK-TICK or UP-BEAT were on the covers. I remember reading those kinds of magazines with my friends.

Aoi: There was also the magazine “Bando yarou ze!” (Let’s start a band!).

HAKUEI: Oh yeah, there was!

Aoi: I even think if there might have been some LUNA SEA scores in it.

And of course, you played guitar covers of them?

Aoi: Actually no, at first I was really into X Japan. With time, I felt like LUNA SEA’s guitar phrases were a bit more “unique” [bitter laughs].

HAKUEI: Ah, it’s true that this twin guitar style was very uncommon until then.

By the way Aoi, were you aware of PENICILLIN at that time?

Aoi: Yes! I saw them on TV! They were so beautiful… And nothing has changed, even today! They were extremely popular…

HAKUEI: We are totally ordinary!

HAKUEI: No, I mean really. Especially from our debut until we appeared on TV, we were damn busy…

Aoi: Thanks! Let’s make this year a good one, too! [Toast]

While you were very busy, coverage probably increased, right?

HAKUEI: There was so much, yes, long ago! During a single day, so many writers were coming by, taking pictures for each magazine and not necessarily for front covers.

Aoi: For us as well, they often took pictures for news coverage. We got up early in the morning to go to the office, and went back home late at night.

At that time, you spent a lot of time with other members in comparison to now, didn’t you? Speaking about that, did PENICILLIN members ever live together, or anything similar to that?

HAKUEI: No we didn’t, however when we were students we lived close to each other so we often went to each other’s place. For example, when we passed by a member’s place, we just had to knock on the door and if he was home, we would have a drink or something.

Before we formed PENICILLIN, Chisato and I played in a band with our seniors at university, but it was a mess. And one day, when I was on my way back from university, I bought a yakiniku bento and went to Chisato’s place. When I arrived, he made some hot tea and while we were eating and drinking, we thought about quitting that band.

We considered asking GISHO and O-JIRO to make a band together. What surprised us is, despite GISHO being a singer, he said he would play bass for us, and O-JIRO, who was a bassist, would play drums. It was kind of like, what the hell is going on [bitter laughs]?

HAKUEI: But we know both of them were nice guys and we got on well with GISHO so while eating that yakiniku bento, we just said: “Let’s do it”. [Laughs]

And the result is a very long-lasting band, isn’t it?

Aoi: We didn’t have that kind of episode with the GazettE!

Aoi: For us, it was more like we picked up members via bands we performed with. Kind of like how it is now.

HAKUEI: Is that so? We were all students, so this explains that. [Laughs]

Such rich band history! Well, forming a band with close friends or classmates was quite a common thing. When you look back at when you formed your bands, how do you feel about it now?

Aoi: It was definitely trial and error [bitter laughs]. In terms of our visuals, we tried adopting the oshare kei style, which was very popular at that time… Terrible mistake [laughs]. But when I visit my parents’ home, pictures of this era are still displayed. They are even put in order, from oldest to most recent

HAKUEI: They are in my parents’ home as well, posters of our debut, etc. But some have been taken down too [laughs].

I hope they are being looked after carefully! We heard a lot of important things about HAKUEI. In that regard, Aoi, do you have any questions for HAKUEI?

Aoi: Alright HAKUEI, you like mangas right? What are some recent titles you think are interesting?

HAKUEI: Recently, maybe you don’t know it but, the standout for me is “Chainsaw Man“, it sells incredibly well and it’s published in the Shonen Jump magazine.

Aoi: Huh! What kind of manga is it?

HAKUEI: It’s a manga written by Tatsuki Fujimoto, in which demons exist. There are many demons, like tomato-demon, snake-demon, and so on. Their strength depends on the nature of those demons. The most powerful one is the handgun-demon, so powerful that tens of thousands people who had the misfortune to cross his path died.

HAKUEI: Yeah it’s really crazy [laughs]. And then, there is this cute chainsaw-demon. When the main character, a devil hunter named Denji, died, the chainsaw-demon entered his body and brought him back to life. It’s too short an explanation, but anyway you really should read it! I don’t want to spoil it so I didn’t talk about the most interesting parts! This work is a monster of emotions, it’s really touching.

The second part of the installment is now available here. HAKUEI reveals how he stays in shape and Aoi talks about his hypothetical grimy bar. Follow us on Facebook, Twitter, or Instagram to stay up to date.