At the packed-out concert on August 24, GRANRODEO was performing on the stage at Zepp DiverCity in Tokyo, a venue with a capacity of 2500, located right next to the 20-meter tall mecha Gundam statue. Not only was this show full-house, but the entire tour had all of its tickets completely sold-out!

The mad demand for the duo-unit GRANRODEO was very apparent by the reaction of the crowd during the entire performance. For someone who never attended their concerts in the past, I was pleasantly surprised by the fan enthusiasm and immense popularity this unit has gained over the years of creating anime songs (anisong). You will find their work appearing on popular series such as Kuroko no Basket, Mobile Suit Gundam: Iron-Blooded Orphans, and recently on Bungou Stray Dogs with the single Setsuna no Ai.

Before we continue, I want to remind you that JROCK NEWS has an interview with the duo talking about the latest album FAB LOVE which you should definitely check out too!

Vocalist KISHOW and guitarist e-ZUKA were joined on stage by two support members who played bass and drums. The support members helped energize the concert in their own respective ways, but the stars of the show that evening still remained to be KISHOW and e-ZUKA.

Every little move, gesture, eye contact had its purpose, and it was all to engage the fans to bring out every little drop of energy. 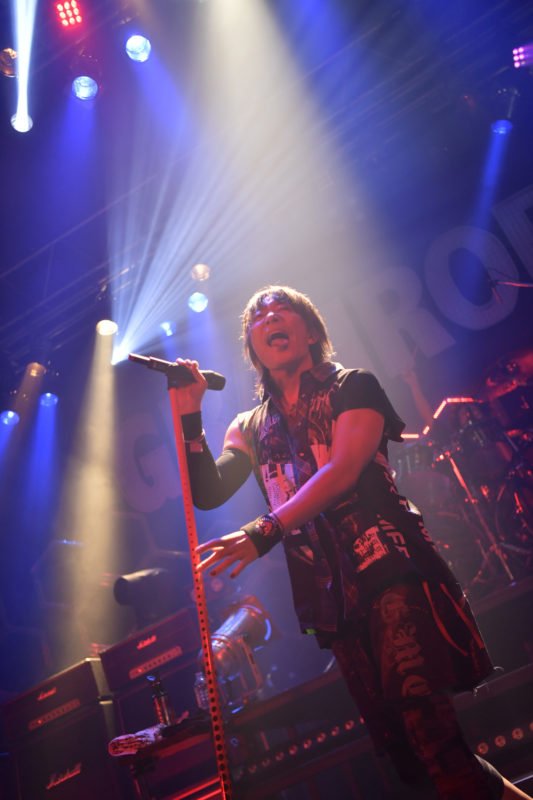 Unlike other concerts where you typically would see people at the back being less enthusiastic, this duo broke the spell and was able to capture everyone and get them moving, even the people on the second-floor balcony—which by the way was fully packed too! With such loyal fans, it is no wonder why their tour was sold-out.

A stage move by KISHOW that stood out would definitely be his big split jump where he spread his legs in the air like wings. Or when he danced with his microphone stand and put it behind his back as if it was a baseball bat.

As for e-ZUKA, despite holding a guitar, he effortlessly jumped around while doing cool rock moves and even spun his guitar for a full rotation around his neck. He does this while timing and playing every chord and note perfectly, so there’s never a compromise between entertaining the fans and playing the songs.

The duo had great chemistry on stage and was incredibly smooth and flexible which clearly revealed how experienced and confident they were after many years of performing. At some point during the five MCs, the gig almost felt like a comedy show where the members cracked jokes non-stop.

When e-ZUKA was holding one of the MCs, a fan yelled: “Kawaii” (“You’re cute”), he hilariously responded:

No one ever called me that, at least not since I was 5 years old.

He even gave some fan service to the English speakers at the venue:

[In English] Thank you for having us. You guys are awesome! [In Japanese] Why am I speaking English, maybe it’s because it sounds cool?

Being an anisong unit, they of course had to play some notable songs, such as Setsuna no Ai from Bungou Stray Dogs, and Can Do from Kuroko no Basket. Once the song BEASTFUL: the opening theme song of the shounen anime Baki was on, the performance basically turned into a metal concert with its heavy sound and thrilling light show. e-ZUKA appropriately switched to a V-shaped guitar during this song to crank up the metal sound. The fans responded with both fist-pumping and plenty of headbanging!

Although, the band could on a whim turn the show into a summer beach party with songs like Endless Summer, or disco with Jump And Pump. The fans didn’t hesitate at all whether it was headbanging or dancing and jumping. Whatever the duo threw at the crowd, they responded with love and appreciation.

Without a doubt, GRANRODEO is a show that will completely drain your energy and in return, grant you a full dose of organic endorphins! The setlist offered fun and engaging songs on top of the spectacular engaging performance provided by the duo-unit. Their chemistry on stage can’t be faked, and the love for their fans is just as genuine. Make sure to see these guys if you ever get the chance to!