Can you please introduce yourself and tell us a surprising or quirky fact about yourself.
Hello JROCK NEWS readers. I am Yosh, the singer of Survive Said The Prophet and SawanoHiroyuki[nZk]. Music has been my thing ever since I can remember, but some interesting facts would be that I use to take wrestling very seriously. Won some championships in high school. I think I’ve still got a picture of me up in the gym somewhere for winning something.

Oh wow, that’s impressive and unexpected! So what bands did you listen to at that time, and how did it progress?
Being young, I listened to loud music, which led to louder music. I got into pop-punk/alternative punk—whatever you wanna call it—at an early age, so anywhere from MxPx, The Offspring, Blink182 etc. Then I shifted towards emo/screamo, like The Used, Story of the Year, Funeral For a Friend. But after that, I guess my music went everywhere.

Your vocals are very impressionable, not only on your Japanese fans but on international listeners too. Is that a natural progression resulting from Survive Said The Prophet’s (SSTP) sound in general, or has it been an aim of yours to project more of a Western vibe vocally?
Nope, I think it’s just the way I grew up. Just a little different. [laugh] But I guess every artist has their own background too, but I’m glad people are catching the differences.

You just released your album WABI SABI earlier this month under SSTP, we had a listen to it and really enjoyed it! Is there a certain theme or storyline attached to it?
Glad to hear you enjoyed the album. We definitely had a blast writing it. Wabi-sabi is a concept that came to mind before we officially started recording. It’s an idea that does not have a clear guideline or definition, but Yudai—our bassist—said it best. “Anything can be wabi-sabi”. The imperfections are what makes music that much better. We go to shows even when we have awesome speakers and earphones accessible to us. I like to think that as long as human beings keep playing music, the imperfections in the performance drives our emotions that much further. So we went with the idea “wabi-sabi”.

Is that the reason why so many of the lyrics in the album seem to be self-reflective? If so, was this out your own experience or something you have observed in other people’s lives?
This record is a little of both, but it wasn’t as personal as the last record FIXED because of the general theme of the record.

How does WABI SABI differ compared to FIXED or other previous SSTP releases?
I think the easiest way of explaining WABI SABI compared to other records is that this record is FIXED on steroids. [big laughter]

In general, the album has a very soothing sound, but in the song Lost in Time, there is a really interesting contrast once Kenta Koie’s (vocalist of Crossfaith) screams hit in. What was the reason behind the inclusion of the screaming part?
We always had screaming in our songs… So I guess it’s nothing new for us. [laugh] But having Koie scream for the song was definitely exciting. I told him I heard his voice [in my head] on this specific part of the song while I was making the demo. He listened to the song and agreed right away! 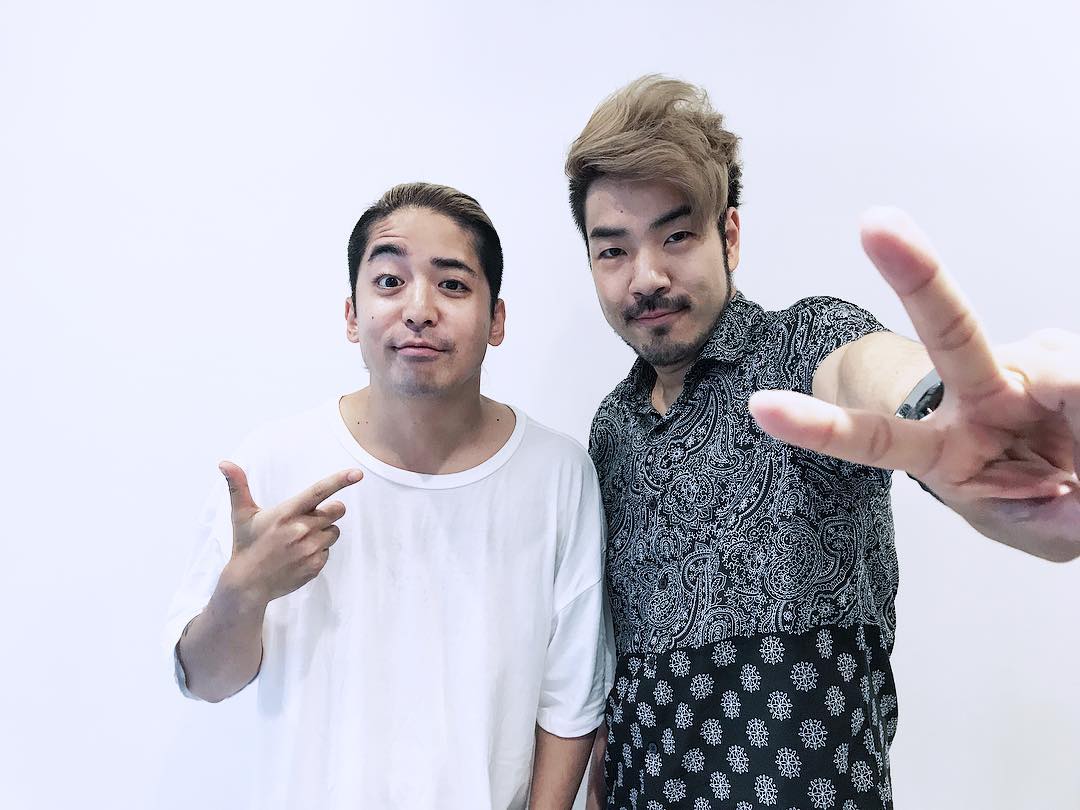 Yosh (left) and Koie of Crossfaith (right) posing for the camera.

As you mentioned in the beginning, you have also been working with Sawano Hiroyuki for a while. You’ve been featured in many of his work, one of them being the Attack on Titan Season 2 soundtrack and now you’re taking part in his upcoming album 2V-ALK. Would you mind telling us how it was working with Sawano during the recording of this album?
It’s always an honor working with that man no matter what type of song it is. I mean, I’m a fan of the anime Attack on Titan, but didn’t foresee myself singing the song for the anime in his next record. I don’t know if this is on purpose or not, but he seems to raise the key of the song higher and higher than what I am used to. So he really pushes me to sing better and open up to new singing styles. I am very grateful for his love and support.

How did you get in touch with Sawano in the first place? And were you a fan of his work from before?
I was a fan of Aimer, which led me to listen to some of his other tracks. He was looking for a rock singer and one thing led to another. My manager got a call, and suddenly I was in the studio recording a song [for Sawano called scaPEGoat] for the anime Seraph of The End.

Besides Sawano, you have also previously worked with some great bands such as Crystal Lake and BEFORE MY LIFE FAILS. Do you feel that such projects have contributed to your growth as a musician?
They are my mates. I’m always down to try singing on other peoples’ music. I think singing with bands is more for fun than anything else.

Any other acts would you want to collaborate with if the opportunity arises?
I would love to work with artists that sing in Japanese. Takahashi Yuu (a singer-songwriter who tends to write passionate acoustic songs) or Mr.Children (a Japanese pop-rock band well-known for their ballads) would be nice as well.

There has been a small concentration of Japanese bands in the last few years who have gotten their big break overseas, do you feel that this has changed the state of the scene in Japan for other bands wanting to do the same?
If nothing, it has given us knowledge. Like you said, “small concentration of Japanese bands” is the image people have outside, but a large percentage of the audience in Japan still purchase physical CDs and support music in and out of Japan, which helps the artists move forward across the ocean. I am proud of how Japan has tried to progress musically overseas without destroying its own culture, and as far as I know, this creates a bridge for both sides to share music. So I guess, to answer your question, I think it’s natural progression for us.

You are always sharing Instagram stories and uploading photos to your account. How important is it to stay in touch with fans in this day and age?
I have mixed feelings about it to be honest, but more importantly, we want to share our music with the world. If social network services (SNS) is a way to share it, then by all means, I think everyone should utilize the tools given to them to get their point across. Unfortunately, not everyone thinks the same, so I guess that’s the downside of SNS.

With so many projects you have going on, what do you like to do when you do find some quality leisure time?
Working on new stuff would be the answer to this question. [big laughter] I mean, music runs my life so if I’m not working for SSTP’s new stuff, I’m working on random projects with my mate Stephen Mcnair. I occasionally cook, and try to be a good Japanese citizen?

Before we head off, could you leave a message for our readers?
Hello JROCK NEWS readers. Thank you so much for stopping by and giving us a listen or a read. We released our new record WABI SABI and I hope you enjoy the new chapter of our musical journey!

We’re so happy that Yosh was able to take his time to enlighten us on his latest works! WABI SABI, which was released on August 2, is now available for purchase via the links below. You can also stream the album via Spotify or Apple Music.