The self-proclaimed most violent and brutal visual kei band, Deviloof, just recently released their first mini-album for your listening pleasure. Although PURGE released August 31, it took its sweet time finding its way to my American doorstep for review. Thanks to CDJapan, I was able to receive the album with with an autographed poster, signed with silver markers. Unfortunately, the poster is too large for me to scan. However, the poster is the same as the current band profile picture. Additionally, the poster contains information for their upcoming first one-man live called The farthest, at Shinsaibashi CLUB DROP on October 22. You can also look out for other exclusive offers at V STAR PROMOTION’s webshop. The current deal as of writing is getting Ishtar for free when ordering Ruin! Now, let’s move on to review PURGE.

Image featured on the signed poster via CDJapan pre-order bonus

To begin, let’s delve into this PURGE and see what it is all about. First off, I must admit that the album art for this release really grabs a person’s attention. Unlike Ruin, their first single, it is not just a title on a graphic background. PURGE features a man and a woman having pillars painfully being, well, purged, from their bodies in what can only be described as a graphic, bloody, and painful manner. It’s a great way to stand out from most visual kei bands. However, I feel that it is not unlike many western death metal and grind core albums. 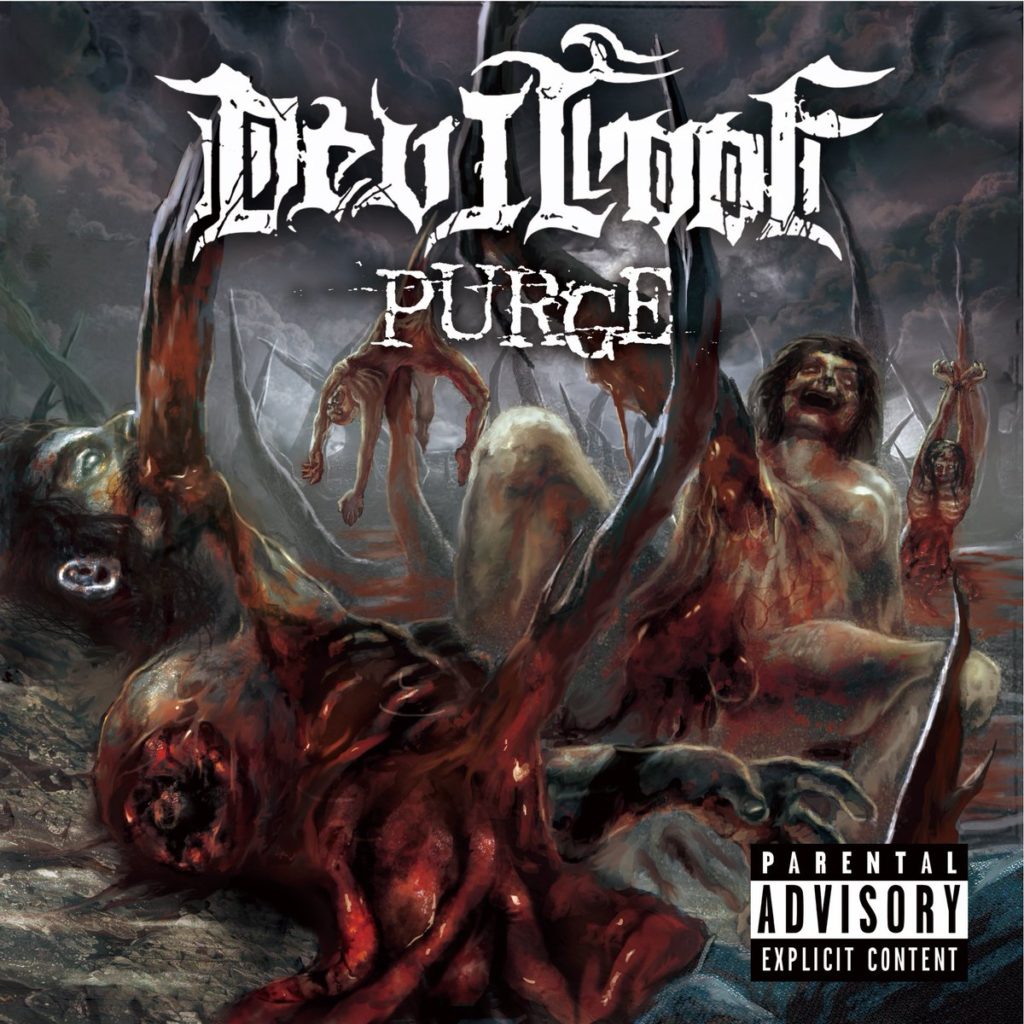 The CD cover of Deviloof’s PURGE.

On that note, the opening track to PURGE was a great surprise to me. Despite the snippet from the digest revealing what the track would sound like, I was not expecting something so different. From the first track it was almost as if this brand new band had already reinvented themselves. Gate of PURGE features some of the harshest most guttural vocals on the entire album. As a result, it is a fantastic way to start an album and set the listener up for a wild ride. No, not the type with a toad.

As the second track, A.M.D, begins, we are exposed to more of Keisuke’s absurdly deep and powerful vocals quickly followed by a pounding, continuous beat by the rest of the band that has an effect that makes your head start to move against your will. As the song reaches its midpoint, I wouldn’t expect too many people to be surprised by the fact that they are now moving in unison with the slowing rhythm that pounds harder and harder with each progression. The song finishes strong by picking up the pace yet again and leads into Doll Play.

Despite it’s strange title, suggesting that you’re going to have a good time remembering what it was like dressing up your old dolls, you’ll soon realize it is anything but. Stepping away from the more guttural vocals that are prominent throughout the album, Keisuke returns to the harsh raspy screams fans are more used to from their previous releases. It’s a great track on an equally great single. Think less dolls, more stabby stab stabbing.

On the subject of previous releases, Doll Play is followed by Ishtar. My first exposure to Deviloof was Ishtar. “I know you love me. You belong to me.” The use of these border-line yandere lyrics made me an instant Deviloof fan.

Before wrapping up the album with another old track, Deviloof provides yet another new song titled, get ready for it, syphillischancroidchlamydiaclervicitisporatozoaaids. Regardless, the intense tongue twister of a title is seriously the least of anyone’s worries. This track stands out from the rest due to the distorted guitar heard in the opening. Coupled with the deep growling vocals of Keisuke, the ominous tone prepares your ears for sweet aural assault. Luckily, if you don’t believe me on that one, you can have a listen, the band posted it back before the release of the album. It will also give you a better look into how their sound has changed in such a short amount of time.

Finally, Ruin, the only track for which Deviloof has made a music video for, has reappeared on PURGE. Aside from some vocal changes, Deviloof didn’t go and ruin Ruin on you. Ruin is just the way you remember it, with a new deeper variation on both instrumentation and vocals.

Despite still being in their beginning stages, it is very interesting to see that Deviloof already evolving their sound. On the other hand, it is also possible that they are still trying to find their sound. However you want to look at it, it is definitely true that Deviloof has potential. Hopefully, one day Deviloof will ascend the tower of bands hailing from the land of the rising sun. Only time will tell.

As for PURGE, I say you start clicking on links and buy this album. This band is not only fresh and in need of your support, but, they are damn good. Without a doubt, the style they play is not as popular as, say, ONE OK ROCK. or even the GazettE. Even so, this is who they are. For some people, who they are is good enough. I encourage those people to purchase this album if it is within their means. It’s not everyday that a band releases an album that just makes me want to bang my head and start breaking things. A man can only snap so many pencils before he has to move onto something larger.

Deviloof is violent, brutal, and anything else they say they are; they don’t play around, they compose music that will reflect on your inner hatred, rage, and desire to literally destroy everything in sight while screaming in your harshest voice. Furthermore, each and every track on this album is enjoyable to the last note. “I cannot get it out of my head“!

Here is the previously released digest to convince the non-believers or scare off the weak.