The physical version of HYDE’s vigorous yet dynamic LET IT OUT single released on November 25 which resulted in the upload of the related music video. Here the vocalist’s own brand of hooligans partakes in antisocial behavior by vandalizing a graffiti-covered car while he sings.

Said car is surrounded by masked figures using mallets and crowbars in hand to smash its exterior as HYDE sings while sitting on a settee. The guitar chugs accompany his piercing vocals before entering the anthemic chorus serving as the highlight of the song.

The warehouse-like set also lends itself well to what’s going on in the song from lights flashing at every angle to VHS camera footage capturing the vandals.

This rebellious vibe goes from strength to strength and it’s easy to imagine singing such a song at a concert. 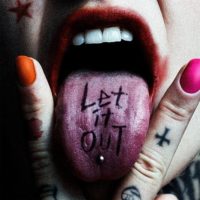