We did warn you that it was going to be a long wait for Hueye’s next release with the early announcement of the consecutive launch of their second and third single. Respite has been offered with the pre-release of two videos for the title tracks of each single, Anesthesia and Rousoku to Black Out. These two full-length music videos should provide enough entertainment for the remaining time before the release on October 2.

With the release of these two videos, the polar contrast between the two singles’ concept and sound is made apparent. Much like the previously provided tracklists which implied these contrarieties with their antonym names of; Kagyaku Koui meaning “sadism” and Higyaku Koui meaning “masochism”.

Their second single, Anesthesia, paves the way to a fast-paced rhythm but still a sound akin to Hueye’s first single Yasashiku Kuroshi. Outfit visuals provide an overwhelmingly white tone amongst the dim, dark, and grainy video concept, befitting the fast and thrashy sound of the song. This concept is an inverse to their third single, Rousoku to Black Out, in both sound and visual concept, with the song bringing down the pace to a smooth jazz percussion, yet still finds room to bring in a heavy and bouncy-jazz chorus. The visual concept here greets a darker style with the members going for a casual-smart attire matching well to the jazz tones.

The official artist photos for Hueye’s Anesthesia single have been released, but we’re still waiting upon photos for their Rousoku to Black Out single. Find the music videos and artist photos below for your enjoyment! 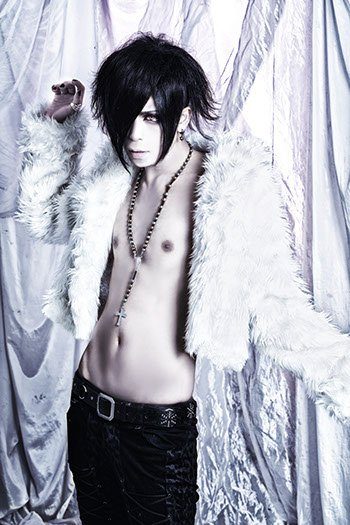