You are cordially invited on May 7 to the wedding of hard rock and prog metal by BRIDEAR with Bloody Bride. The third full album by the heavy metal band proposes a sonically aggressive celebration with you. Like a marriage ceremony that brings something old, something new, something borrowed, and something “bloody”. Notably, it has tunes that long-time fans will appreciate while also providing an open invitation for new audiences.

First up is Deep Blue, a short introductory piece that serves as a prelude for the arrangements to come. In particular, the debut track Daybreak best exemplifies the style of the band with speed and solid musicianship. Much like IGNITE, their popular hit from 2017, Daybreak is a good representation of “something old” per se. Yet, some compression in the mix keeps individual instruments from standing out.

Next coming down the aisle is the Bloody Bride. The heavy metal title track with haunting and dark mythos pummels into a progressive bridge where the presumed bride laughs at us. A normal groom would leave this bride at the alter, but we may be the kind of masochist to say “I do” just to get to the reception party!

Moreover, Dimensions electrifies with HARU’s strong contribution on bass, though this song is less memorable in comparison to other tracks. But at the midpoint, KESHIN arrives like a fighting spirit amidst breathtaking melody. Definitely helped along with standout guitar work from MISAKI and AYUMI. Plus, those who know the band’s earlier works will appreciate the return of KIMI’s growls.

Similarly, the follow-up Ashes, while at a slower pace by their standards, continues to carry on the party. Almost “something new” as a jazzy toe-tapper of heavy metal. Yet with The Moment trying to hold up the atmosphere, extensive use of growls hinders this metalcore track from keeping the action going. Although for BOY, growls as a callback to the upbeat chorus mesh better and are well complemented by NATSUMI’s explosive fills on drums.

Ultimately winding the party down with Dream Eater that rolls out “something borrowed” with a harpsichord in the mix. As the nightmare nuptials proceed like retro psychedelic rock on this tune. Although a surprising shift occurs on A Glorious World, a more pop-rock song than what they have done before. As some may feel this is out of place, nevertheless proves they have the range to perform a softer number. And that sets up Starlight to end the ceremony. Here, KIMI flexes her vocal chops over a wonderful power ballad.

For the most part, BRIDEAR does their best to tie the knot between hard rock and metal. While being mostly familiar and somewhat experimental all in all, Bloody Bride is an enjoyable event. Though some songs like Glitter may only work as filler, on the whole, this album is a respectful succession from the previous album Expose Your Emotions. So, get a preview now on select streaming platforms. Though if you still have cold feet then perhaps see them live when they tour Europe on the Into The Dark Forever tour in September and October. 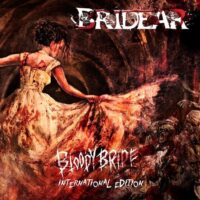