As we’ve come to expect ever since NUL. announced its three consecutive releases, the band has just introduced its third digital single nomad, a delicate and mellow piece that you will be able to enjoy on October 28.

nomad is an aerial ballad that is joined by the emotional sound of violins, with its main feature being HIZUMI’s low-pitched, yet voluptuous voice.

Composed by Kishi himself, the song has taken a different approach as opposed to what we’ve seen with the previous two singles, BLACK SWAN, and KaLiMa. And just like the two, the new digital single nomad will be available on major digital platforms.

It is the last announced release that comes before NUL’s first album, set for winter 2020, which was initially scheduled to be released during the summer Japan tour, but eventually got postponed due to the pandemic.

This delicate sound is definitely making us crave to hear what the new album will bring, and programmer Kishi is currently working hard at it!

In case you haven’t come around to do so yet, you can still prepare yourself for the long-awaited album with our exclusive interview with the band! This will give you a better idea of the band’s concept—or rather, the lack of. 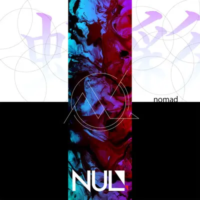