Released on digital platforms worldwide on July 24, Session is STEREO DIVE FOUNDATION’s first-ever digital-only single. It was recorded and produced entirely at home, during the period of time those living in Japan were requested to stay inside to prevent the spread of COVID-19. The single is extra special as it created with the help of the fans!

Frontman RON brought up the idea of a fan-collaboration early May and later took action to formally request submissions. He invited fans to participate by sending recordings of themselves playing instrumental parts, singing the chorus, or clapping, which allowed musicians of any skill level to participate. The purpose of the project was to take fans’ contributions and work it into the track in hopes to bring a little happiness to all those waiting at home.

While the time spent at home was growing for everyone, I still wanted everyone to enjoy music even if it was just a little.

Not long after, a teaser for the song was uploaded where RON had incorporated the contributions. The lyrics were also written after having received the submissions in order to be able to fully respond to all the support, stating:

I wanted to respond to the feelings of everyone who supported me.

Keeping the theme of “enjoy music together and make every day happy” in mind, the finished track combines many fan voices, instruments, and sounds to create a truly unique collaboration. You can get a glimpse of the behind-the-scenes through videos at the official STEREO DIVE FOUNDATION Instagram account.

RON himself recommends putting on some comfortable clothing—like the official T-shirt with the jacket art emblazoned on the front—and relaxing with a hot cup of coffee whilst you listen.

Session is a warm, upbeat song that truly was only able to come about because of the situation worldwide right now. 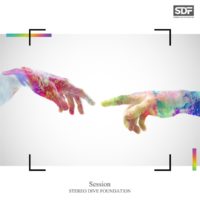