Today, we’d like to shine a light on the visual kei duo COAGULA! Even if you haven’t heard the name before, you probably have heard of its vocalist, SHOW, who previously fronted the disbanded VAASTU.

VAASTU dissolved nearly five years ago and despite showing great potential at the time, they called it quits three years into its career. Some of the members took new paths, joining bands that didn’t fare better. However, SHOW continued his path differently. With low-profile solo projects in 2016 and 2017, his passionate rock cover of EXILE’s famous song, Ti Amo, became the most notable one.

More currently, SHOW returned to debut his latest duo project, COAGULA, in 2019. This time he’s is joined by his long-time friend HAINE, the guitarist of the duo who is surprisingly originally from Germany. He may be a newcomer to the visual kei scene but he’s been active in other creative fields too. Besides starting his solo-project as a guitarist, under the pseudonym name KAI, he works as a well-esteemed illustrator and publishes the manga DIO+. His excellent skills in visual art have already gathered almost 200,000 likes on his Facebook page.

Together, the pair released their first single and music video, DYING BREED, on January 8, 2020. But, not without the help of an old friend and some familiar faces. Drummer 39 of TRNTY D:CODE, and bassist Яyu of Ashmaze both act as support members, and Mio, the vocalist of NAZARE, mixed and mastered the ominous track. Check it out:

Shot in the famous Underground Temple, the strongly religion-inspired video depicts SHOW as the Antichrist, adorned by a crown of barbed wire and moving like a broken, possessed puppet. The music delivers aggressive guitar sounds, explosive drums and a voice torn between screamy verses and emotional choruses.

DYING BREED is free to stream on Spotify, and Apple Music, but you can also buy it on Amazon Music! 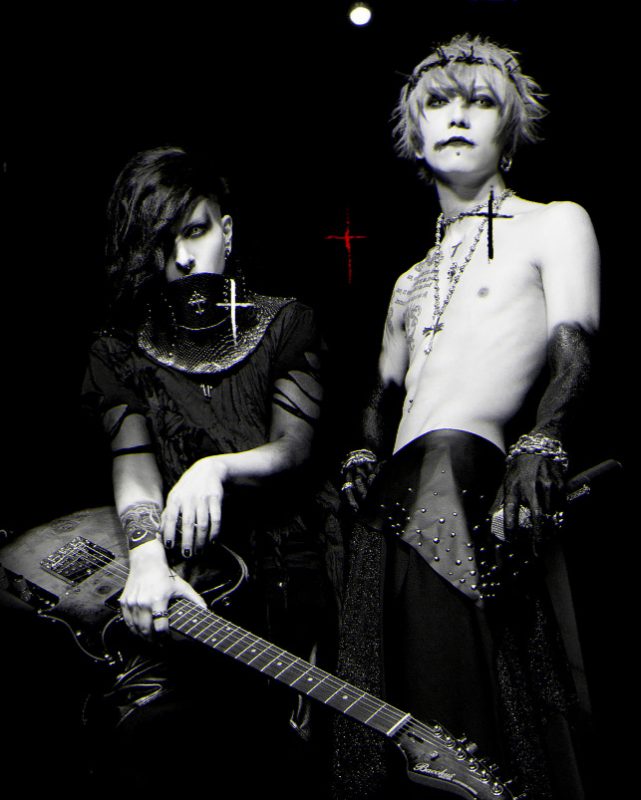 We have taken the freedom to translate the interview found on COAGULA’s website. It’s full of details and interesting information, so read on to learn more about the band!

Would you please introduce yourself?

What are your positions in the band?

What is the name of your band and how do you spell it in Japanese?

What is the meaning behind that name?

SHOW: COAGULA comes from the word “coagulation”. We chose that name so we and fans can become one.

When did you two meet for the first time?

HAINE: A long time ago! More than ten years, actually! At that time, SHOW had beautiful, long blond hair!

Would you tell us more about your first impressions of each other?

SHOW: When we met for the first time, we were somehow unable to communicate properly, so we drew things to express ourselves. But when I saw HAINE’s scrawlings, I had the conviction we could get on well [laughs].

HAINE: It was a day with a pleasant temperature, a gentle wind blowing and the scent of coffee wafting around us [laughs].

Who is in charge of lyrics writing and music composition?

HAINE: SHOW is composing our songs and I have the exciting role to play them! I love to perform rousing and violent tracks!

What is the concept of the band?

SHOW: COAGULA is constantly linked to art. Through our work, we want to express emotions and feelings everyone holds inside them, lurking at the bottom of their hearts.

HAINE: Our concept is deeply artistic. We express feelings related to insanity, madness.

How did you come to form the band since you met?

SHOW: When we met 10 years ago, we tried to create a band but circumstances weren’t favorable so we couldn’t make it happen. And recently we thought that things we wanted to do a long time ago can become reality now.

HAINE: Somehow, we suddenly remembered the past, 10 years ago, and decided to do it.

Could you please leave a message for your fans?

SHOW: There may be some COAGULA fans already, but it’s not something taken for granted. I wouldn’t mind if you abandon us if you think we become boring. But I swear we will always exceed your expectations. From now on, let’s nurture the dream called COAGULA together.

HAINE: First I want to thank everyone who is already supporting COAGULA! There are not enough words which could express how important it is for me! It’s like a dream come true, and being able to share it with wonderful people is even greater!