BABYMETAL is currently on a world tour “METAL GALAXY WORLD TOUR” and is checking off a bunch of new countries they never visited before! We got together with SU-METAL and MOAMETAL during the European leg to speak about how they’ve grown as performers and also explore the latest album METAL GALAXY.

There was a three-year gap between album METAL RESISTANCE and your latest METAL GALAXY. How has BABYMETAL evolved in that time?

It indeed was a surprise, especially with all the major artists you’ve been able to collaborate with to create METAL GALAXY. Can you tell us a little about how their influences have shaped the album?

SU-METAL: Touring worldwide has taught me that there is a very diverse spectrum in music. And as we started to work on the album, we created the tracks and had a wishlist of people who we thought would best fit for the track. We made the offers to the top people on our wishlist and luckily every one of them agreed! We feel very lucky to have been able to collaborate with each artist and feel that we’ve widened the spectrum of BABYMETAL’s music.

Even though you’ve widened the spectrum, the core of BABYMETAL still revolves around its unique concept. Because of this, isn’t there a big gap between the type of fans you serve at home and overseas?

MOAMETAL: Rather than focusing on the differences between territories, I think people react to our music differently on an individual level and so I love seeing these differences when I perform. It is absolutely gratifying to see people enjoying themselves and that is what I perform for as it is the source of my energy. We would like more and more people to enjoy and like BABYMETAL, so we will continue to do our best to give them the best performance we can.

The song Elevator Girl represents your growth and maturity, and similar to that idea, hasn’t the vocal style matured as well?

SU-METAL: For the older albums, my voice was the leading guide to creating the tracks. But this time around, I sang to the tracks that were already made and really experimented with the way I sang. And I feel that this change has allowed me to widen the range of my vocal skills.

As for the choreography, we’ve noticed it change little by little over the years, is this also a reflection of you guys growing up?

MOAMETAL: Yes it’s definitely changed. For example, the choreography for the song Elevator Girl is a bit more mature than some of the other songs that we’ve had in the past. The choreography for all songs is very intricate and we’re very conscious of even the finest details; we even focus the energy up to our fingertips and concentrate on showing the elegance of the female form. In the past, the choreography reflected our youth so there was a lot of jumping and cuteness involved. And now that we are older, the choreography focuses on the elegance and the beauty of us maturing and so I have been and will continue to do my best to show this in my dancing.

The elegance and fingertips-focus are noticeable right at the beginning of the Elevator Girl music video.

How are you currently feeling about the world tour? There’s a lot of new countries that you’ve never visited before, like Sweden, which is the very first location of the tour.

SU-METAL: I was really looking forward to going to Scandinavia. It’s where metal music is very popular and I was very interested in the crowd’s reaction to our performance. We are going into a lot of territories we’ve never visited before so I’m so excited to visit these places!

Out of the new album, which would be your favorite song to perform?

MOAMETAL: I would say Gimme Chocolate!! I feel that BABYMETAL became universally known through this song and it brings such good energy! I especially like this song because during the call and response portion, I can see each and every one of our fans’ faces but also hear their voices. I also like PA PA YA!! for the same reason. Songs that bring us together with the crowd is always such a fun experience.

SU-METAL: Megitsune because the melody and choreography reflect Japan. I also like it because when we perform this song, the crowd gets hyped up and I love feeling their energy! 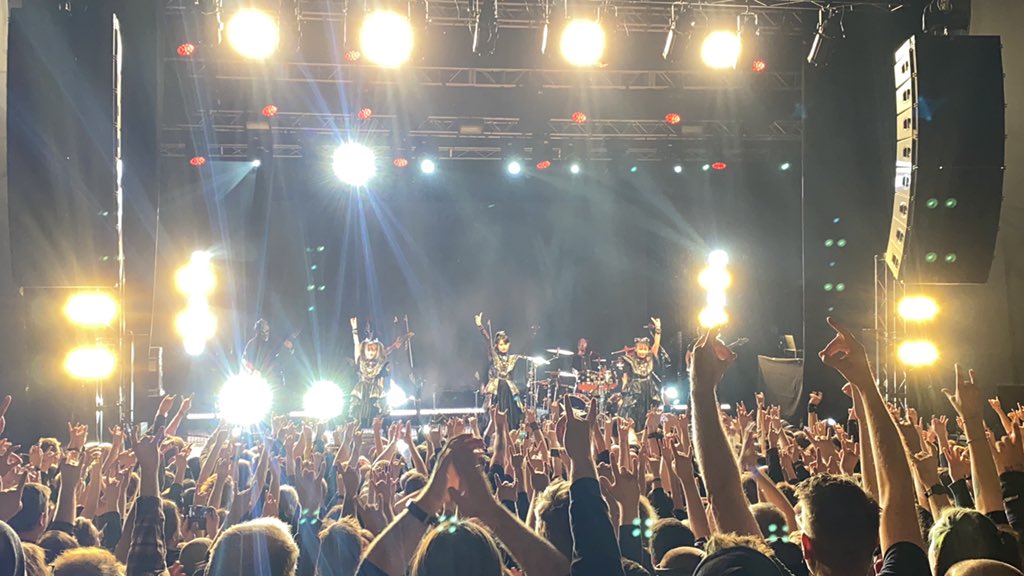 Considering how much you’ve guys been touring and meeting new people, are there any of them you would like to collaborate with for the next album?

And I want to take a moment here to express my gratitude to all of the amazing encounters we’ve had up til now who we’ve met from all over the world. Thank you so much!

Now that you’re on the road, what would be the typical thing you miss from Japan?

MOAMETAL: The number one thing that I miss the most is my family. The next thing is food. It’s not particularly Japanese food that I miss but rather, food that is only offered for a limited time while I’m away from Japan and I feel sad to be missing out on these things. Also, I always crave Japanese karaage (fried chicken). [Laughs]

Please leave a message for your overseas fans!

SU-METAL: We are currently on our European leg of our world tour. I think BABYMETAL’s biggest appeal is our live performance so for any of those who are interested, please come visit us and see our show!

We’re so grateful for the members taking their time off despite their tour schedule being fully packed—almost every show on the European leg is sold-out! If you’re interested in more BABYMETAL related insight, we will have more content coming out soon, so stay tuned!