Continuing on with our Animé LA series after our interview with FEMM, we were able to speak with the fun-loving punkettes of BRATS. Next in this series, we will have a report on their amazing first US performance. Here is a quick spoiler alert, fans were on their feet and jumping to the beat for the encore. Now, the three young ladies of BRATS: Rei Kuromiya (vocals), Aya Kuromiya (bass), and Hinako (guitar) give us an exclusive insight into their music and on their visit to sunny California. They were kind enough to take time out of their busy schedule to talk about that concert and update us since we last spoke with them. 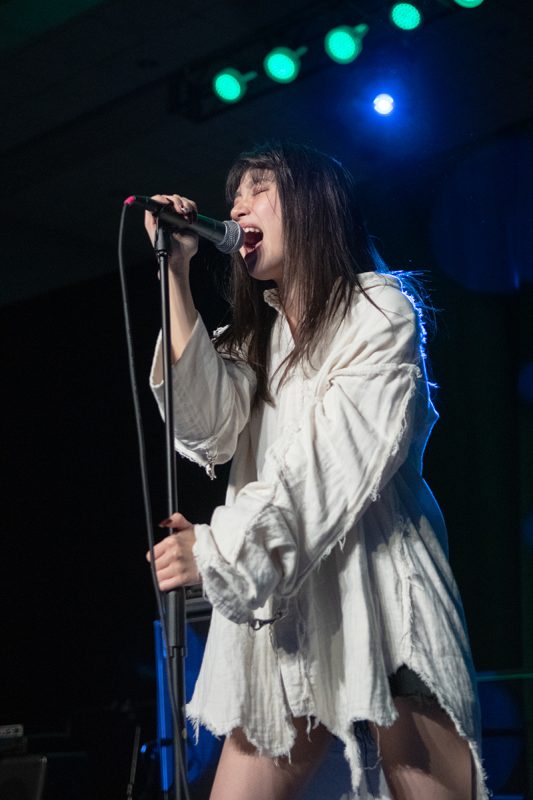 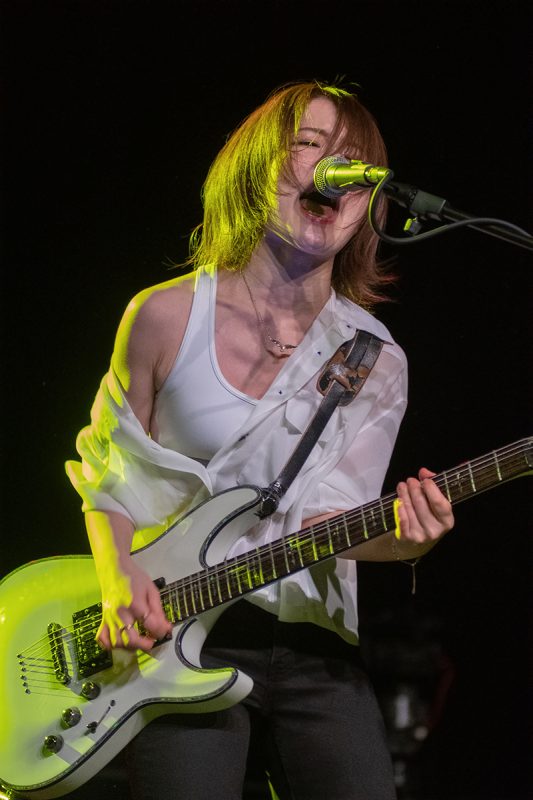 Let’s first talk about that encore song, Ms. Downer. How exciting was it for you to see the audience get up from their seats, come forward, and jump for you?

Rei: Usually when we perform that song in Japan, it’s a venue where everyone is already standing so at this convention hall where everyone was sitting, the fact that everyone would stand and get really involved was awesome. We didn’t think that people would come to the front and be a part of the song. We were super surprised by that, but I also felt like we were all one. It was a real moment of unity with the audience.

Hinako: You know, there are parts of the songs and the performance where people have specific routines (in Japan), but everyone was just doing what they wanted to do with the music. It was really wonderful to see them express themselves freely. It was amazing.

On Twitter, you talk about what it feels like in front of a Japanese audience. What did you experience from this crowd that was different last night?

Rei: They made a lot of noise! [Everyone laughs] And they sang along.

Aya: In Japan, they don’t sing. Whereas last night, they sang with us.

Now onto new music. You played Excuser in last night’s set which has the English line “There is a liar”. In some of your other songs you have English phrases. What do you want someone who doesn’t know Japanese to feel in your songs?

Rei: With BRATS songs, we are known to not be traditional J-Pop, the glittery kind of music. That’s not who we are. We represent more of a darker tone with our music and try to go for a deeper nuance. We want people outside of Japan to pick up on things like that. So, we add English phrases for someone who doesn’t understand Japanese, and hopefully, they can get an idea and feeling of what the song is about. Then when they listen to our music on an album and watch the music videos it adds pieces to a puzzle that form a full picture. I don’t believe in having this perfect song or melody. A song can be raw and energetic, yet still have passion and emotion. It’s an extremely important part of the composition so that it can become its own thing. And that’s very important for our music to have that raw emotion.

Aya, when did you decide to start playing bass? Is there a reason you wanted to learn to play that instrument?

Aya: My first year in junior high, I joined a band and the only instrument that was left was the bass. Everyone was very insistent about what instrument they wanted, so I ended up with the bass. But, I stuck with it and grew to like it. In Japan when bands come together, bass is always the last thing to get picked. For whatever reason, it’s not as popular as the other instruments.

Rei: But bass players are always the most popular. It’s usually the hot guy in the band! [Laughs] At the after show, everyone was talking about our bassist.

Aya: That makes me happy! [Claps]

Hinako, what do you find most challenging in playing lead guitar?

Hinako: Solos! I get a musical high and worry about getting out of rhythm. With BRATS, I keep to the song as it was written, but maybe in the future I might improvise a little. [Laughs]

In September, you started up your fanclub. Has that changed the way you communicate with your fans? Has that helped in getting your music to more people?

Rei: I feel that until we had the fan club, people who knew about us would come to our shows. After starting the fan club, now there are new fans showing up. And it has made these threads between people, kind of like branches of a tree growing out. People in the fan club are bringing new fans. It’s been really effective in getting new people to know about us and our music. And we hope to have more of an international presence in our club as well.

This year, you plan to release new singles each month, seven in total. How excited are you for that and what has the process been like?

Aya: The mixes of the songs are really cool and sound awesome. Plus, we used a big studio this time so instead of one person recording just their part, we all performed together. So, we had a really good synergy and enjoyed playing with each other in the studio. We hope listeners feel what we felt in the studio through our music.

Any parting messages for your fans in America?

Rei: I will power up when I get back to Japan. Because there were a lot of people from Animé LA that heard our music for the first time. And I really hope they will learn more about us and listen to our new music. Also, we want the opportunity to come back to do more live shows in America. So, I will go back to Japan to work hard with the expectation of coming back.

Hinako: I came to Animé LA not knowing what to expect and I got a big shock, in a good way. It was a shock to the system. I hope if people visit Japan, they will come and see us and watch us perform there. Also, I will work really hard, so that when we come back to America I can see the fans again and play a great performance for them.

Aya: First, we are very honored and very happy that we were in the JROCK NEWS Top 15 Japanese rock artists 2019. Thanks to all the fans that voted for us. At this concert, there were a lot of people that heard us perform live for the first time. We will continue to work hard and get better. Now that I know a lot of people in America check out the bass player, [laughs] I will personally work very hard to live up to their expectations. We will go back to Japan to improve with the hope of returning. Thank you very much.

Additionally, we will be waiting for and listening to the hard rock from our favorite Jrock punkettes. Up next, we talk about that first big show. We’d like to thank Animé LA and organizers involved who made this interview possible.