The annual event Magical Mirai honors the digital characters from the software company Crypton Future Media, such as Hatsune Miku, Megurine Luka, Kagamine Rin/Len and more. This time around, taking place in both Osaka and Tokyo between August and September, the event was hosted in a total of six days where five of them offered concerts. We decided to visit the second day of the event in Tokyo at Makuhari Messe, on August 31, the day Hatsune Miku was born.

Last year when we visited, the event commemorated the 10th anniversary of Rin/Len, but now was the time for Luka to take the spotlight with her 10-year anniversary celebration. The event was still of course centered on the front figure Hatsune Miku, however, there was a lot of Luka-themed content at the Magical Mirai exhibition; continue along with us and have a look!

As soon as you step into Magical Mirai, you’ll see a welcoming entrance that gives it that carnival vibe. This is themed around the Magical Mirai 2019 theme song called Bless Your Breath and was composed by Wada Takeaki, you may know him as KurageP. Inside the circus tent, we’ll find Hatsune Miku in all its glory. This again is a reference to the song Bless Your Breath where the music video takes place in a circus tent.

A 1:1 scale statue of Hatsune Miku.

A view of a portion of the venue.

The workshop offered various playful things to create. You could go there to draw, hand paint, and even decorate small keychains yourself. The keychains were popular too and gathered quite a line.

One of the keychain shapes available to decorate.

Besides the painting and drawing done at the workshop, there was a live painting session going on nearby. The live painting was performed by the college Chiba Designer Gakuin, creating a portrait of Hatsune Miku in her Magical Mirai 2019 outfit which was designed after the theme “Future Circus”. This specific rendition of Miku was designed by Hakuya Rei, a student from the school.

Leek Miku at your service! Protecting the painting from unauthorized visitors.

And of course, lots of other illustrations dedicated to the event were presented to visitors. Some of these illustrations were printed in various official merchandise that was sold at the event, including artwork by Chisuke (千助), Zain (ざいん), KEI, iXima, Sogawa (姐川), and Syugao (しゅがお). All the illustrations have their own distinct style and each one of them outputs a different kind of feel.

A massive wall consisting of fanart.

With any Miku-related event, there are lots of cosplayers who attend, and this one is no exception. What caught our attention were two fashionable visitors who wore matching outfits with charming details like the white mini-tophat. And with that little detail, we realized afterward that this was actually a casual cosplay inspired by this year’s Hatsune Miku main visuals.

This year’s illustration was created by ni02. 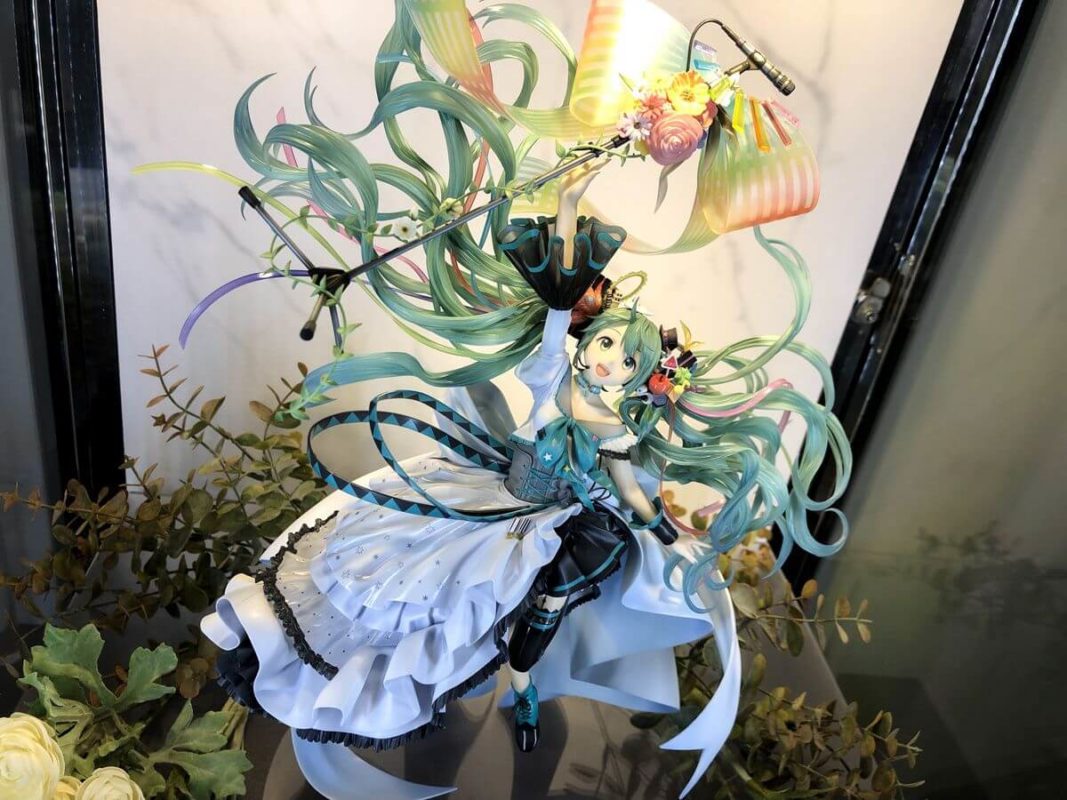 A sea of Hatsune Miku collaborative merchandise booths could be found all over the venue. We saw booths such as Rascal the Raccoon, Racing Miku, the convenience store New Days, and booths selling Miku-themed snowboards, hair color treatment, and even computer parts as we will see a bit later. 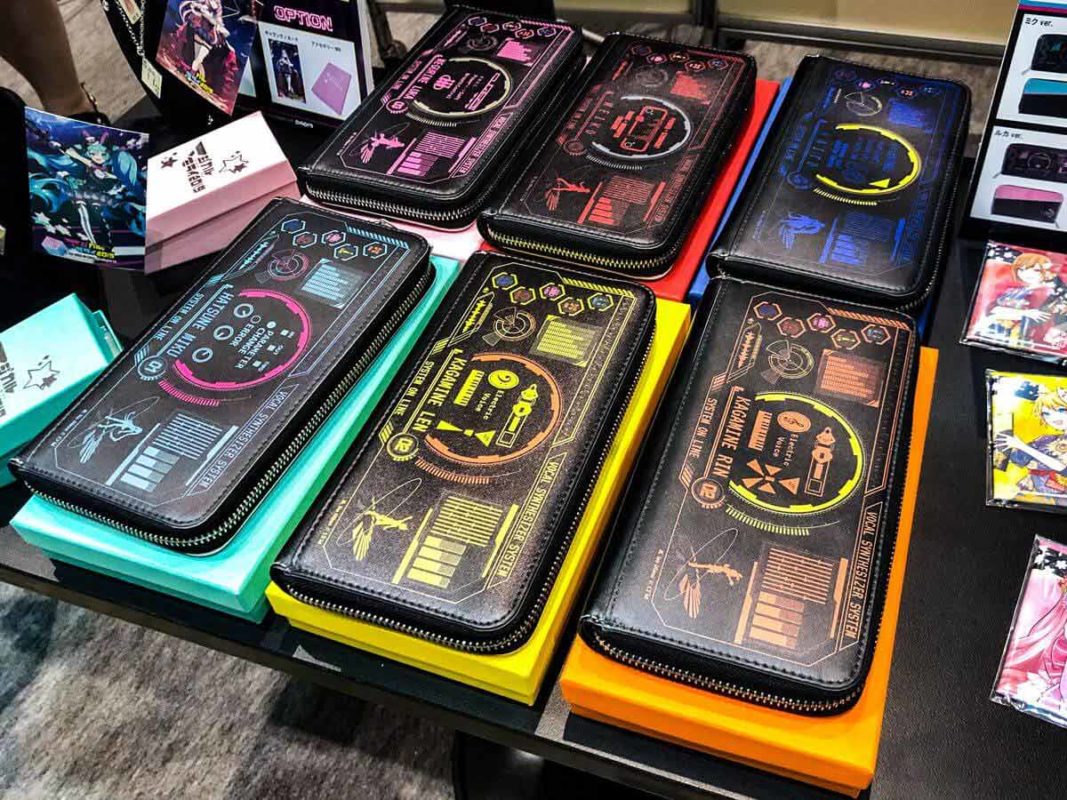 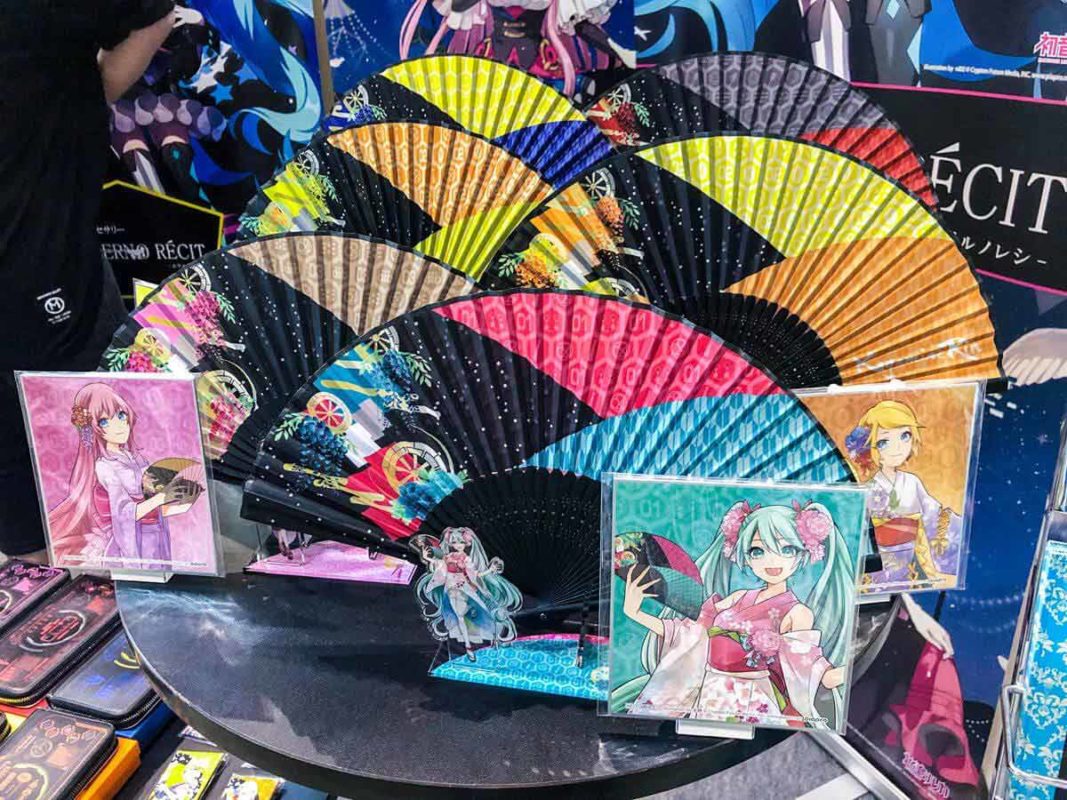 Cheveux Ensemble collaborates with Miku to bring officially licensed Hatsune Miku hair color treatment. Besides the big line-up of Miku hair treatment, there are additional ones featuring MEIKO, KAITO, Luka, and Rin/Len. The colors are named with the lovely prefix “Candy” such as “Candy Blue”, “Candy Green”, and so on.

Miku Racing could be found scattered around the event floor. One of the most notable things they brought was their Mercedes-AMG Team GOOD SMILE racing car decorated with Miku. Cars typically decorated with fictional characters are called “itasha” in Japan. 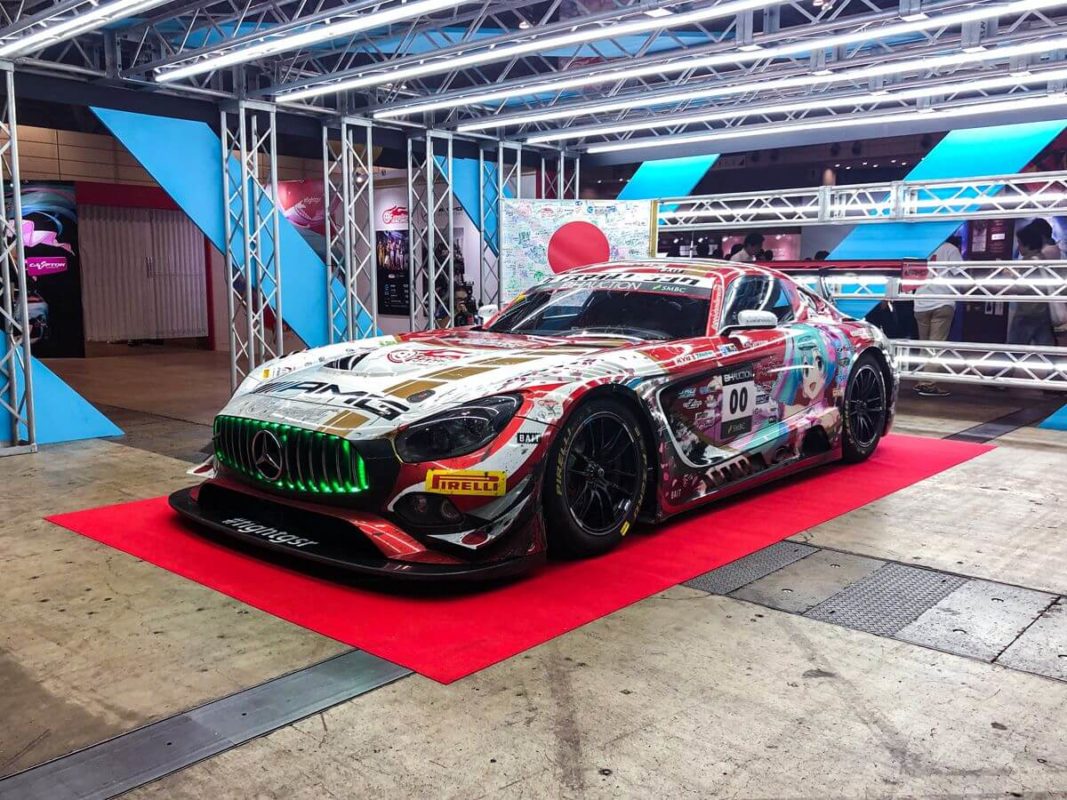 Some of you might have been intrigued to get a Miku decorated car after seeing the racing car, but there are other ways to get the Miku experience without plastering the exterior with stickers. The car company Daihatsu has collaborated with Miku to give their “MOVE Canbus” an exterior and interior Miku makeover.

Stepping into a MOVE Canbus reveals just how much detailed has put into the interior. There’s a lot that has been customized, like the steering wheel, seats, shift lever, seat belts, and even the dash camera is customized to follow the color theme.

SEGA showed off their rhythm arcade game Ongeki Summer! which has a dedicated category for niconico songs, many of them being Vocaloid songs featuring Hatsune Miku and other Crypton Future Media characters.

The VR both showing off “Hatsune Miku VR” available on PlayStation VR.

The monitor allows spectators to see the environment of the player.

Moving away from the gaming, we encountered vinyl dolls made by the company Dollfie. 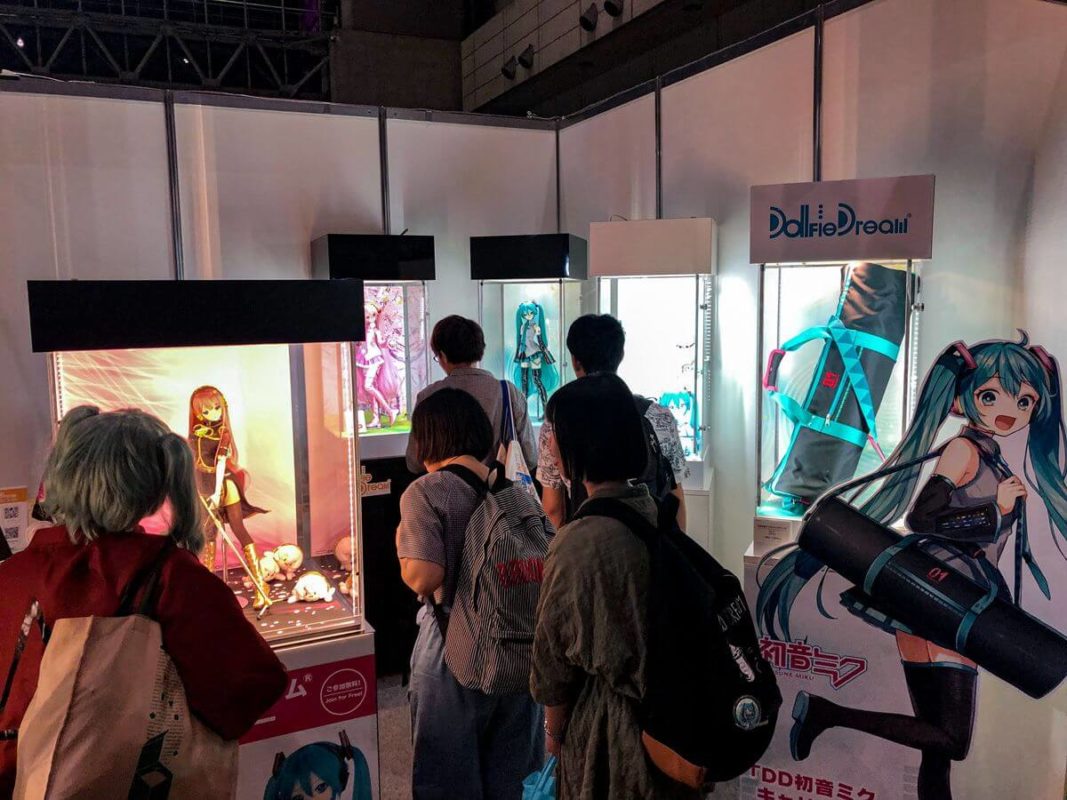 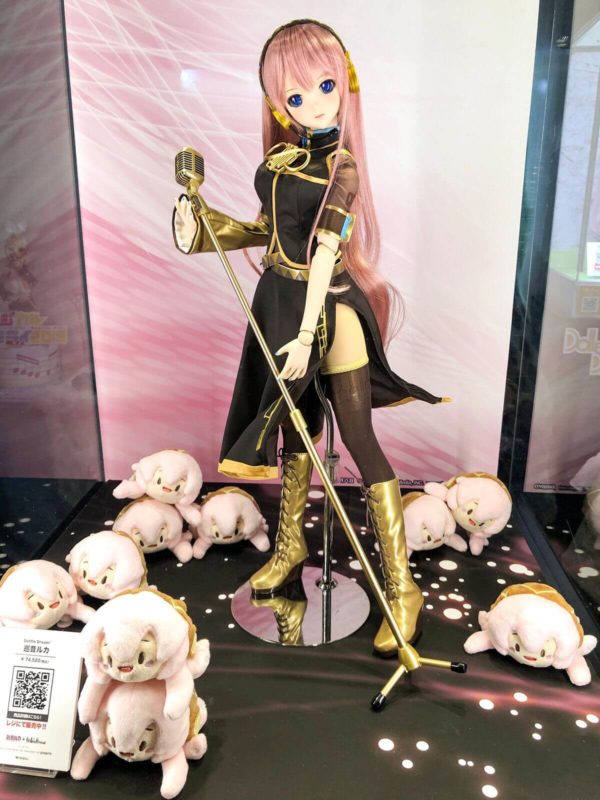 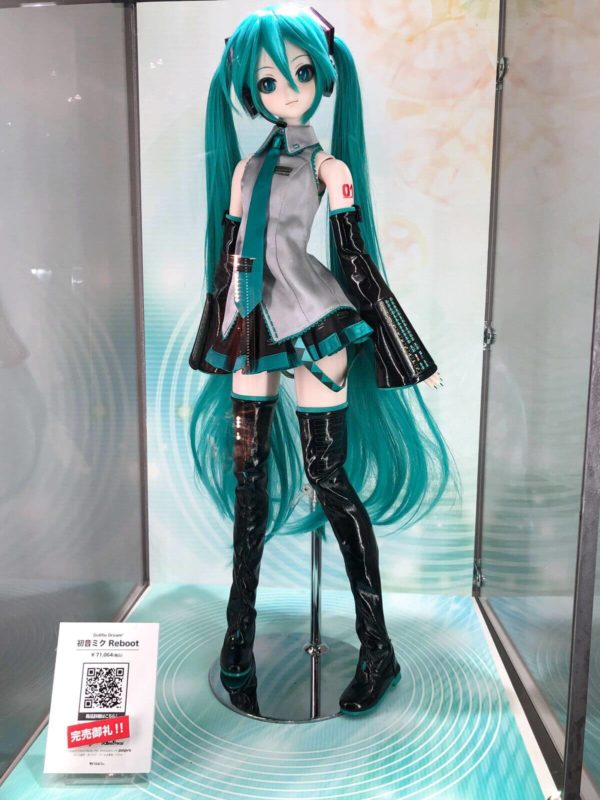 There were several places outside the workshop which allowed visitors to engage in creating art on different mediums, allowing anyone to draw and create whatever they like. Some of them were a bit more traditional—white surface with a black marker—while some other offered markers in different colors to be drawn over black fabric. But maybe the most interesting one was using colorful tape to add colors to the outlined characters.

Select the tape you want to use and start coloring the wall! 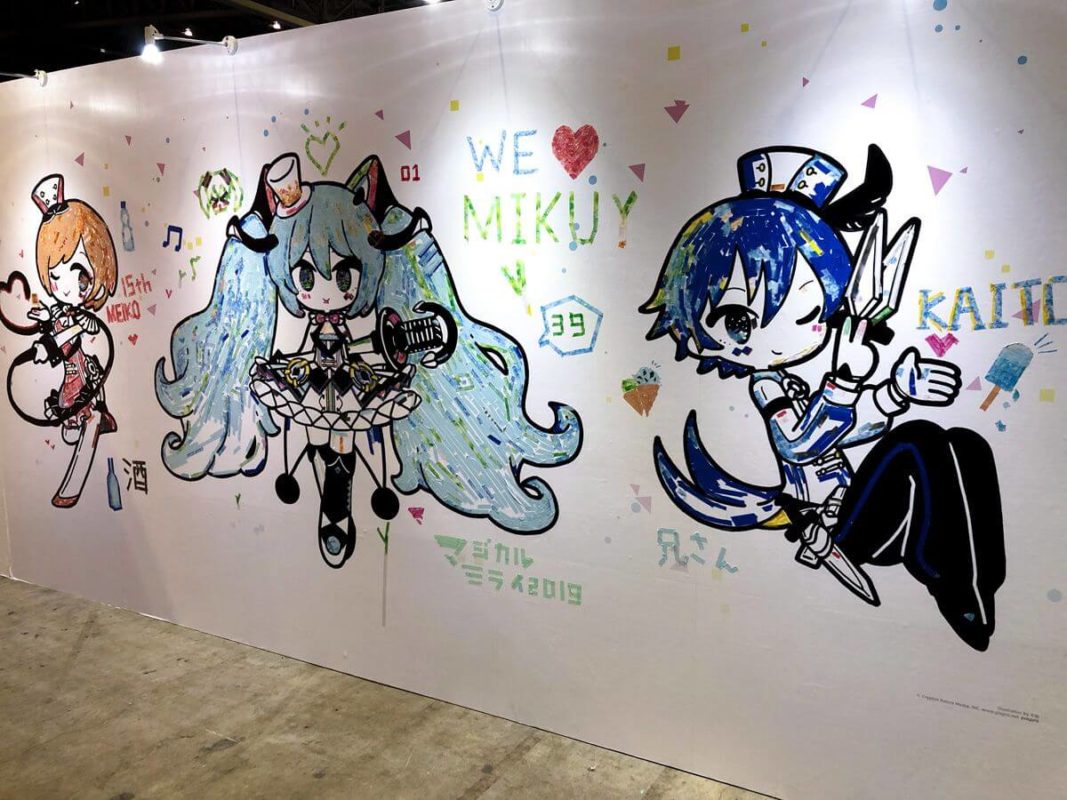 Some people would add extra flare like text and hearts, and interestingly a bottle of alcohol (next to MEIKO).

As this year celebrated Megurine Luka’s 10-year anniversary, lots of people showed their love by sticking post-its all over the Luka wall.

The company Mizuno Dye Factory, and Tsugaru Maguro Joshikai collaborated with Crypton Future Media to create an impressive Luka fishing flag! If you want to see how it was created from start to finish, have a look this video on Hatsune Miku’s YouTube channel.

We happen to stumble upon a friend who was appropriately cosplaying as Luka this time, carrying around a 60-year old camera and a can of Sapporo beer. This guy really likes beer, trust us.

Maybe the most bizarre thing at the exhibition was coming across the giant Mikudayo-! Mikudayo- is a human-size Nendoroid (deformed) rendition of Hatsune Miku. It’s a bit terrifying when it stares right into your soul. It looked even scarier when we received the honorable pleasure to see it deflated after the event ended.

Mikudayo- staring into your soul.

At the Creator Market, Vocaloid producers were able to sell their music to visitors in person. Due to the no-photo policy in this area, we weren’t able to get any footage. We did, however, buy some music albums and got them signed.

List of the Vocaloid producers participating in the Magical Mirai 2019 Tokyo Creator Market. 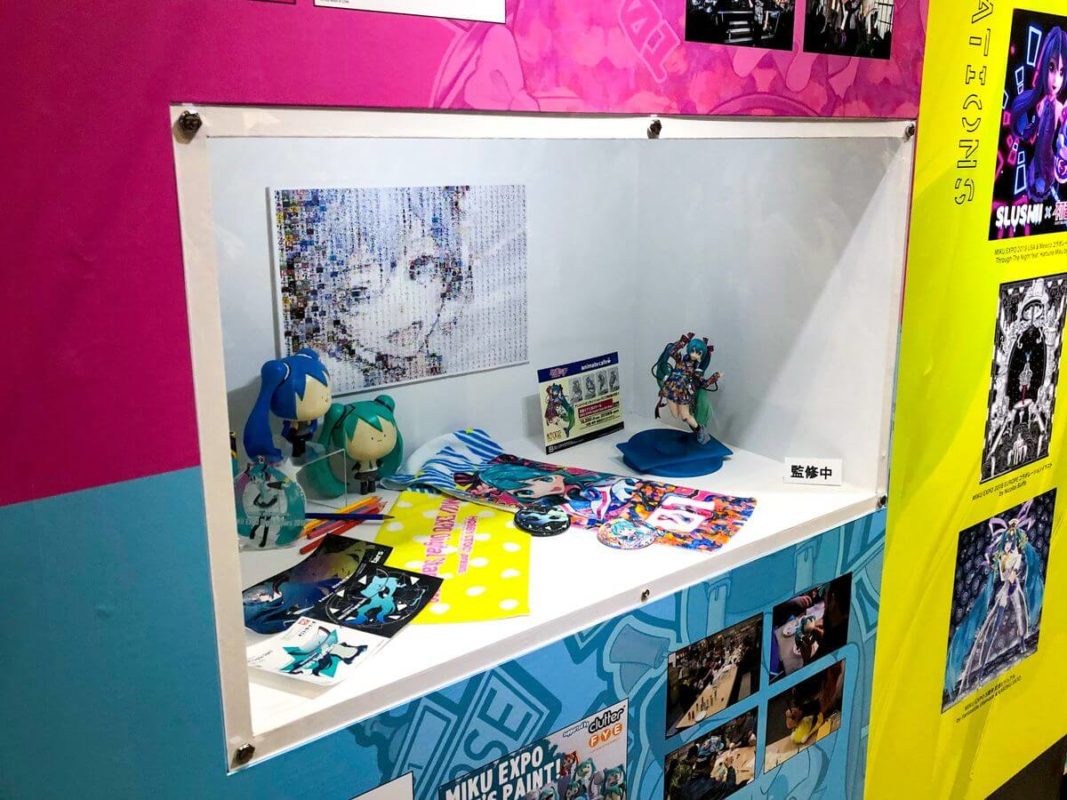 Not only does the exhibition target people who listen to Hatsune Miku, but also to those who create music using Miku. Yamaha among other companies showed off its product line.

Visitors were able to get their hands on the products and try them out for themselves.

A Vocaloid keyboard, or “keytar”.

Looks like Rin and Len are hard at work!

We ended the day by attending the amazing concert which featured Megurine Luka’s 10th Anniversary theme song Jump for Joy by EasyPop, as well as a special tribute to Vocaloid producer wowaka who sadly passed away earlier this year. The concert was held in the same venue, but in a different hall from the exhibition. If you decide to attend the concert, make sure to buy your tickets early!

The audience was already full of energy right at the start of the show. Photo: Crypton Future Media.

In what felt like a split second, the show was over.

Just like any other Miku concert we attended, we never really felt like going home after such an exciting concert, and luckily, this time we were able to attend the aftershow Magical Mirai 2019 Special Live. Since we attended the second day in Tokyo, the featured artists were EasyPop (BETTI), NayutalieN, Matsushita, and KurageP (Wada Takeaki).

Normally Vocaloid producers would simply DJ on stage or sing, but in the case of KurageP, he brought his band along and performed their songs live. At end the show, vocalist KurageP performed the Magical Mirai 2019 theme song Bless Your Breath in a duet with Miku.

The Special Live that took place after the main concert.

Needless to say, if you’re already a Hatsune Miku fan, Magical Mirai is without a doubt an event you need to attend if you haven’t yet! It brings all the passionate fans and musicians together under two roofs (Osaka and Tokyo) and allows you to speak to your favorite Vocaloid producer face-to-face. Even if you’re not fluent in Japanese, just allowing the producers to know you traveled overseas to meet them already puts a smile on their faces. But of course, Magical Mirai wouldn’t be as magical if it wasn’t for the concerts! Make sure to get your tickets early if you plan on attending.

If you’re not yet a Hatsune Miku fan, try out visiting just the exhibition to see what Hatsune Miku is all about. The small entrance fee of 500 yen (~$5) quickly pays itself off with the activities available and the fun things to see. Besides the company booths, there’s a lot of cosplayers there to liven up the festive atmosphere.