Back in December 2018, Miku Expo took place in Europe for the first time ever and was held in three locations: Paris, France; Cologne, Germany; and London, U.K. We at JROCK NEWS were lucky to attend the mesmerizing tour final show in London on December 8, a fully packed sold-out concert!

Before going any further, let me give a quick introduction as to what and whom Hatsune Miku is, in case you’ve heard of the name but never really understood the idea of it. She is more or less a representation (anthropomorphism) of computer software, a software that can sing lyrics and melodies programmed by a user. This has allowed musicians all over the world to create music without the need for an actual singer. The combination of great musicians being able to freely distribute music using Hatsune Miku, along with a cute compelling character, created a momentum that allowed Miku’s phenomenon to spread worldwide. 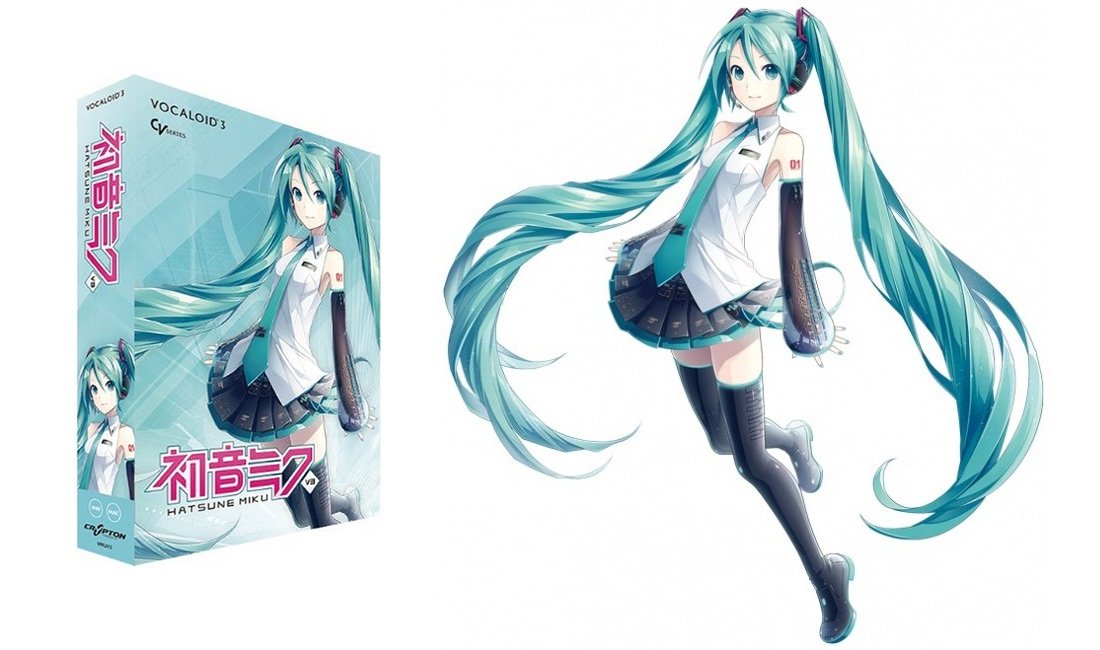 Hatsune Miku concerts are unlike the typical rock concerts many of you have encountered, not only because she herself is projected as a hologram when performing, but the fact that there is usually an event tied to the concert. In this case, Miku Expo offered a small exposition that took place hours before the concert where attendees could enjoy Hatsune Miku artwork, workshop (painting and drawing), and a merchandise section with a queue longer than the ones at Disneyland. Compared to the exposition in Japan however, this was on a much smaller scale. But nonetheless, I was incredibly surprised by the number of people that had arrived hours before the concert even started.

Get a glimpse of the exposition in the photos below, shared on the official Hatsune Miku Facebook page. 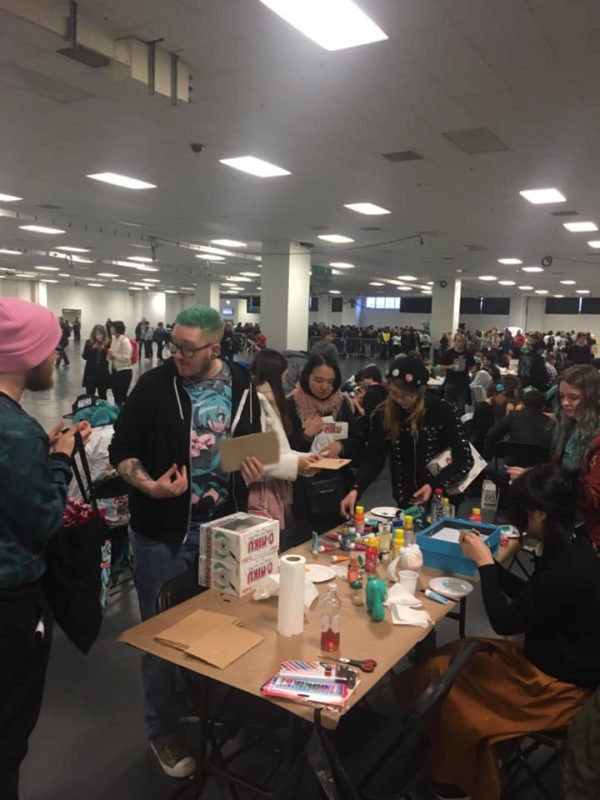 The people at the far back are lining up for the merchandise, while the people by the table are preparing for the workshop. 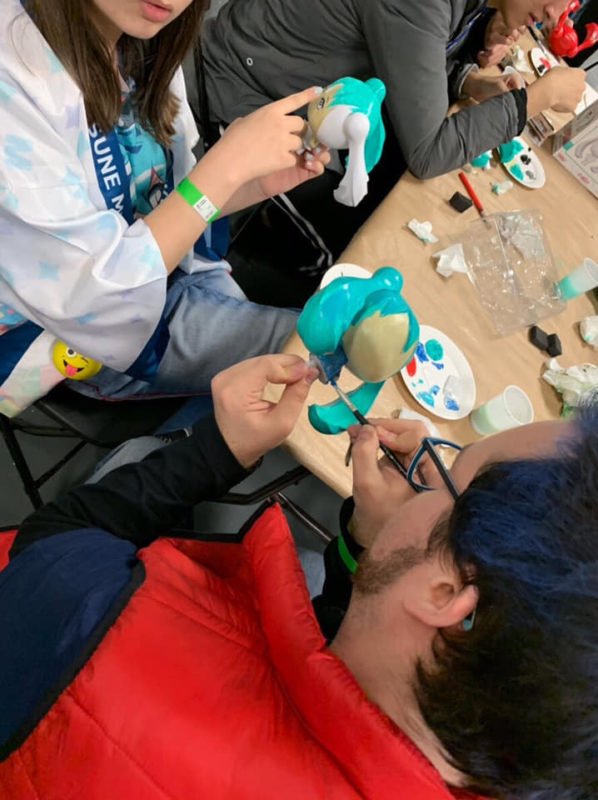 We also snapped some interesting parts of the exposition. 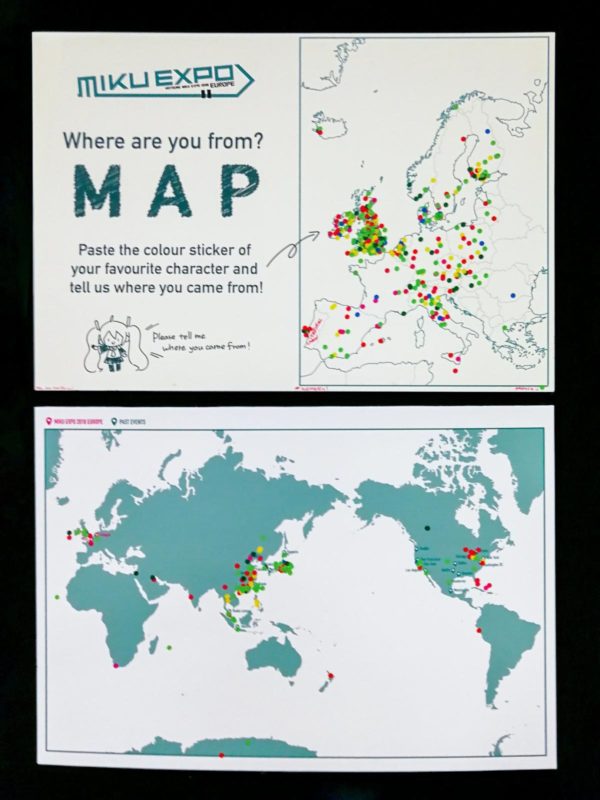 The concert was joined by people from all around the world! 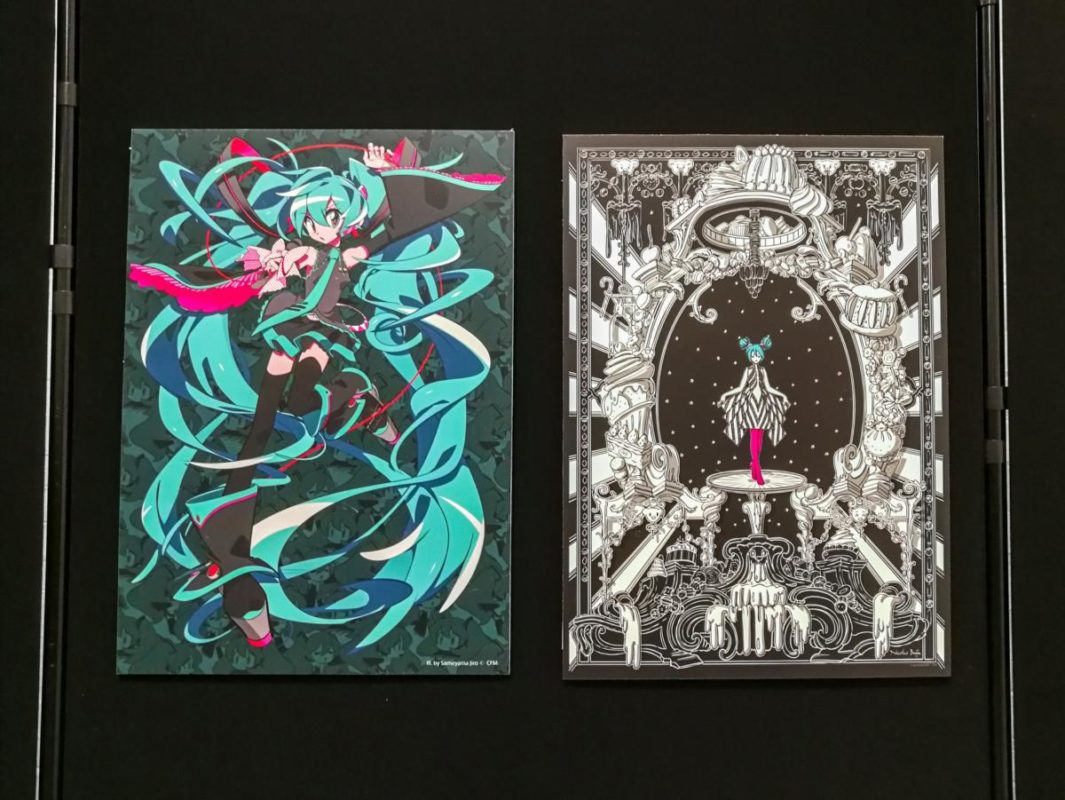 As for the concert, Miku is projected as a 3D-hologram on a translucent screen at the center of the stage, giving the illusion that she’s there in person, accompanied by a talented live performing band on the sidelines. The moment she magically appeared on stage, the thought of her presence being digital was already out of the window, and the surrounding fans would most likely agree considering how loud their cheer was, and by counting the number of flailing LED glow sticks in the air. Without much delay, Miku started singing and dancing to the first song on the setlist, Senbonzakura, an extremely popular song within the community. The fans responded immediately with their excited shouts that followed the beat of the song—with such enthusiasm that it almost drowned out Miku’s vocals. 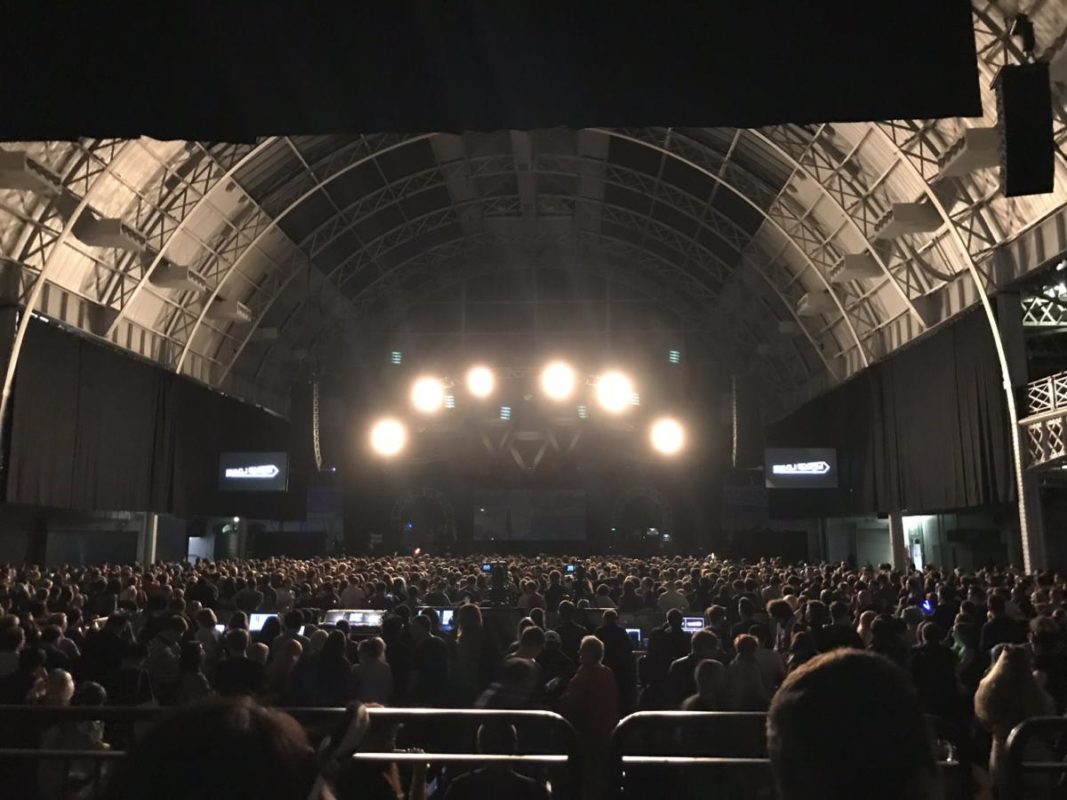 Tensely waiting for the concert to start. 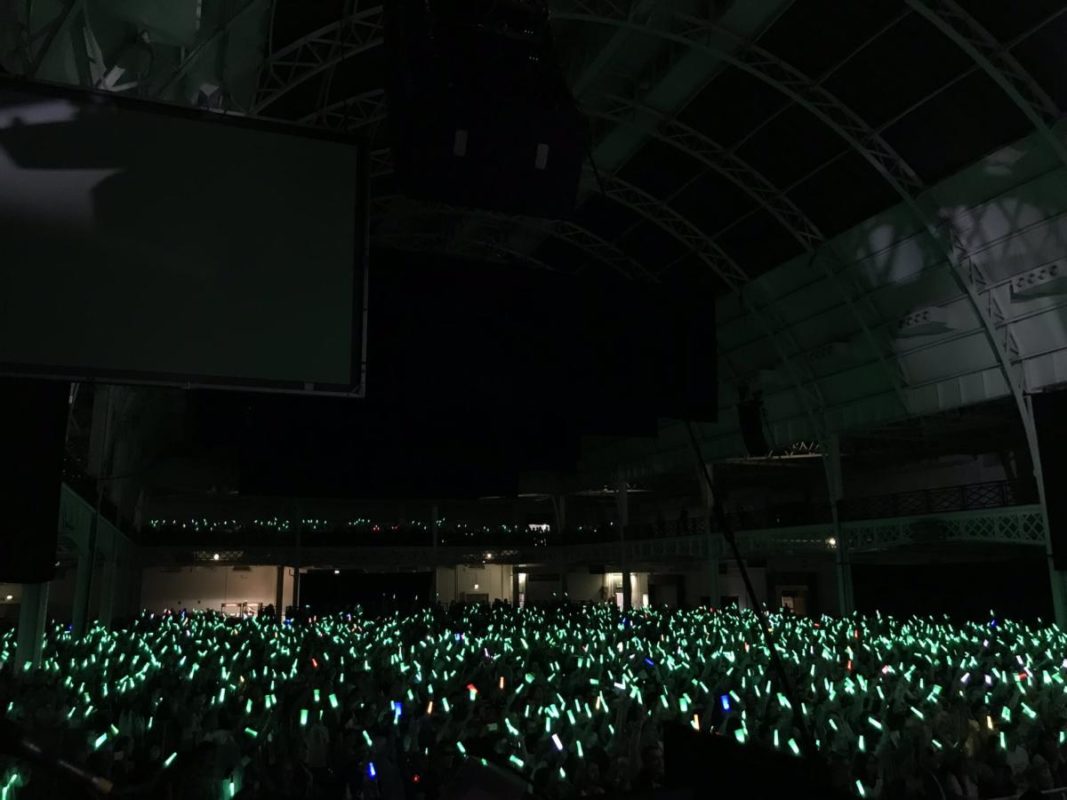 A packed floor with LED glow stick in the air from end-to-end.

Whenever Miku would do an impressive move or appealing gesture towards the audience, the fans would loudly cheer and encourage more of those exciting behaviors. She may be a fictional character, but the enthusiasm shown that evening was more than what I’ve seen in most rock and metal concerts I’ve attended. At times, Miku would even be accompanied by a flashy digital aura effect that trailed her movements, making the performance more scenic and immersive. Another thing I appreciated was that Miku would put on a different outfit to match each song.

A big part of the Hatsune Miku concert experience also comes down to the LED glow stick which you can buy before the concert. In addition to being fun and beautiful to look at, it is also a tool enabling unity between the thousands of people that come to the show. The fans would change their glow stick choreography depending on the mood, for instance if the song reaches a more climactic and energetic part, the fans would fist pump; or if it’s a balladic section, they would slowly wave.

While a lot of the songs played at the concert were fan-favorites, I was personally most thrilled when they started playing the high-paced electronic song, Bring it on by Giga-P (Reol‘s sidekick). And of course, I wasn’t the only one, because once everyone realized what song was being performed, the excitement instantly grew!

The show offered a variety of other songs as well, for instance, the funky Roki, the rocking Ghost Rule, a handful of balladic songs, and of course, handpicked classic ones including World Is Mine, Melt, and The Disappearance of Hatsune Miku.

After two incredible hours—which only felt like 30 minutes—the concert had sadly come to an end. I’m truly grateful Crypton Future Media (the company behind Miku) finally decided to give the European fans a chance to experience a show like Hatsune Miku. It is nothing like any rock concert I’ve been to, and the energy exuded by the fans was magnificent. It is also thanks to the fans’ passion for Miku that allowed her to come to Europe for the first time. The show being sold-out made it even more evident that the European fans are definitely craving for more!

Look out for the next Miku Expo which will take place in Taiwan and Hong Kong this summer! 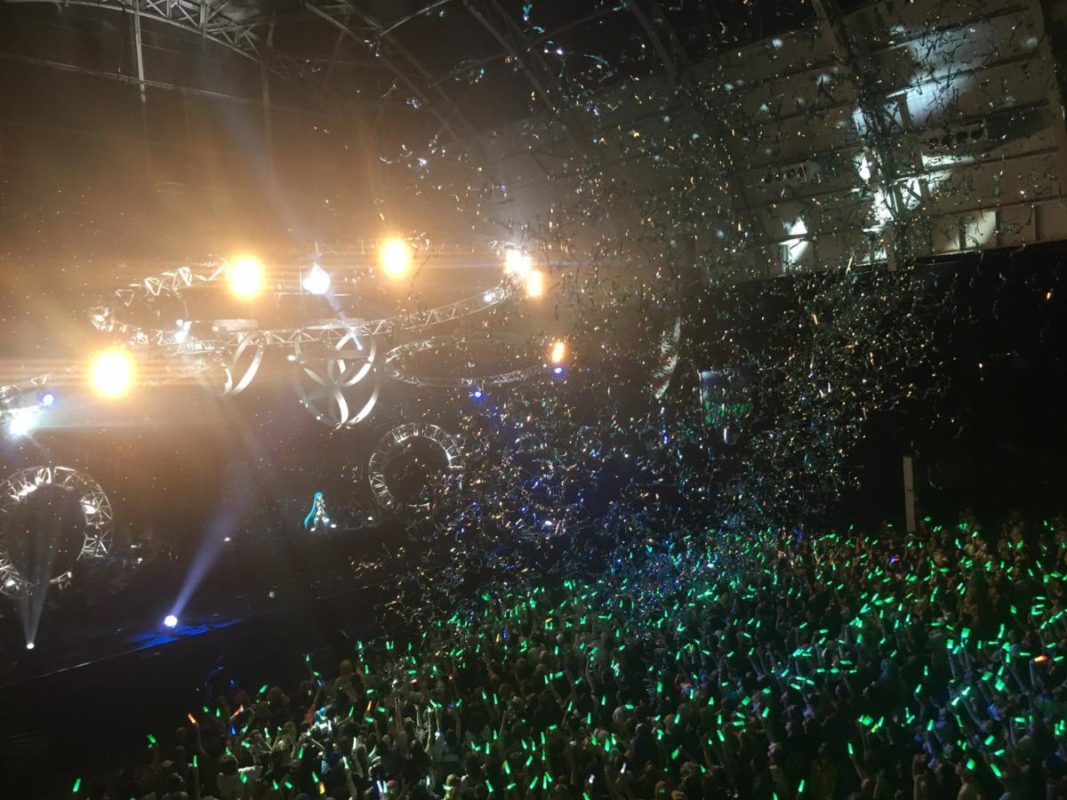 The explosive final during the last song, “Tell Your World”.