DIR EN GREY have disclosed that they will be coming back to Europe in October 2018. The announcement revealed DIR EN GREY’s eight tour locations across Europe as well as tour dates. Countries on this list are Russia, Finland, Poland, UK, and Germany.  Their tour titled TOUR18 WEARING HUMAN SKIN shall begin on October 6 in Russia, and end with their tour final show on October 19 in Germany.

This tour will mark DIR EN GREY’s first arrival in Europe since their last Europe tour, TOUR15 THE UNSTOPPABLE LIFE, in May 2015,

Bassist Toshiya gave a short comment about the tour and mentioned how excited they are to come back and that they are planning to also play older songs!

It has been 3 years since our last time in Europe and we are all very excited about finally going back. We plan to play our older songs and also include new songs so everyone should look forward to our European shows. Plus, we want to enjoy touring Europe while taking in all of its history, beautiful architecture and amazingly rich culture.

Tickets are yet to go live but are said to commence on May 18, 2018, 18:00 CET over at Nine Lives Entertainment, where you will also be able to find more details about the tour. 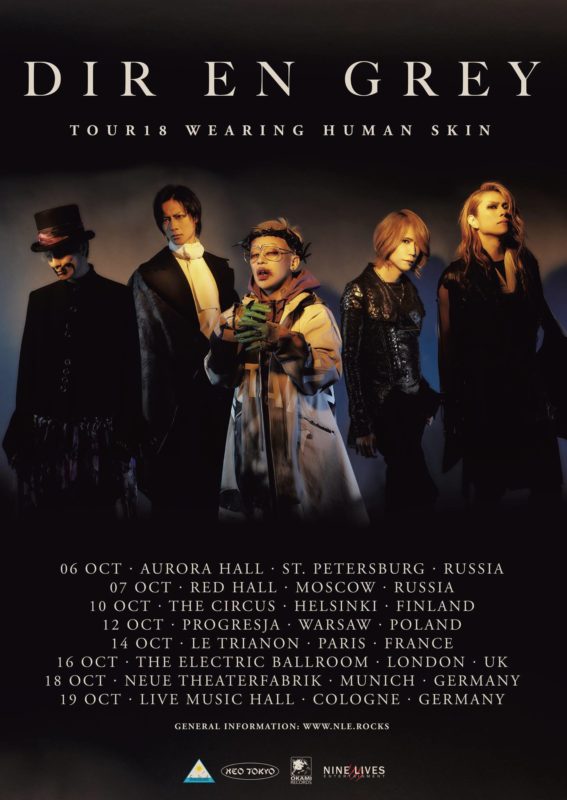