When I searched for the venue known as “Kraine Theatre”, the venue that MORRIE of DEAD END and Creature Creature decided to host his live show, I must admit it was difficult for me to find at first. Upon never hearing of this concert venue before at all, when I arrived I discovered it was a niche, hole in the wall venue of sorts, with limited capacity. There were many excited fans waiting in line, and even some with flowers for the Jrocker. Upon entering and waiting for the show to start, I sat down in what seemed like a nice small theater, and in front of us, a guitar amp, two electric guitars, an acoustic guitar, and a table containing a small bowl of guitar picks, and also two wine glasses- one with water and the other presumably wine.

The show began with all lights off, and the darkness of the room and quiet of the fans created a very tense atmosphere as we all waited for MORRIE to appear. When he finally entered through the door leading to the stage, he said nothing, promptly picked up his guitar and looked into the crowd, and began his performance. As he began his first song, Harukurue, one could notice this was indeed a very intimate, stripped down live show, with just MORRIE and his guitar. No effects were used until the last song of the encore, Heaven, where he used a loop in order to layer two guitar parts over each other. There was clearly a tension within the crowd, with people attentively listening. After the song was performed, the fans clapped and cheered MORRIE’s name, as he continued staring out to the crowd. There were times where he would speak to the audience in between songs, often times saying things that would make the audience laugh. “I hope you enjoy my show till the end”, he said, after introducing himself. “Or you can sleep too, I often am told that my voice is good for sleeping, like a lullaby” he said with a smile and laughing with the audience. Despite having such a serious and dark atmosphere through facial expression and clothing, MORRIE was clearly very personable on stage, and good at getting reactions from the crowd too.

Singing with not only operatic high falsettos but also clear deep tones, it is easy to see why MORRIE is loved by many visual kei fans. There is a sort of vibe to his voice that harkens back to the days of the 80’s and 90’s visual kei, giving a very nostalgic feel. The live itself was essentially the same throughout at its core, even the guitar tones MORRIE used throughout the show for each guitar didn’t change. It really felt as though he had stripped down the songs that were originally complex, into very simple, intimate songs. After he had performed his last song, he left quietly, leaving a somber atmosphere to end the live show. However, the audience was ready for more as there were people chanting “One more song!”. After a few moments, a staff member refilled the two wine glasses on the table which excited people, because they knew an encore was coming.

Overall, the performance was good in the sense that it fit the somber, melancholic mood of “Solitude” that MORRIE wanted to portray. After performing the last two encore songs, he talked to the audience about how he started Solitude in Japan a while ago and said how it was his first time performing here in New York. He expressed interest in coming back and hinted at maybe even bringing the band with him next time, which excited fans even more. After a long applause, and collection of gifts from fans, he thanked us with a smile, and thus, concluded MORRIE’s first Solitude performance in New York. 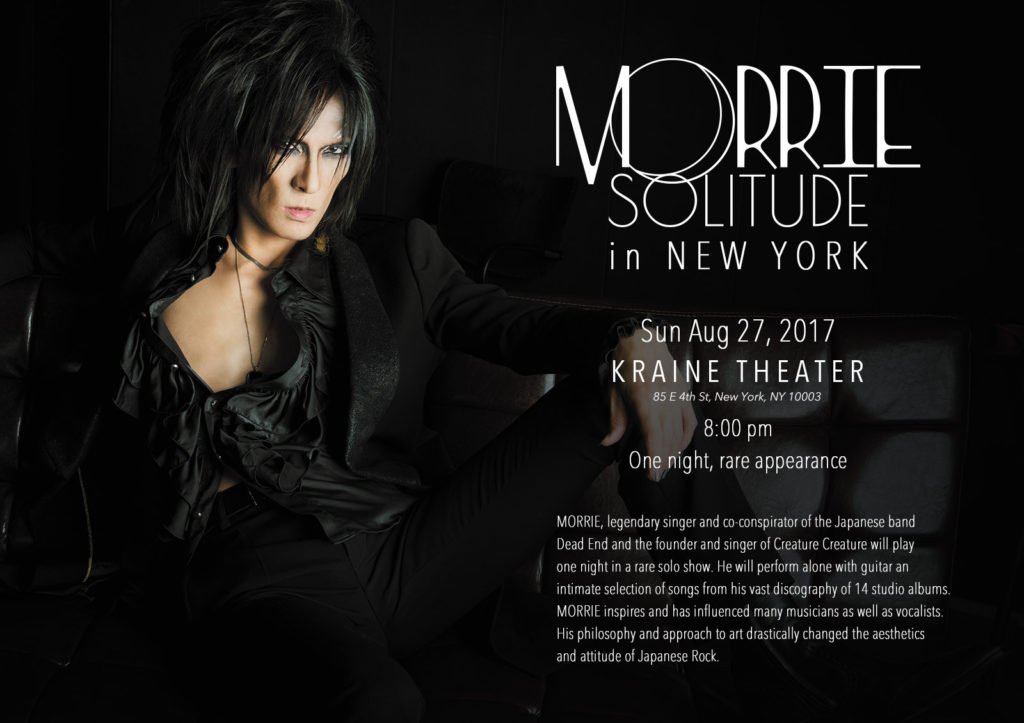