It sounds unbelievable, but the always young looking SuG has been around for ten years already! In order to commemorate such an event, the band has announced a best of album titled MIXTAPE, an archive collection, a 10th anniversary tour and a live performance at the prestigious Nippon Budokan!

The best of album is due to be released on March 8 in limited and regular editions. The first will contain 18 tracks selected by the members of the band and their music videos split in two DVD’s. The latter will just include a CD with the same amount of songs.

Their ARCHIVES -SuG 10th Anniversary Collection- will be released on the same day and it can be ordered exclusively at PSC webshop. The contents are three CD’s with 39 songs and two BD’s containing their music videos from 2007 to 2015 and their SuG VersuS 2016 EXTRA FINAL “COUNT DOWN”. Additionally, it includes a staff pass replica from SuG TOUR 2017.

The day after the release date, they will celebrate an event called SuG day at Ebisu Liquidroom and a few days later, SuG will embark on 39 LIVE ADDICT chapter1 THE BEST TOUR that will last two months. There will be a second and a third chapter which dates are yet to be confirmed.

Furthermore, the band will culminate the celebration by holding a live performance at Nippon Budokan on September 2!

Take a look at the dates and venues in the flyer below: 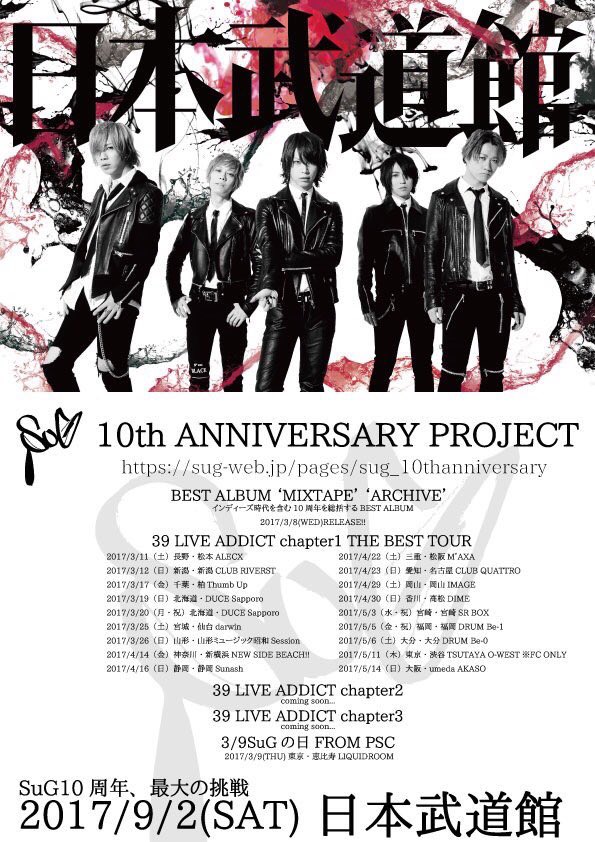 Finally, find the band’s new look below. The members are elegantly dressed in leather jackets: