Not only are SCANDAL celebrating their 10th anniversary this year, but they also released a new album titled YELLOW back in March (available in Europe courtesy of JPU Records), followed by an announcement that the band would tour Japan and properly for the first time, Europe.

They were already on the road for just over a week and a half, before finally arriving in London. Performing at a packed out O2 Academy Islington, the audiences anticipating the gigs start. A representative of the organizers B7KLAN urges everyone to make some noise to then leave the stage with the members wasting no time in getting into their positions, starting with the highly energizing intro song, Room No.7.

Lights flash on Mami as she takes centre stage to play the guitar solo for Onegai Navigation. Haruna begins the first MC of the night asking everyone twice over how they were doing, receiving a louder response the second time, going into Love Me Do next and afterwards, the summery Sunday Drive. 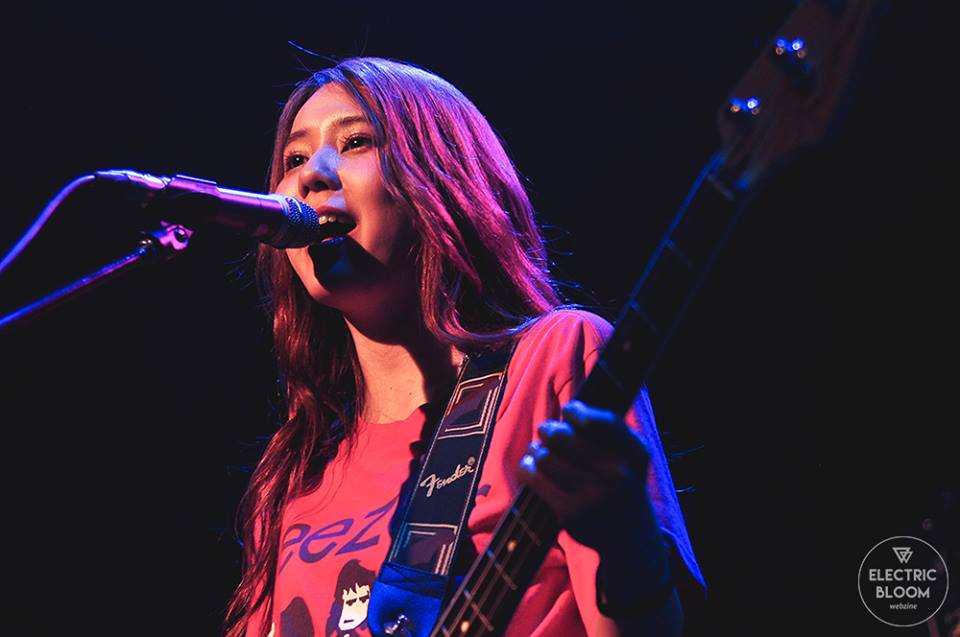 Bassist Tomomi in her element.

Konya wa Pizza prompts for a change in vocals as Tomomi takes over with her cute high-pitched singing as pizza-shaped balloons are knocked about. Haruna gets everybody to start clapping for their song, DOLL and shouting “Hey!” before the chorus.

The first set of lyrics for the next song confirm it’s the celebratory and reminiscent Sisters, all before Mami does the MC, mentioning that they arrived in London the day before, went to Soho, bought the T-shirt she was wearing on stage and had Japanese food. It shortly moves onto Tomomi who says that she wants to come back to London every year, before Haruna jokingly tells those who haven’t bought their latest album that they could buy it here.

This is followed by Morning Sun and their most recent single song, Take Me Out, that has Mami and Tomomi jumping about and drummer Rina flinging her hair from side to side, taking us to Awanai Tsumori no, Genki de ne and another MC before LOVE SURVIVE. The guitarists jump up and down for EVERYBODY SAY YEAH! that has the whole room copying them.

All before transitioning to Taiyou SCANDALOUS, Image and finally, Chiisana Honoo before leaving the stage. It didn’t take long at all for the encore shoutout to happen, and a few minutes later the girls returned to the stage once more, engaging in a jam session, showcasing their chaotic side.

Bringing us to fan favourite, Shojo S making the crowd go crazy along with the guitarists moving back and forth to dancing in the second half of SCANDAL BABY, who then gather in the middle, pulling faces at each other and act out the lyrics.

Many thanks to JPU Records for allowing us the opportunity to review this gig and to our friends at Electric Bloom Webzine for providing us with photos from the gig. If you want to see more, check out their site here.