American fans of BABYMETAL should be very happy to hear that the trio will be making a special appearance on The Late Show with Stephen Colbert! This appearance will be happening tonight, on April 5, so everyone should clear their schedules for tonight! BABYMETAL will also be making a musical performance on the show, mostly likely KARATE, from their most recent album, Metal Resistance, released four days ago. This marks BABYMETAL as the first Japanese artists to appear on the show. The show begins at 11:35 PM ET/PT,  so don’t be late! 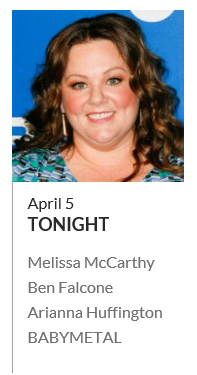 Apart from BABYMETAL, actress Melissa McCarthy, actor Ben Falcone, and Huffington Post founder Arianna Huffington will also be making guest appearances. You can all the info on the Late Night Show’s website.