We are excited to announce that the all female rock band GANGLION will release a new live DVD entirely produced by their guitarist Sagara!

The footage featured in said DVD will feature scenes of the final live of their first European tour celebrated at Shibuya Cyclone, Japan on April 25 as well as images of the band in their stay in Europe. You can already purchase the DVD at their live shows. Don’t worry overseas fan, you can also get your hands on it via their new official web-shop!

They also revealed new information on their upcoming digital single. It will carry the name NEVER EVER AGAIN and will be available through iTunes in 115 countries starting on November 4. While the digital edition will only contain the title track, there will also be a physical edition containing two additional songs. This edition will only be available at GANGLION’s live at Shinjuku LOFT on October 26.

If you have missed it, the band will be heading out to Europe for the second time this year! The tour will start in Japan on October 26 and will continue in Europe on November 14. Then, they will return to Japan for six more shows and a tour final one-man at Daykaniama UNIT on December 19. They will be selling their new DVD in Europe too!

Alongside the announcement of the DVD, the band unveiled the artwork of their upcoming single and a new look: 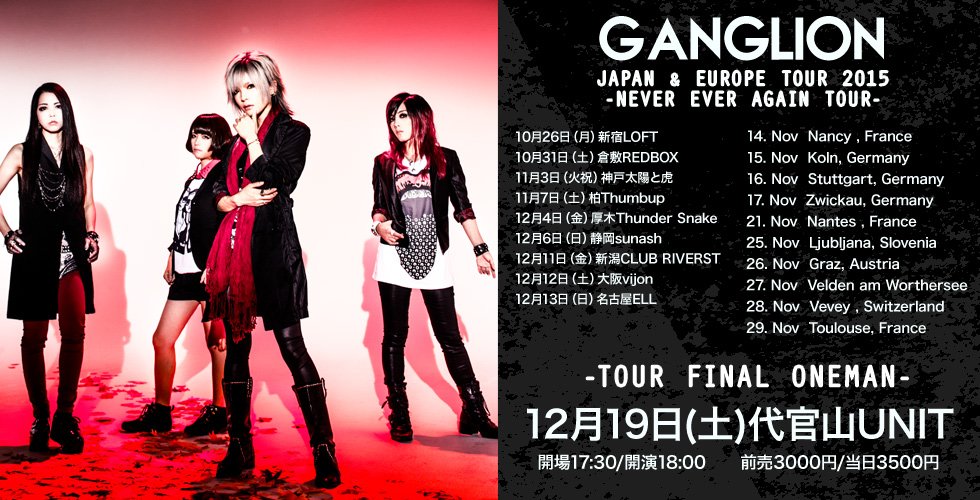